Bernie, Hillary go to war over Wall Street: Sanders gets upper hand as he pitches fix for financial industry 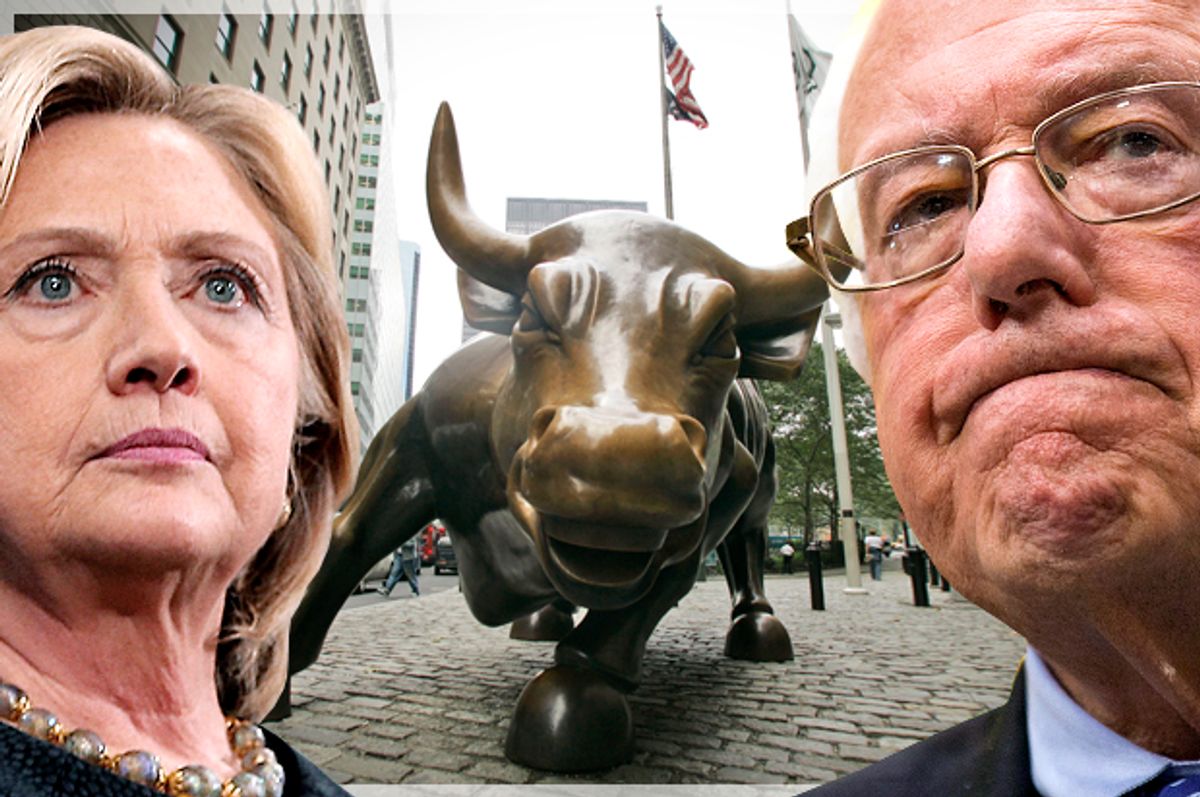 If you've seen the new film “The Big Short,” you know it was the greed of Wall Street, combined with the lack of regulatory control, that produced the 2008 economic crisis. You also know that nothing has changed. We still haven't had serious financial reform and, even more disturbing, most of the banks are now bigger than they were before the crash. In fact, as the Washington Post noted, “three of the four largest financial institutions are nearly 80 percent larger” than they were in 2008.

Of all the candidates, Bernie Sanders has been the most consistent when it comes to regulating the vultures on Wall Street. He's also the most credible, given his record and his refusal (in stark contrast to Hillary Clinton) to accept corporate funding for his campaign.

This week Sanders doubled down on his economic populism. In a speech on Tuesday, just a few miles away from Wall Street, the Vermont senator clarified his views on financial reform. “To those on Wall Street who may be listening today,” Sanders said, “let me be very clear...Greed is not good. Wall Street and corporate greed is destroying the fabric of our nation. And, here is a New Year's Resolution that we will keep: If you do not end your greed we will end it for you.”

Responding to Clinton's accusation that his proposals are too vague and simplistic, Sanders was especially clear about his intentions as president:

“If a bank is too big to fail, it is too big to exist. When it comes to Wall Street reform that must be our bottom line. This is true not just from a risk perspective and the fear of another bailout. It is also true from the reality that a handful of huge financial institutions simply have too much economic and political power over this country.”

What this means, and Sanders is quite clear about it, is that the big banks have to be broken up:

“If Teddy Roosevelt, the Republican trust-buster, were alive today, he would say 'break ‘em up.' And he would be right. And, here’s how I will accomplish that. Within the first 100 days of my administration, I will require the secretary of the Treasury Department to establish a “Too-Big-to Fail” list of commercial banks, shadow banks and insurance companies whose failure would pose a catastrophic risk to the United States economy without a taxpayer bailout. Within one year, my administration will break these institutions up so that they no longer pose a grave threat to the economy as authorized under Section 121 of the Dodd-Frank Act.”

While it won't make headlines, one of the most important proposals buried in Sanders speech has to do with tranforming the credit rating agencies, almost none of which are honest brokers. The Great Recession was only possible because of the bottomless corruption of these institutions, which knowingly issued triple-A ratings to fraudulent financial products. “Under my administration,” Sanders declared, “we will turn for-profit credit rating agencies into non-profit insitutions, independent from Wall Street.”

Sanders's speech is an attempt to create space between him and Clinton on a critical issue, and to undercut her critique of his plan to separate commercial banking, investment banking and insurance services by reinstating the Glass-Steagall Act:

“Now, my opponent, Secretary Clinton says that Glass-Steagall would not have prevented the financial crisis because shadow banks like AIG and Lehman Brothers, not big commercial banks, were the real culprits. Secretary Clinton is wrong. Shadow banks did gamble recklessly, but where did that money come from? It came from the federally-insured bank deposits of big commercial banks - something that would have been banned under the Glass-Steagall Act."

“Secretary Clinton says we just need to impose a few more fees and regulations on the financial industry. I disagree....My opponent says that, as a senator, she told bankers to 'cut it out' and end their destructive behavior. But, in my view, establishment politicians are the ones who need to 'cut it out.' The reality is that Congress doesn’t regulate Wall Street. Wall Street, its lobbyists and their billions of dollars regulate Congress. We must change that reality, and as president I will.”

This was a hard-hitting speech, and an indiciation of where the Democratic race is heading. The central theme of Sanders campaign, from the very beginning, has been reforming our crooked financial system. As Sanders noted on MSNBC's “Morning Joe,” he doesn't believe Hillary Clinton has the “courage” to stand up to Wall Street. In order to separate himself from Clinton, he has to communicate this message loudly and often.

Yesterday was another step in that direction.