Guns n' Roses reuniting, all grown up: How trading rock debauchery and drama for stability and unity will pay off 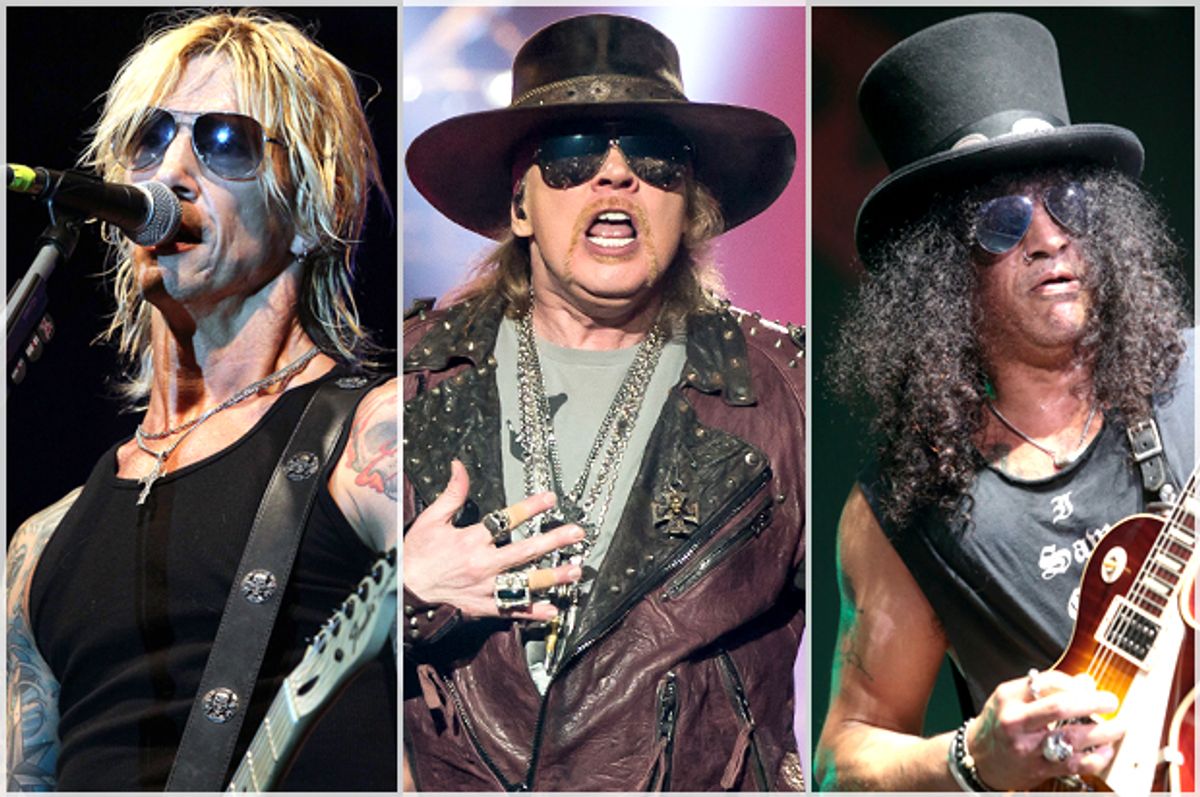 On Monday night, Coachella finally officially confirmed the worst-kept secret in the music industry: Guns n' Roses is headlining the Saturday nights of the annual two-weekend music festival, which takes place on April 15-17 and 22-24. To sweeten the deal, it was confirmed yesterday that the band's festival lineup will feature three-fifths of their classic configuration: frontman Axl Rose, guitarist Slash and bassist Duff McKagan. Who else is involved is unconfirmed, although it's heavily rumored that the trio will team up with core players from GNR's modern-day incarnation—including guitarist Richard Fortus, drummer Frank Ferrer, and long-time keyboardists Dizzy Reed and Chris Pitman—and even potentially add Velvet Revolver guitarist Dave Kushner into the mix.

While this news was certainly exciting, it wasn't unexpected. In the week between Christmas and New Year's Day, Billboard first reported the Coachella news, along with the fact that Guns n' Roses was potentially negotiating terms of a 2016 stadium tour. This article seemed to confirm reunion rumors that had smoldered ever since guitarists DJ Ashba and Bumblefoot left the group in recent years, McKagan played with GNR in 2014, and Slash let it slip to CBS News that he and Rose—who haven't played together since mid-1993 and split in 1996 amid creative and personality differences—were on fine terms. "[Rose and I] haven't really talked in a long time," the guitarist said. "But a lot of the tension that you were talking about has dissipated. We don't have all those issues anymore. There's not a lot of controversy." After simmering for much of 2015, the reunion buzz exploded anew in late December, after the band's official website swapped in the group's old-school logo and fans reported that a brief, mysterious video snippet featuring "Welcome To The Jungle" played before "Star Wars: The Force Awakens."

Still, Guns n' Roses is a notoriously mercurial band, and even as recently as 2012—when Rose decided not to show up for the band's Rock and Roll Hall of Fame induction—relations within the old-school lineup were shaky. In fact, until Slash and McKagan added the band-logo-in-the-Coachella-desert graphic to their respective Facebook pages on Monday night (and then had their involvement confirmed with a Tuesday press release) there was always some doubt about whether they would be rejoining Rose. After all, on January 1, the frontman facetiously tweeted, "The only thing I know 'confirmed' is my LOVE of Taco Bell! Mmmmm.... Taco Bell!! Happy New Years!!"

Naturally, the reunion also isn't free from controversy. The lineup question marks have angered fans, especially since Coachella tickets are going on sale this week, while the unclear status of "Appetite For Destruction"-era members Izzy Stradlin and Steven Adler (not to mention "Use Your Illusion"-era drummer Matt Sorum and guitarist Gilby Clarke) has also been frustrating. Stradlin's potential absence has especially caused consternation, since he wrote or co-wrote some of the group's best-known (and most-loved) songs, and has guested with the band at shows in recent years. Adler's rumored absence would be less surprising. Although he's been vocal about wanting a reunion, in an early fall interview with Eddie Trunk, he wasn't exactly charitable toward several of his former band members; among other things, he said McKagan was "judgmental and forgetful of where he came from."

And for this Guns n' Roses reboot to succeed, the band needs stability and unity, something which tended to elude them back in the '80s and '90s. That's why the heavily rumored expanded lineup would make sense, as on paper it seems designed to have the steadiest foundation. The trio of Kushner, McKagan and Slash formed the powerful musical center of Velvet Revolver, and already have built-in collaborative chemistry. Fortus and Ferrer, meanwhile, are ferocious players who have been in bands together off-and-on for two decades (notably in the '90s project Love Spit Love with Psychedelic Furs' Richard Butler) and have been in GNR since 2006. Because of this long-term musical relationship—both with each other and with Rose, Reed and Pitman—Fortus and Ferrer are a solid, grounding presence within the band, reliable performers who keep the energy high and avoid drama.

Indeed, although the GNR musical template is considered to be a volatile amalgamation of punk, hard rock and metal, the band has transcended its youthful rebellion. Slash and McKagan especially are much more serious players now. That's partly a function of sobriety—back in GNR's heyday, both were notorious addicts—and partly due to experience. Slash has toured and recorded extensively with Myles Kennedy and the Conspirators in recent years and explored soundtrack and session work, while McKagan has become a respected, best-selling author in addition to his musical activities. The men bring different creative influences to GNR in 2016, which will no doubt seep into and reshape even the band's most familiar songs.

That's not a bad thing at all—in fact, for GNR, it's perhaps the best possible scenario. As recent performances have shown, the band's songs endure: Hearing the Doppler-siren opening of "Welcome To The Jungle" remains as spine-tingling as it did back in the '80s, and there's intangible danger built into GNR's music that's yet to be duplicated by any band. But it's not 1991 anymore, and trying to capture that era's lightning in a bottle would be a mistake, if not a disrespectful gesture to both fans and the current lineup. Back then, GNR was a high-functioning, talented trainwreck that thrived almost in spite of itself. This dysfunction wasn't sustainable, however; in fact, it caused the band to fracture.

And as much as many want the rebellious, irresponsible GNR to come roaring back—thanks to the mythology shrouding the debauchery, excess and bad behavior of the 1987-1993 era—that's not feasible. There's undoubtedly a mind-boggling amount of money at stake on all levels of the operation, from the promoter guarantees on down to the price of concert tickets, which ensures that anything less than greatness—and on-time performances—is unacceptable. Plus, true loyalists want this version of GNR to succeed, simply because Rose, Slash and McKagan performing together again seemed so impossible for so many years. The unadulterated excitement over seeing them perform together again—or, for many fans, for the first time—trumps cynicism or the thirst for a mess.

Still, that doesn't mean a regrouped GNR will be sterile, boring or predictable. On the contrary, nobody's quite sure what the band will sound like in 2016, or how the players will interact with one another (much less navigate potential tour dates). In an era full of carefully strategized gestures, Rose is a throwback rock star who doesn't care about massaging his public persona; in fact, he guards his privacy fiercely and surfaces on Twitter only occasionally to tweet about animal rights and world affairs, or to unleash an emoji explosion. By extension, GNR is a refreshingly capricious wild card, a band shrouded in mystery whose moves are revealed only when the time is right.

It's hard not to characterize Axl and Slash burying the hatchet and performing together again like a victory lap, an opportunity for GNR to have a do-over and see what they can accomplish while clear-headed and free from the burdens of label pressures, tabloid frenzies and substance abuse. The gesture is certainly perfectly in line with Rose's paradox-driven personality: He's a notorious perfectionist and can be fickle—which explains the lack of new material released in the last few decades and the sudden cancellation of a "Jimmy Kimmel Live!" appearance—but he's also extremely ambitious and willing to take risks. In fact, it would be out of character for GNR to repeat themselves.

Sorum praised these qualities in a 2001 interview: "[Axl] wanted to heighten; he wanted to cross Guns over into super group. And he was very smart about the way he did it. He used to bring artists onstage with us: Elton (John), Brian May, Lenny Kravitz, Stephen Tyler and Joe Perry. … To a certain degree, I think the band achieved super group status because of the strategic things that Axl always thought up." What GNR circa 2016 might accomplish is certainly a question mark, but it's unequivocally punctuation buoyed by pure, optimistic possibility.