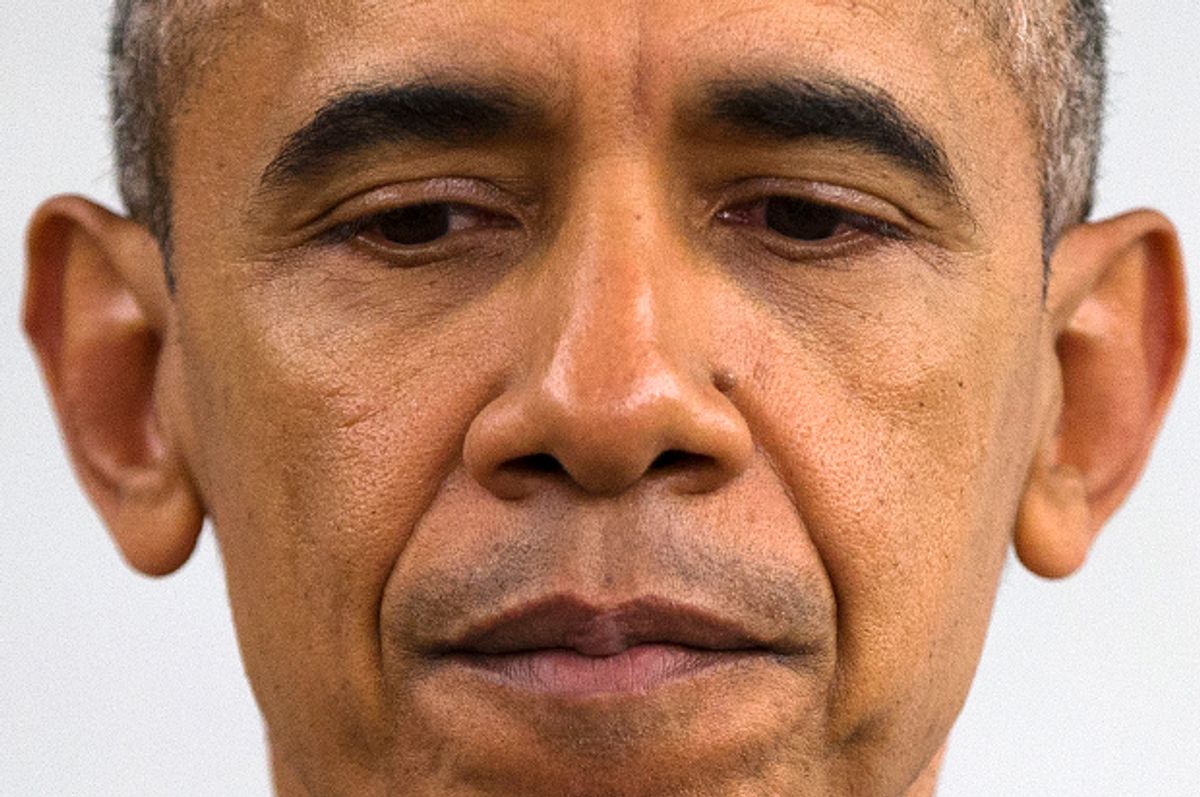 Once again, President Obama is resorting to executive action to effect some small degree of change he and his counsel feel to be within his presidential purview, this time on gun control. Fourth-quarter Obama has been impatient and bold, circumventing congressional roadblocks with executive orders to use what federal latitude he has to lead the way on immigration, the environment and economic inequality. The executive actions have elicited calls of “tyranny” from the right, but a unilateral move on guns, however marginal and constricted by executive elbow room, is the sort of thing to convince some conservatives that the trap they’ve imagined is finally snapping shut: Obama is coming for our guns. America is over. It was nice while it lasted.

Plus, it’s election year and just weeks ahead of the first caucus, so the rhetoric will no doubt be ratcheted further and further toward alarmism and offense. And it’s not just any election cycle, but one in which Donald Trump’s success forces ambitious Republican candidates to appeal to primary voters with far-right-wing rhetoric that might have disqualified contenders in a different political season. And it’s not just any sort of right-wing demagoguery that Trump’s political pace car has determined for the race but one of extraordinary otherization: A lexicon of fear and hatred of Mexican immigrants, Arab immigrants, the Chinese, black Americans and even women is what has established Trump’s shocking success. Before he was the surprise Republican front-runner, Trump was the nation’s most prominent birther, claiming that the nation’s first black president was a foreign interloper, the dark central character in the greatest conspiracy in American history: the theft of the presidency by a foreigner.

The discourse in the GOP field and in conservative media will continue to rage, and we’re likely to hear howls more apocalyptic than we’ve heard yet. Guns have been imagined as the ultimate backstop to Obama’s alleged “tyranny” and “oppression,” (armed rebellion, in other words) and a move believed to be a step toward taking those guns away is the far-right’s DEFCON 1. It’s freak-the-eff-out time for a good portion of the GOP, despite the fact that Americans’ wish to see the policies Obama desires is about as close to unanimity we get: A full 93 percent of Americans, and nearly 90 percent of Republicans, support background checks for all gun purchases, the centerpiece of Obama’s executive action. It’s not a controversial measure when presented to white Americans without Obama attached to it. But like we’ve seen so often since 2009, many of President Obama’s center-bearing policy proposals appear feasibly enactable until it’s Obama who proposes them. Then something happens.

Obama found himself an accursed Midas: A largely Republican plan for health insurance suddenly becomes “socialist tyranny” and the death of freedom when proposed and passed under Obama; the less-aggressive, less-unilateral Middle East policy Americans desired after Bush and Cheney, and which formed then-Senator Obama’s comparative advantage over Democratic rival Hillary Clinton and then GOP contender John McCain, suddenly becomes bumbling ignorance and cowardice (or worse); standard Keynesian stimulus during economic collapse, composed largely of massive tax cuts, is suddenly the fiscal straw from a profligate spendthrift that will break our national back; Wall Street reform to modestly rein in the almost universally maligned big banks is called an “outrage” by the leading establishment Republican candidate; the hyper-capitalist Trans-Pacific Partnership of the sort dreamed of by big business is now “an attack,” says the GOP front-runner. The list goes on and on.

The furor surrounding gun control might become the most pronounced instance of this phenomenon. During the Obama era, the right has increasingly celebrated the armed (usually white) defender of “American values,” whether it be George Zimmerman-type vigilantes or Bundy Ranch-style insurrectionists. Fox News exhaustively covered both the Bundy ranch and Oregon standoffs, offering seemingly countless friendly interviews to the armed lawbreakers. Guns are, for many white conservatives, the last defense against the specter of the black criminal, the oppressive government, the immigrant, the Muslim, or the combination of all four: Barack Hussein Obama. And now Obama--who is not really an American, according to the presumptive GOP presidential nominee; who is a Muslim, according to perhaps half of Republican voters; who doesn’t love, and thus seeks to harm, America, according to a staggering number of Republicans--is now committing his most dangerous, lawless act yet: taking away the good (read: white) Americans’ guns, leaving them defenseless against him.

Despite the clamor, the effect of Obama’s action will be minimal. Gun violence and mass shootings will almost certainly continue as though nothing was done. That’s because Obama, despite breathless conservative alarmism, is limited to a narrow band of options without legislation on gun control. Just like he was limited on immigration once the House defeated the bipartisan reform bill and he had to operate by executive action. Just like congressional refusal left him limited on the minimum wage, paid sick leave, mass incarceration, and other issues with wide support. Ever since the 2010 elections brought the Tea Party rebellion into Congress, Obama has faced historically unprecedented refusal to cooperate. Cooperation with the nation’s first black president was collusion.

The effect on its primary victims should be reason enough to want to destroy racism. The negative consequences of racism toward black Americans, whether it’s Tamir Rice or Barack Obama, is something felt squarely by them, not us white folks. But it’s worth considering how racism against a representative affects the represented, how none of us are left untouched by the racism against Obama. Writing in the Nation in 2011, Melissa Harris-Perry asked if “we are all black Americans now,” borrowing from Cornel West’s concept of the “niggerization” of America. Harris-Perry posited that in various contemporary circumstances white Americans feel “the stinging humiliation that routinely accompanies black life,” a “blackening of America.” But while Harris-Perry wrote more generally about how ”social, economic and political conditions that have long defined African-American life have descended onto a broader population,” we should, in beginning our appraisals of the Obama presidency, look at how a black president made us a black nation.

To the extent that Obama, because he’s Obama, will be kept from achieving widely agreed-upon gun control is the extent to which a white gun-violence victim in a white-on-white attack down the road will be killed, indirectly, by racism. There are white Southerners who need Medicaid to be expanded, for Obamacare to be fully opted into by their leaders -- but it’s called Obamacare, so that won't happen. White fear and hatred, and the incipient Tea Party backlash in 2009 abused the Affordable Care Act in utero, despite a Democratic majority in Congress. We are, each of us, affected by that, despite the direct object of the racism being Barack Obama. White people, like people of color, need the minimum wage to be increased to a livable level, and Obama’s proposal for a wage hike sees overwhelming support in polling; but conservatives reflexively see pro-middle-class policies as creeping totalitarian socialism when proposed by Obama. It is racism that has helped to keep wages down for all Americans. These phenomena can be seen at work on much of Obama’s otherwise popular policy aims during the last seven years, from being stymied on more economic stimulus (and having to rely on quantitative easing at the Fed) to the series of manufactured debt-ceiling crises and government shutdowns, which led to the nation’s credit being downgraded for the first time in history. We are poorer, more precarious and less physically safe, each of us, because of racism.

I should again be clear: It’s not my place to use the terms Drs. Harris-Perry and West employ. I’m not black and I can’t speak on what it’s like to be black, so I’m not willing to include us white folks in a “blackening.” But I can say that the racism directed at the nation’s first black president materially affects me, if much less acutely than it does people of color. We are all affected, quite directly and materially, by racism to the extent that racism animates the response to our first black president. It isn’t just that he’s the first president suspected by millions of white voters of being a foreigner; it’s that many of those white voters don’t have adequate health insurance because of it. The many white voters who believe Obama to be a Muslim are very likely the ones who would benefit from the minimum wage increases proposed by that “Muslim.” We find ourselves, all of us, at the mercy of our racism.