I went to a Ted Cruz rally -- and saw James Dobson, Steve King, white evangelical fervor and the scariest family band of all time

Now I understand why Cruz is winning Iowa. You would too if you saw this band sing "I Wish Kids Prayed in School" 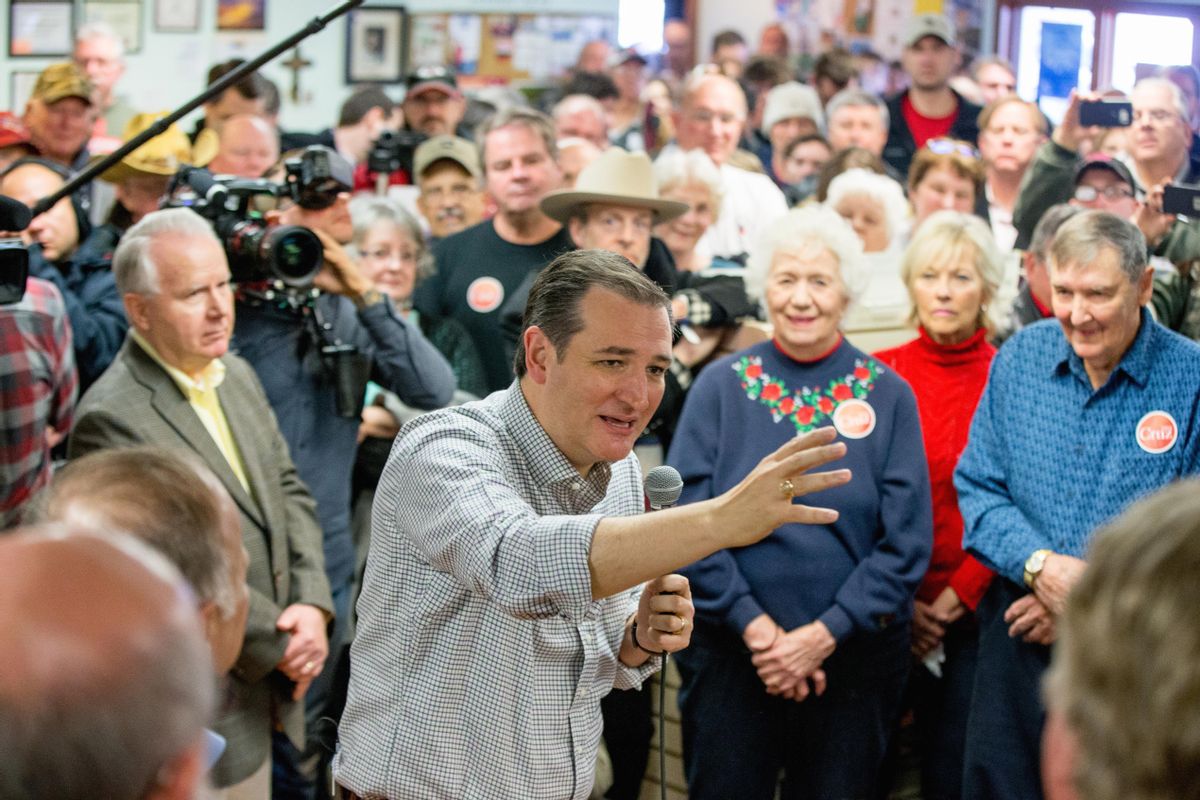 WINTERSET, Iowa — Those in the overwhelmingly white, senior audience at Republican presidential candidate Ted Cruz’s rally here left with little doubt as to why the Texas senator is dominating the state’s much-sought-after evangelical constituency.

Standing alongside conservative-values author and commentator James Dobson, Cruz swapped out his usual stump for an exchange that blended scripted sermonizing with red-meat fighting words against Democrats he said are fixated on abolishing religious liberty.

“If we allow non-believers to elect our leaders, we shouldn’t be surprised when our government doesn’t reflect our values,” Cruz said to widespread applause.

Cruz called for increased voter turnout among evangelical caucus-goers, using the type of overtly religious rhetoric that has galvanized support from social conservatives and propelled family-values candidates such as Mike Huckabee and Rick Santorum to first-place Iowa finishes in 2008 and 2012.

Cruz asked that attendees pray for him by asking for peace for his campaign, for the wisdom granted to the Biblical Solomon and for the well-being of his daughters, Caroline and Catherine.

Cruz currently leads all other Republicans in Iowa and has cracked the 30 point level in most poll averages – more than three points ahead than second-place finisher Donald Trump.

A family band garbed in red, white and blue kicked off the heavily produced affair, performing original Christian songs with lyrics such as “I wish kids prayed in school before classes” and “kids need a mom and a dad.”

“From the schoolhouse to the courthouse, they’re silencing His word. And now it’s time for all believers to make our voices heard,” they sang at one point.

A baby boy in the third row sitting near one of the massive speaker systems put his hands over his ears.

Cruz’s remarks came after introductions from Rep. Steve King and CEO of The Family Leader Bob Vander Plaats – both Iowans who have garnered past controversy for their stances on social issues.

Cruz promised to repeal all of President Obama’s executive actions, to abolish the Iran nuclear deal spearheaded by Secretary of State John Kerry, to reaffirm the United States’ commitment to Israel and to open a federal investigation into the controversial Planned Parenthood videos that surfaced in July. He also reiterated earlier claims that the GOP would know its nominee by the end of March.

His back-and-forth with Dobson, while obviously rehearsed, was received warmly by the roughly 400-person crowd. But some Iowans remain worried that Cruz may have an authenticity problem.

The Princeton debate champion previously worked as Texas’ prolific Solicitor General and earned national media attention in 2013 for his 21-hour-long filibuster on the Senate floor against Obamacare.

But it’s the candidate’s convictions, not speechifying, that make Maggie Wright, 70, a Cruz supporter. She said his faith has resonated tremendously with the people of Iowa.

“It energizes everything,” said Wright, a Texas native volunteering in Iowa as part of Cruz’s state Strike Force. “We’ve got to have someone who is a Christian first.”

John Reed, a 67-year-old Winterset native, earlier last year considered supporting Marco Rubio, Rick Santorum or Mike Huckabee, who he caucused for in 2008. But he decided to go with Cruz after sitting down with the senator at a campaign event in March.

“He was very generous with his time,” Reed said.

Reed said the importance of Cruz’s religion and social values to Iowans and South Carolinians is “probably higher than anybody will ever know.”

“I don’t have to compromise anything,” Reed said. “Ted Cruz – he’s me. He thinks like me. I’m convinced he believes the same things I do.”