There's a bit of wishful thinking in these pop culture sensations, too—that white men can calmly fight a good fight 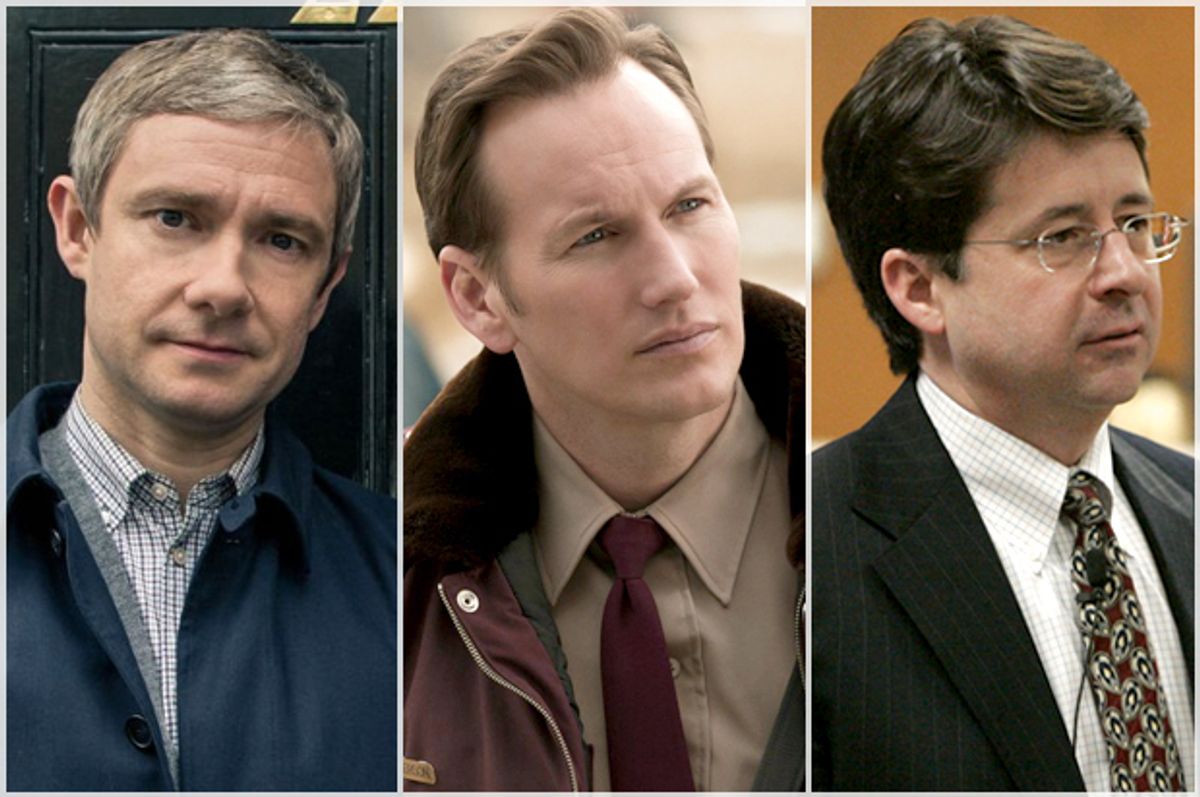 “A decade ago,” wrote Liesl Schillinger, “when a close friend of mine was going through a wrenching period in his personal life, and asked me if, as a critic, I could recommend a recent novel in which the male protagonist was not unhappy, was not drug-addicted or selfish, was not cynical, was not negative, did not screw up his relationships and let people down, was not on some level a bastard—who did not, in short, fail as a human, I was startled to realize that I could not think of one.”

As she points out, a good man is indeed “difficult to write,” because fatal flaws create dramatic tension. Even if they’re not serial killers or drug lords, male literary protagonists tend to be good at getting rich but suck at everything else. What’s the point of “A Little Life” except to uncover the main character’s deep dark secrets? What would be left of Christian Grey without his vanilla kinks? Nobody would read a book about him arguing the finer points of Thomas Piketty’s “Capital in the 21st Century” with Anastasia, even if he did it while counting out his billions.

Yet it’s not entirely the writers’ fault that touchstone male protagonists are jerks. Storytellers create characters, but it’s the public that buys them—or not. Conventional wisdom says that stories about nice guys don’t sell. And so we have reached a point where fantasy narratives have eaten the planet, and antiheros and superheroes are one and the same. Ironman/Tony Stark is a narcissistic womanizing asshole; Batman/Bruce Wayne is a self-absorbed prick; and Steve Jobs/Steve Jobs is a genius but a lousy human being. One man is real, one man is partially based on a historical figure, and one man is totally invented. But all three are filthy rich, fatally flawed (white) men who have achieved mythic status because flawed men are easy to write and the public is all too willing to live vicariously through their unselfconscious, fat-free adventures.

Yet escapism offers nothing by way of emulation, which is partly how we learn to participate in a functional society. We cannot aspire to be Superman or Wolverine because they have Powers, even as we are increasingly too-aware of our own political and economic powerlessness. More to the point, why would we want to be them? When they sit by themselves alone, glowering in the dark, these guys wallow in existential misery, as do all of the X-men and the Avengers. Cartoonish, these characters wrestle with personified inner demons, making them fun to watch yet utterly unsuitable as role models for being human.

Which is why we are awash in larger-than-life manly men yet Max Olesker could write: “It feels as if, as the traditional ideals of the 20th-century man–strong, stoic, repressed–begin to fade away, nothing has stepped in to replace them. In today’s pop-culture landscape there’s no single archetypal ideal that we’re supposed to emulate.” Arguably, however, there hasn’t been a hegemonic masculine ideal since the aftermath of the World Wars. We may reflexively turn to the Western as the definitive model for American masculinity, but the genre began to critique its own simplistic moral universe with “The Searchers,” 1956, which turned the archetypal white-hat cowboy, John Wayne, into a violent racist antihero. The western has been fracturing and refracting ever since, with the Man with No Name (Clint Eastwood) ironically taking the director’s chair and crafting revisionist films such as “Unforgiven.” Today, “cowboys” are rugged romantics on Brokeback Mountain, and at least four of the models playing the Marlboro Man have died of lung cancer.

Meanwhile, in the cities, the 21st century birthed the hipster, the metrosexual, the lumbersexual, the ammosexual and other -sexuals, these labels working to create a taxonomy of everyday types in the manner of 19th-century commentators trying to make sense of rapid social change. But even as doofus dads and sad sacks were busily taking selfies and trying mightily to draw attention to themselves, an unlikely new hero has been caught, however unwilling, on camera: the competent white male.

On the small screen, there have always been competent white male characters, though more often than not they’re supporting members of the cast. That secondary status started to change with BBC’s “Sherlock.” The breakthrough wasn’t Benedict Cumberbatch’s eponymous Holmes, who is a veritable catalog of literary male shortcomings, but Martin Freeman’s calmly effective army doctor, Watson. A veteran of the war in Afghanistan, Watson is also the chronicler of their adventures, making it clear that he has the power to write himself as the hero of these stories, yet his ego does not require it. The man in the center of everyone’s attention—the brilliant, charismatic Holmes--is there because Watson put him in that position, thereby complicating the power dynamic between them.

The success of “Sherlock” landed Martin Freeman on the 10-episode “Fargo: The Series,” where he played the screw-up, Lester Nygaard. It wasn’t until Season 2 of “Fargo: The Series” returned with an entirely new cast that it became a cultural phenomenon, and the surprise was State Trooper Lou Solverson (Patrick Wilson)-- a “new kind of male protagonist.” Noted Alan Sepinwall for Slate, Wilson “managed to turn Lou Solverson’s quiet decency and assured competence—traits that fly against most of what Quality Drama has taught us make for interesting characters—into riveting TV, in a leading-man performance I didn’t know Wilson had in him.” A veteran of the Vietnam War, Trooper Solverson loves his wife and kids, and tries to do the right thing in an obscenely violent world.

So do some of the defense attorneys in the Netfllix series “Making a Murderer,” which focuses on convicted murderer and rapist Steven Avery. Over the course of the 10-hour series, even as many viewers were so outraged by Avery’s situation that a petition was circulated calling for Gov. Scott Walker to pardon him, women found themselves developing a crush on Dean Strang, the convict’s bespectacled, middle-aged defense attorney. Why? The word that comes up, over and over again, is the same word used to describe Trooper Solverson: competent.

“I think what I love in particular is he [Strang] is the only competent one in this entire mess,” Lizzie Breyer says. “He fights hard for this guy who everyone else scorns, which is really appealing."

“It seems like half the Internet has fallen in love with these two non-descript, middle-aged professionals,” writes Molly Fitzpatrick, noting that the other defense attorney working on Avery’s case, Jerome “Jerry” Buting, has been getting fangirls too. “Buting and Strang are unfailingly brilliant, compassionate, and fiercely competent.”

Freeman, Wilson, Strang and Buting are middle-aged white men with pretty good hair, but the other common factor in their unexpected status as sex symbols is that they became more appealing the longer viewers stayed with them. It was their character, not their looks, that captured female hearts (and doubtless a few male hearts, too). It’s in juxtaposition to criminality and incompetence that guys like this start to look really good.

“Fargo,” a fiction, purports to be based on real events, even as “Making a Murderer" is a documentary whose persuasive power comes, at least in part, from its low-budget patina of authenticity. The evidence seems real; the various individuals appear sincere. But there is at least a whiff of nostalgia in the rise of the competent white man, who stands for a time when institutional whiteness wasn’t oppressive but just the way things were. But these men are not retrograde even if their values are traditional. They are adults with families and children, accepting responsibility and its consequences, and even accepting social change too. But slowly. As slowly as these series unfolding at a glacial pace, at least by the goldfish attention-span standards of the Internet.

It’s not irrelevant that the American locales—Minnesota, Wisconsin--for "Fargo" and "Making a Murderer" are Midwestern rural. In real life, the situation unfolding at the Malheur National Wildlife Refuge in Oregon is producing similar contrasts between #Y’allQaeda and #VanillaISIS on the one hand, and the competent white sheriff on the other. Faced with absurd and dangerous events, David Ward has emerged as a caring man focused on “protecting the residents” of the town and keeping the peace instead of provoking violence. The question isn’t whether these anti-government actors would have been shot if they were black. The question is why more lawmen everywhere, including in the urban areas, aren’t acting more often as officers of the peace.

So let’s hope that we see more of the competent white man in all aspects of everyday life, doing jobs that get done because they have to. It’s not that these men are perfect. It’s that they do their damnedest to be decent men because they know that humans are capable of doing terrible things. The more we can focus on and acknowledge people doing the right thing, the better we will all be for it.