The threat of terrorism in Iowa is minute, but GOPers continue to exaggerate the danger there — and everywhere else 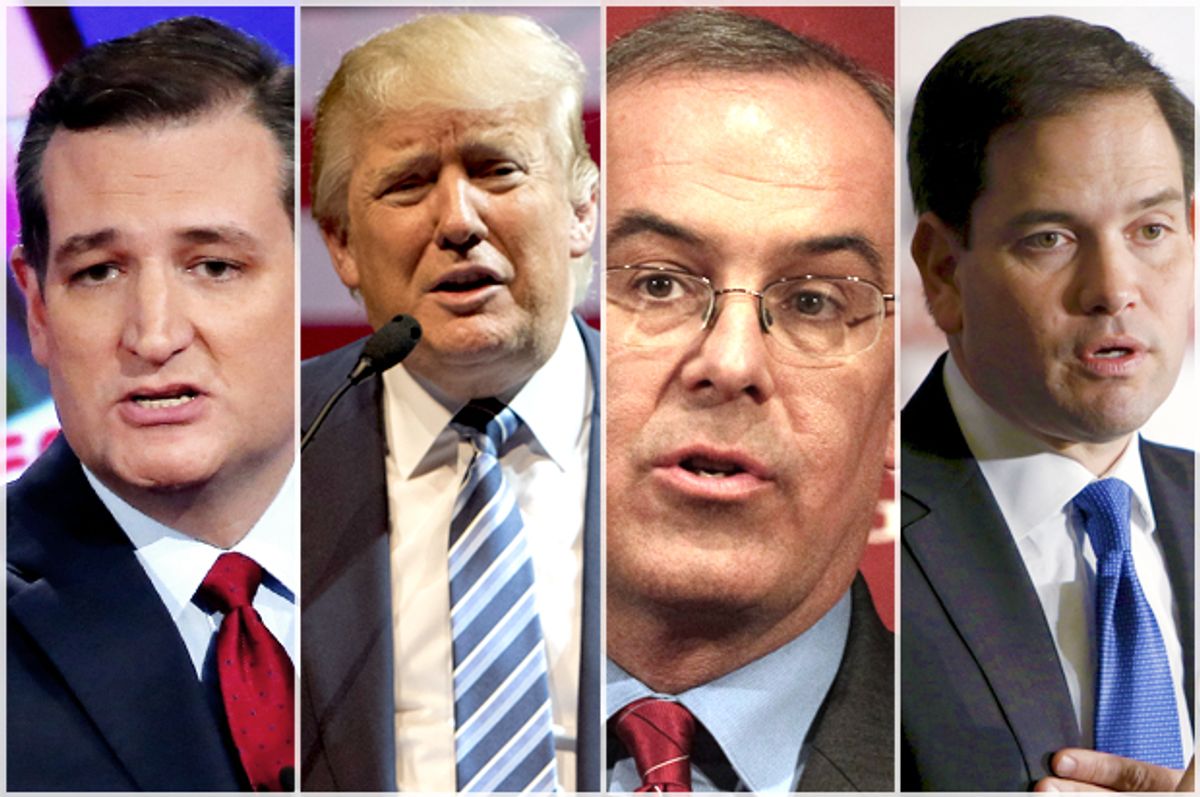 For 21st century conservatives, "fear" is not an authentic feeling of actual concern for your safety, but an ideological pose struck to justify the darker, more sadistic urges that motivate the Republican base.

In our day and age, declaring you want war for the pleasure of conquest or that you support racist policies out of unvarnished bigotry is socially unacceptable. So fear is donned as a costume to conceal the hate. The shivering coward is a more sympathetic figure than the snarling bigot, and so no matter how laughably implausible their posture of fear is, conservatives will strike it.

No where is this more obvious than in the Republican town halls and rallies that have taken over Iowa in the run-up to the primary. Jeremy Peters of the New York Times paints a picture of candidates and voters gathering together to act like they're huddled in a bunker while the Germans blitzkrieg London.

"This despairing tone was on display Monday as Republicans crisscrossed the country on the first full day of campaigning in the new year," he writes, "and began airing commercials that had a singular and sometimes fearsome focus on national security."

Donald Trump, of course, is grabbing all sorts of headlines with his first campaign ad that wallows in unbelievable levels of racism, conflating Mexicans with Moroccans and assuming that they all mean us ill. Ted Cruz is literally using this as an opportunity to play at being Clint Eastwood, as Peters reports:

Going slightly off-script and off-topic, Mr. Cruz also invoked a little gallows humor after someone’s phone rang with the whistling theme from Clint Eastwood’s “The Good, the Bad and the Ugly.”

“I will say this to everyone in Washington,” Mr. Cruz said, misquoting another classic Eastwood Western, “When you hang a man, make sure to hang ’em high.”

Chris Christie is ramping up the rhetoric about how we live in "dangerous, perilous times" and Jeb Bush, despite his claims to be the grown-up in all this, put out an ad declaring that we "are at war with radical Islamic terrorism" while trying to scare the rubes with pictures of the ISIS flag and machine guns.

Even Marco Rubio, who tends to play at being a genial guy, is all about pretending the barbarians are at the gates these days. "When America needed a bold plan of action from our commander in chief, we instead got a lecture on love, tolerance, and gun control designed to please the talking heads at MSNBC,” Rubio said in a speech on Monday. “The result of all of this is that people are afraid. And they have every right to be.”

The "right" to be afraid is an interesting concept. If fear is an authentic emotion, to have a right to have it is neither here nor there. Fear simply is. This permission offered by Rubio is less about allowing authentic feeling, and more of a gesture to the pageantry of all this, a way of saying the curtain is up and it's time for everyone to play their roles, to mimic the fear that justifies the hatred and irrationality.

All of which makes perfect sense, given the geography of this fear pageantry. Islamic terrorism is real, of course — no one actually denies this, as much as Republicans would like you to believe otherwise — but the likelihood of being hurt by it while living in Iowa ranks well below the risk of being killed by a horse kicking you in the head.

Islamic terrorist attacks are generally rare in the U.S., but when they do happen, it's in urban areas: Boston, New York, Paris. Even San Bernardino is still enmeshed in the suburban sprawl out of Los Angeles. The whole point of a terrorist strike is to cause maximum mayhem with minimal resources. You don't get that shooting up a parking lot in Des Moines. I mean, never say never, but the already low odds of being attacked this way get comically low when we're talking Iowa.

But none of that matters, of course, because the fear of Islamic terrorism is not a deeply held terror actually keeping most who claim to have it up late at night. On the contrary, it seems, in this country anyway, that the claim to fear Islamic terrorism is inversely proportional to the distance between your house and a place that might actually be hit by it. Either we have a serious mental health crisis going on in our country with all these paranoid delusions, or people are just play-acting this emotion for ideological purposes.

David Brooks, in his Tuesday column for the New York Times, tries valiantly to shape this affectation of fear into something slightly more logical, by trying to roll up the risk of your typical mass shooting (as well as other kinds of violence) in a great big bundle with Islamic terrorism:

In Israel, there’s the wave of stabbings. In this country we have shooting sprees in schools and in theaters. In cities there are police killings. In other places there are suicide bombings. This violence is the daily diet of the global news channels.

Nice try, dude, but that dog won't hunt. The same folks play-acting fear of Islamic terrorism in Cedar Falls do not generally think that police violence is something they have to worry about. In right-wing circles, mass shootings that aren't Islamic terrorism, which are the vast majority of them, tend to be treated more as gun-shopping opportunities and moments to pull faces about "mental health" before moving on and acting like it never happened.

This, more than anything, shows how the "fear" on display in Republican circles truly is a pose. No matter where you live in the U.S. — but especially if you live in heavily conservative areas — if someone comes into a public place to start shooting it up, the odds are exponentially higher that this person is some 20-year-old malcontent or some middle-aged man hyped up on misogynist propaganda than that they are an Islamic terrorist.

Any conclusions drawn from that fact are ideologically uncomfortable for conservatives. If you focus on the "how" it happened, the conclusion is that tighter gun control will prevent some of these mass shootings. But focusing on the "why" isn't much easier for the right. Most mass shooters of any age tend to be men whose grievances stem directly from the same thwarted sense of male entitlement — to women's attention or to status — that Fox News and company stoke day in and day out for political gain. Since none of the solutions are acceptable to the right, the problem of mass shootings is treated by and large as an unavoidable tragedy and not something to really be that afraid of at all.

But terrorism, at least Islamic terrorism? Islamic terrorism is politically useful, something the Bush administration figured out nicely by creating a "terror alert" system that former DHS head Tom Ridge has publicly stated was used to manipulate the polls in favor of George W. Bush. It laid down a patter that is being revived by Republican candidates today: They pretend to be worried, the voters pretend to be afraid, and the votes keep rolling in. Meanwhile, actual problems that really should worry voters, such as global warming, economic insecurity, and yes, even ordinary mass shootings and other kinds of gun violence, are denied or pointedly ignored. Because fear, at least on the right, is not an authentic feeling, but a costume to be donned or discarded out of political necessity.