The case against an Oscar nod for Jennifer Lawrence: She’s the best thing in “Joy" — and that’s not enough

Nominations are coming Thursday—and while everyone loves Lawrence, here's why she shouldn't get the nod this time 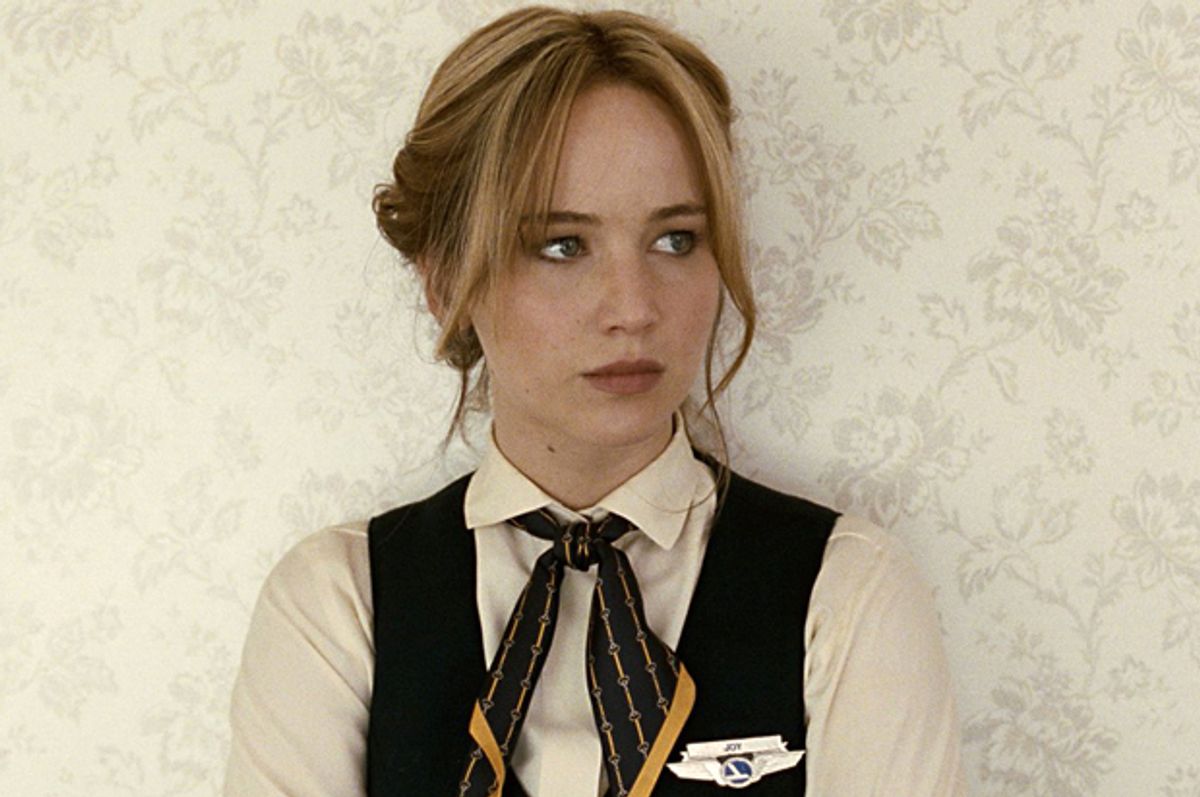 I once heard it said that the 2005 remake of “Bewitched”—starring a woefully mismatched Will Ferrell and Nicole Kidman—would have been a trainwreck, except that no one involved thought to “spring for the actual train.” “Joy,” helmed by the ever prolific David O. Russell, was also missing a train station, tracks and anyone to drive the damn thing. It’s a movie that loses its way early and stays lost—a mess of half-baked ideas and leitmotifs, discarded subplots, and actors working very hard to remind us of David O.’s earlier, better movies.

“Joy” is Russell’s first total disaster, but it has exactly one redeeming quality: Jennifer Lawrence. The “Hunger Games” actress is as accomplished in the role as we’ve come to expect, but it raises an interesting question: How do you evaluate an actor in a movie that fundamentally wastes her talent? This is the director’s third consecutive film with Lawrence, following “American Hustle” and “Silver Linings Playbook,” but her effortless charm can’t hide the fact that she’s incredibly miscast: Lawrence is about a decade too young for her character. Mangano was 34 when she patented the Miracle Mop. Lawrence is was just 23 when she signed onto “Joy.”

This is the same problem that plagued “American Hustle”: David O. Russell keeps casting his muse as disaffected 30-somethings at the end of their rope. If playing a self-destructive Long Island housewife (married to a balding Christian Bale, to boot) strains credibility, “Joy” tosses up its hands and laughs in credibility’s face. At the beginning of the film, Lawrence already has two kids and an ex-husband in the basement—along with boxes full of failed dreams. The movie repeatedly reminds us that Mangano was the valedictorian of her senior class, treating high school as if it were light-years away. But for Lawrence, graduation was just five years behind her during filming. That’s not a lot of time to become world-weary.

In “Joy,” David O. Russell completely forgets what age and appropriate casting are. Robert De Niro is a combined 27 years older than his on-screen love interests: ex-wife Terry (Virginia Madsen) and Trudy (Isabella Rossellini), a grieving widow with a conveniently rich ex-husband. Diane Ladd is technically the best fit to be his wife—a relatively modest eight years separate the two actors. Instead, Ladd fills the role of the beatific, wise old grandmother. Joy’s relationships have the same problem: The two men who share the screen with her, Bradley Cooper and Edgar Ramirez, are respectively 15 and 13 years older than Jennifer Lawrence.

This devil-may-care approach to casting shines a light on a bigger problem: The Verge’s Tasha Robinson argued that every single character in “Joy” “feels like a half-sketched first draft,” which is something of an understatement. There are no other characters or recognizable humans in “Joy,” which leaves Lawrence all but stranded in her own film, seemingly acting to the wallpaper. Jennifer Lawrence can do a lot of things, but she cannot be an entire movie on her own. As admirable and committed as her performance is, Russell does her absolutely no favors; the director might as well be throwing kettlebells at his star while she runs a marathon on-screen, trying to make this movie work. It never, ever does.

For her troubles, Jennifer Lawrence appears to be a shoo-in for an Oscar nomination. Lawrence has gotten nods at the Golden Globes and the Critics Choice Awards, currently the presumptive fourth pick after Brie Larson (“Room”), Saoirse Ronan (“Brooklyn”), and Cate Blanchett (“Carol”). On Gold Derby, Lawrence is just ahead of veteran British actress Charlotte Rampling—who, in my humble opinion, should win the whole thing for her quietly devastating turn in “45 Years.”

But even if her bid feels inevitable, it shouldn’t be: Jennifer Lawrence doesn’t need to be recognized for everything she’s in, especially when what she’s in is a hot mess. In 2012, Meryl Streep won her third Oscar for the Margaret Thatcher biopic “The Iron Lady,” one of the most miscalculated “serious” movies of the last decade. (It makes the life of Britain’s most divisive prime minister into a montage by way of “The Notebook.”) When reviewing the film, Roger Ebert remarked that it’s good to cast talented actors, but directors should also have the talent to know how to use them. “Streep creates an uncanny impersonation of British Prime Minister Margaret Thatcher, but in this film she's all dressed up with nowhere to go,” Ebert said.

What was so galling about Streep’s win is that the most nominated actress in academy history was going to have plenty more chances to win for movies that actually deserved her. (After all, she would nab noms two out of the next three years.) The rush to grant Meryl her third trophy left in the cold an actor who was even more deserving that year: Viola Davis, who landed what was then the role of her career in Tate Taylor’s well-reviewed “The Help.” No matter your feelings about the film’s politics (black women are still playing maids?), there’s no arguing with the fact that Davis is an utter revelation in it.

This year, Oscar voters face a similar dilemma. The 2016 best actress race is one of the most crowded in years—with strong contenders like Lily Tomlin (“Grandma”), Maggie Smith (“The Lady in the Van”), Charlize Theron (“Mad Max: Fury Road”), and Bel Powley (“Diary of a Teenage Girl”) seemingly left in the dust. All of those performances were in acclaimed films by directors who cast them perfectly. Theron, already an Oscar winner for “Monster,” gave us the best action heroine in decades, and her intensity is matched by the high-octane adrenaline rush of the movie around her. With Lily Tomlin playing a septuagenarian lesbian matriarch, “Grandma” is peak Tomlin—brash, funny and surprisingly moving. It’s the best she’s been in years.

Should any of these women get snubbed, it shouldn’t come as a surprise. I understand why Jennifer Lawrence very well may end up with yet another nomination this year, which would be her fourth overall. It’s the same reason that David O. Russell keeps throwing her in every movie he makes, no matter how wrong she is for the part: Everyone—including myself—absolutely adores Jennifer Lawrence. The brazenly honest starlet is one of the best things to happen to Hollywood in a very, very long time. While other actors stick to the expected script, Lawrence creates her own—whether that’s doing shots before a talk show appearance or speaking out about pay inequality in the industry.

When Lawrence didn’t make the final five in a really weird SAG nomination pool, Vanity Fair’s Joanna Robinson wrote: “[I]f you have the opportunity to invite J.Law to your awards ceremony, why wouldn’t you snap it up?” Robinson is absolutely correct: The Oscars are about putting on an entertaining show starring people we admire as much as the evening is about recognizing quality. Eventually, though, we have to learn that love simply isn’t enough. We might indiscriminately adore Jennifer Lawrence and want everything for her, but that’s how she got into a mess like “Joy” in the first place.