Cliven and co. are fond of invoking the Constitution during their armed run-ins with the law. Only one problem... 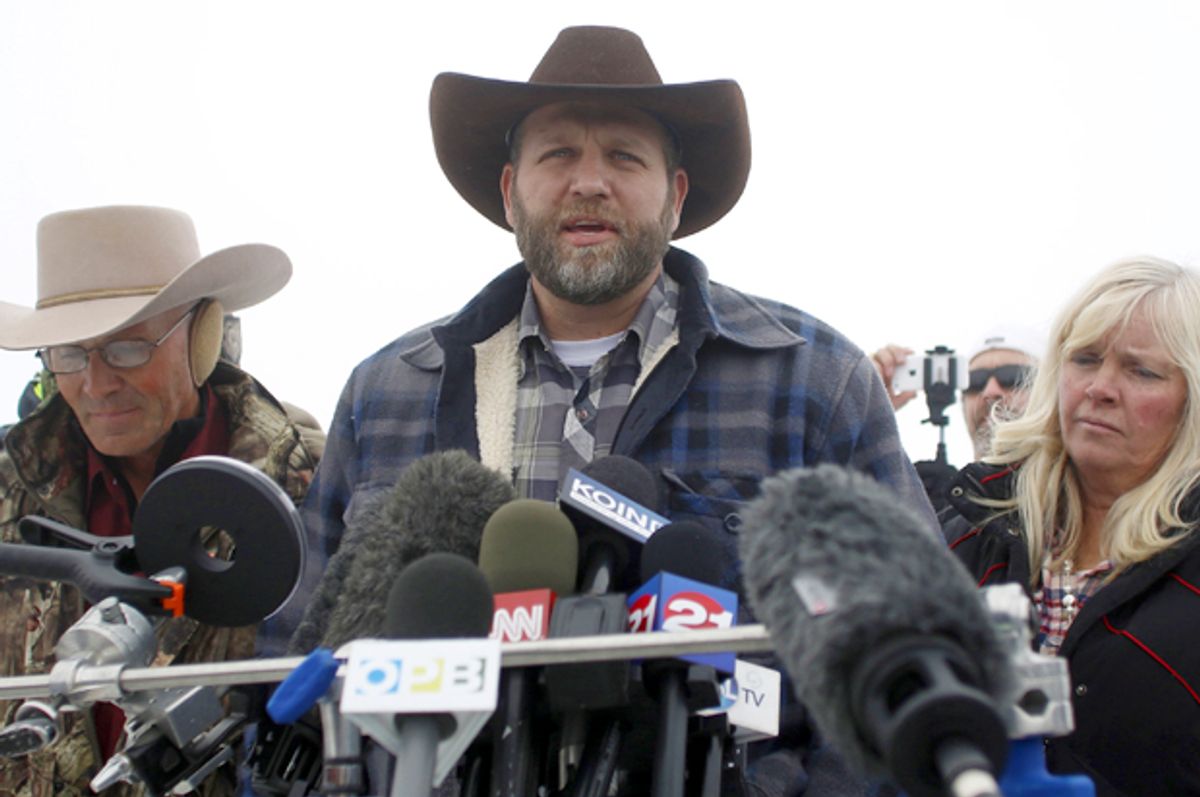 Over the weekend, the sons of notorious Nevadan rancher Cliven Bundy took over the main office building at the Malheur National Wildlife Refuge, with what the media has kindly labeled a "militia," in protest of the recent re-sentencing of local Oregonian ranchers convicted of arson on federal land, and, more explicitly, in protest of the federal government itself. Anyone who is familiar with the 2014 incident involving the Bundy patriarch and his standoff with the federal government -- after the Bureau of Land Management (BLM) began seizing his cattle over unpaid grazing fees on federal land (amounting to over $1.2 million) -- more or less knows what the Bundys believe.

Ultimately, their gripe is with the federal government owning land, period. They appear to believe that public land is unconstitutional and even tyrannical, and that they shouldn’t have to pay grazing fees or face any kind of penalty for setting fire to public property. Indeed, the ultimate goal of this “occupation” is for the federal government to relinquish control of their land, so that ranchers like the Bundys can do as they please. “What we’re doing is not rebellious. What we’re doing is in accordance with the Constitution,” said one of the sons, Ryan Bundy.

Of course, this has no basis in reality. In the Constitution, the Property Clause does in fact give the federal government the power to own land. In a study done by the nonpartisan Congressional Research Service (CRS), the researchers assert: “The Property Clause gives Congress authority over federal property generally, and the Supreme Court has described Congress’ power to legislate under this Clause as ‘without limitation.’” PunditFact further disassembled this claim back in 2014, during the Bundy standoff.

The Bundys and their type have never been well known for constitutional scholarship; indeed, Cliven, who has previously claimed not to recognize the federal government, but to “abide by all of Nevada state laws,” seems to be completely ignorant of his own states’ constitution, which declares that “the Paramount Allegiance of every citizen is due to the Federal Government.” Of course, there has always been a mythology surrounding the Constitution and its framers, and anti-government zealots tend to have this innate sense that the founders were just like them, and equally despised any kind of government.

To learn that the Constitution was written and ratified to create a strong central government that could properly collect taxes (to pay off tremendous war debts) and prevent or deal with local rebellions and insurrections would no doubt confuse Cliven and Ammon, who seem to consider themselves disciples of the founding fathers. As University of Richmond Professor, Woody Holton, writes in his book, "Unruly Americans and the Origins of the Constitution":

“The wave of insurrections and threats that swept over the United States during the 1780s — and more important, the [tax] relief legislation that the rebels managed to extract from lawmakers and local officials — convinced many of the nations more prominent citizens that the time had come to launch a rebellion of their own.”

Before the Constitution was ratified, only states could levy taxes, and state legislators were very much prone to providing tax relief for desperate citizens, particularly because of the close proximity of constituents and the ever-present threat of rebellion. This made paying off war debt close to impossible, which affected the countries economy at large, with wealthy individuals and foreigners — many of whom speculated in war bonds — avoiding investment altogether. It also weakened the already weak government. “Tax relief crippled government operations,” writes Holton. “Even worse, it prevented public officials from meeting their single largest obligation, namely servicing the enormous debts they had amassed during the war. When Congress and the states failed to redeem the war bonds or even pay interest on them, Madison declared in Federalist Number 10, the owners of the securities were not the only ones who suffered. By begetting a 'prevailing and increasing distrust of public engagements,' this terrible 'injustice' had doomed the state and federal governments themselves.”

In a sense, the Constitution was written to deal with tyranny; though not the tyranny of the state, but that of anarchy. Its ultimate purpose was to create a less democratic state, with governing elites who were isolated and shielded from the will of the masses (only Representatives in the House were directly elected by the voters in the original Constitution), and who, most importantly, could levy and collect taxes to pay off the war debt. (Many of the Constitutions signers and supporters held war bonds themselves, which made ensuring debt payments even more important.) What makes all of this so ironic is that the Bundys were the kind of Americans who the founding fathers felt it necessary to contain.

Just a few of years after the federal government's formation, Secretary of Treasury Alexander Hamilton led a militia of about 13,000 troops to crush the Whiskey Rebellion in Western Pennsylvania. The resistance was in response to a newly applied excise tax on distilled spirits, and there were some legitimate grievances, particularly the fact that whiskey was used as a means of exchange in that region, which meant the excise tax resulted in a de facto income tax on the poorest citizens, who were paid in whiskey. By the time Hamilton and the militia arrived, the rebellion had more or less collapsed.

The Bundys do not have legitimate grievances, as many of the poorest Americans did at the country's formation. In fact, the Bundys should be grateful to pay the federal governments grazing fee, which is about 93 percent less than the market price, charged by private owners. While the Bundys claim to be fighting against big-bad-tyranny, they are really fighting for free lunch. As others have pointed out, the Bundys would probably be out of business if it wasn’t for various government handouts. But it just isn’t enough.

Refusing to pay taxes (fees) and rebelling against the government would have no doubt earned condemnation from the men who these hypocrites claim to admire. George Washington may have even sent in the troops (although the Bundys and company are ultimately a small group of disgruntled malcontents). The myth that the framers wrote the Constitution to ensure some kind of libertarian utopia has persisted for a very long time, and it will continue to persist for a long time yet — and, unfortunately, cynical opportunists like the Bundys will continue to exist until human beings cease to exist. Fortunately, there is an antidote to their mindless assertions and demands: facts.