Bill Clinton is a political liability: In a race against Bernie Sanders, his neoliberal legacy could be toxic

While he's done much to reform his image over the past several years, Bill Clinton still comes with many red flags 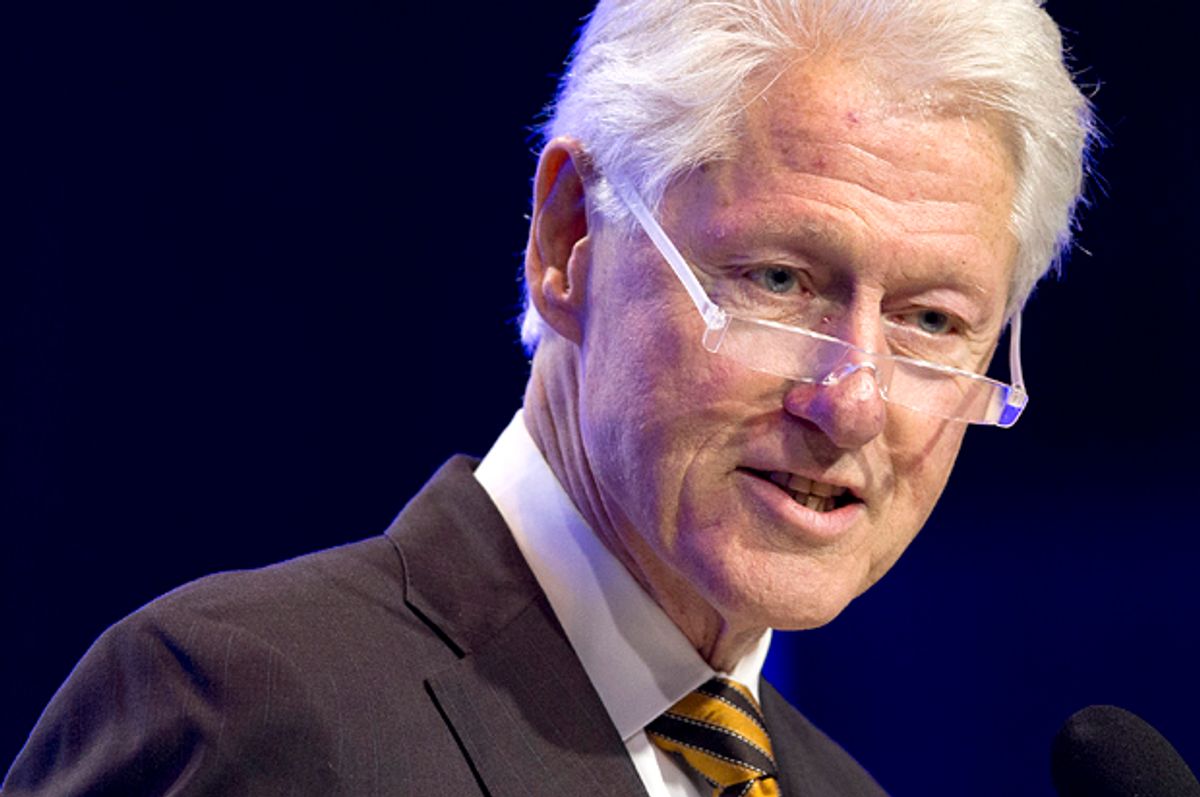 On Monday, former President Bill Clinton hit the campaign trail in New Hampshire, after remaining largely on the sidelines since Hillary Clinton announced her candidacy back in April. His first solo speech, however, was not the great success Hillary has surely hoped for. As Michael Sainato describes in the New York Observer:

“During [Bill’s] speech, several women on stage had noticeable trouble paying attention to Mr. Clinton, and acted thoroughly unimpressed with what he had to say. The event itself had few attendants, and those who did turn out in support of Ms. Clinton seemed lethargic at best.”

Responding in typical fashion to the news that Bill would be hitting the campaign trail, Donald Trump wrote on Twitter: “If Hillary thinks she can unleash her husband, with his terrible record of women abuse, while playing the women's card on me, she's wrong!”

Hillary should have other concerns, however, about unleashing Bill. While he does have one of the highest favorability ratings among living presidents, and is one the most charming politicians in existence, he also did a lot more to advance a neoliberal and even right-wing agenda during his time in office than most Democrats or liberals like to remember. Indeed, Clinton had a great talent for providing lip service to the political left while delivering to the political right.

The right-wing’s hatred of Bill Clinton has always been rather ironic, considering he was more conservative than liberal, and provided the American right with some of the most reactionary legislation. As Christopher Hitchens wrote in his anti-Clinton polemic, “No One Left to Lie To,” Clinton signed “legislation that was more hasty, callous, short-term and ill considered than anything the Republicans could have hoped to carry on their own.”

The most notorious element of Bill’s reactionary legacy -- especially among progressives -- is his administration's close ties to Wall Street, including a deregulatory agenda that no doubt contributed to the financial crisis and the continuing problem of too-big-to-fail financial institutions. In 1999, Clinton signed the Financial Services Modernization Act into law, which repealed the Glass Steagall Act, allowing commercial banks, investment banks and insurance companies to merge into massive financial institutions, which had been banned since the 1930s. Notably, this gave Citigroup -- which had formed one year earlier in a merger between Citicorp (commercial banking) and Travelers Group (Insurance), after being provided a temporary waiver from the Federal Reserve -- permanency. One of the foremost advocates of this legislation, Treasury Secretary Robert Rubin (who was chairman of Goldman Sachs before joining the Clinton administration), would go on to work for Citigroup after concluding his public service, and receive more than $100 million in compensation.

The administration's refusal to regulate the derivative market may be an even more notorious blunder, as we all know what became of unregulated derivatives.

Clinton also ardently supported and signed the North American Free Trade Agreement (NAFTA), which provided corporations with an abundance of cheap labor and new investment protections, while destroying manufacturing jobs, suppressing real wages, and undermining collective bargaining power. And then there is welfare reform, or the Personal Responsibilities and Work Opportunity Act (a title that would suit Paul Ryan’s dream legislation). This “reform” ended federal entitlements and instead handed federal money over to the states for them to implement their own welfare models, which ended up creating a system rife with racial bias. (This is unsurprising, considering the fight for welfare reform was always based on the notion that African-Americans -- e.g., “welfare queens” and “strapping young bucks” -- were abusing the system.)

Hillary was a strong supporter of this reform.

Outside of economic issues, the Clinton administration wasn’t much better. The now notorious Defense of Marriage Act (DOMA), which prohibited the federal government from recognizing same-sex marriages, haunted Hillary a few months back, when she made the claim that it was a “defensive measure” intended to prevent even worse measures by Republicans. This was immediately challenged by Sen. Bernie Sanders, I-Vt., and gay rights activists as revisionist history. This, along with "don’t ask, don’t tell," does not paint the picture of a very gay-friendly administration.

The list goes on and on. The Telecommunications Act of 1996, which deregulated the media industry and allowed media-cross ownership, contributed to the increasing consolidation of the corporate media, and today, six massive corporations control around 90 percent of the media, compared to around 50 companies in the early '80s. Bill Clinton was also a major proponent of “law and order,” and during his first campaign, made a point of returning to Arkansas to oversee the execution of Ricky Ray Rector, an African-American man who had committed two homicides and then shot himself in the head, resulting in a partial lobotomy that left him mentally disabled with an IQ of about 70. Clinton made Rector a part of his campaign, making a point that he was tough on crime. (After the execution, the prison chaplain would resign in protest.) True to his word, Clinton was tough on crime, and in 1994 signed the Violent Crime Control and Law Enforcement Act, the largest crime bill in the history of the United States, which provided billions in funding for new prisons, as long as they adopted draconian policies, such as reductions in parole eligibility. By the time Clinton left office, the number of people in American prisons rose by nearly 60 percent (and we are today the leading carceral state in the world).

Now, a couple of things should be made clear. First of all, Hillary Clinton is not her husband; this has become a tiresome and unnecessary disclaimer, yet it still needs to be made. Secondly, Bill has, to his credit, apologized for much of his reactionary legacy, including DOMA and "don’t ask, don’t tell," the unregulated derivatives market, and the crime bill.

Still, this does not change the fact the Clinton administration was more reactionary than progressive, more opportunistic than principled. And when Bernie Sanders, who voted against most of Clinton’s neoliberal legislation, is Hillary’s prime challenger, it may be wise to keep Bill on the sidelines, and for Hillary to distance herself from his legacy. Recently, however, she has been doing the opposite, and has started to fully embrace the “Clinton school of economics.”

“Talking about the Clinton economy, evoking the success of Bill Clinton’s economy, she is positioning herself as a growth Democrat,” said Jon Cowan, former Clinton administration official and head of centrist think tank Third Way, to the New York Times.

It is possible that Clinton believes the Sanders threat has greatly diminished, and that she can now revert back to the center in preparation for the general. (This is the kind of political opportunism we have come to expect from the Clintons.) This would be unfortunate for progressivism, and would certainly not help Clinton in attracting support from Sanders adherents.

Ultimately, stepping up Bill Clinton’s role in the campaign is a risk, and not because of Donald Trump’s juvenile attacks of his private life. As Frank Bruni writes in the Times:

“[Bill] remains both widely charismatic and maddeningly undisciplined. He connotes both prosperous times and cynical scheming.”

It is the cynical scheming and unprincipled politics of Bill Clinton, and to a lesser degree, Hillary, that has helped Sanders become such a factor in 2016. He has brought a kind of incorruptible authenticity to a corrupted political game, and because of this, Bill should remain on the sidelines.