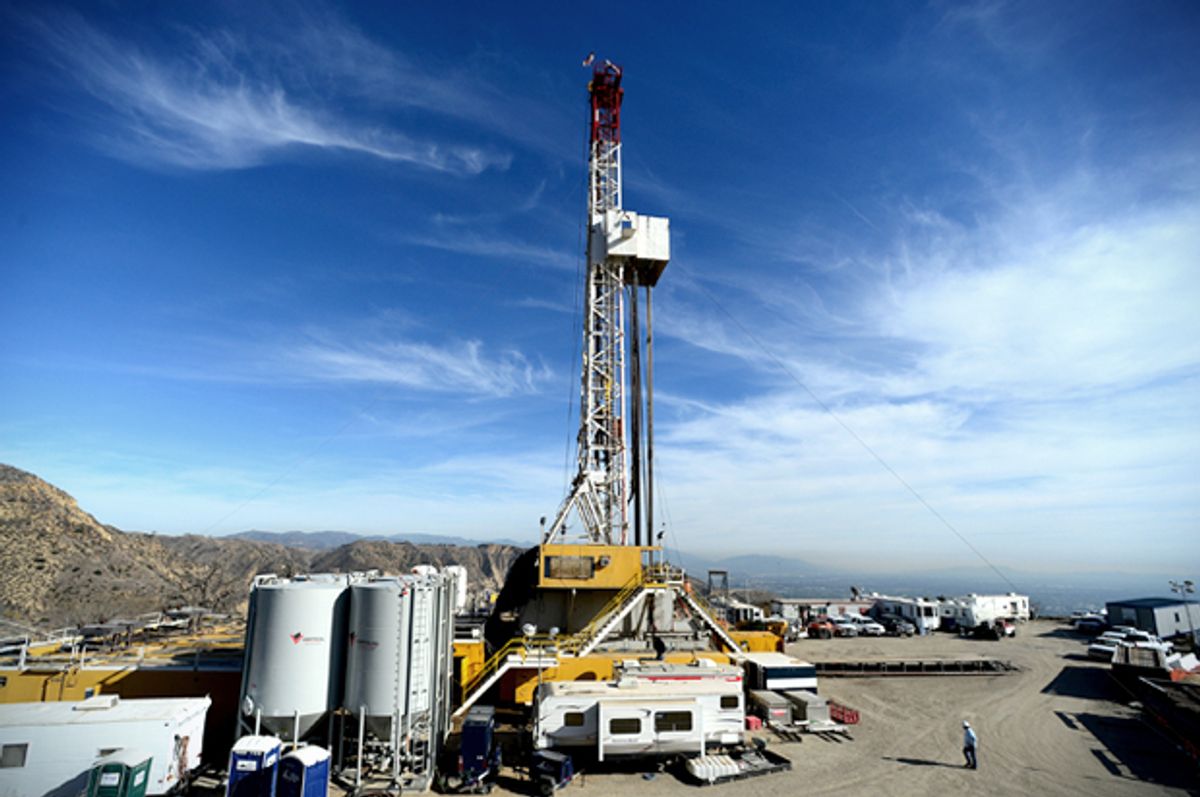 If you don't live on the West Coast of the United States, you might not have heard about the massive gas well leak that's been venting natural gas into the atmosphere at a rate of more than 100,000 pounds per hour for more than two months.

Infrared video that the Environmental Defense Fund captured in December shows that the natural gas is billowing like a volcano just above Burbank, California, on a hilltop in the Aliso Canyon area. That video was taken over a month after the leak started on October 23, after the well had already ejected an estimated 80,000 tons of methane into the atmosphere.

For perspective, 80,000 tons of methane is equal to about a quarter of what the entire state of California—which is the eighth largest economy in the entire world—emitted between October 23 and November 20, 2015. And methane, which is what's mostly in "natural gas," is actually a much stronger greenhouse gas than CO2 in the short term, during the first 20 years it's in the atmosphere it can be up to 80 times more potent than CO2.

According to the Washington Post, the impact of the gases that have already been released from this one volcanic leak is equivalent to the impact, over 20 years, of six coal-fired power plants— or 7 million automobiles. But this leak isn't just a crisis for the climate; it has also forced the evacuation of 1,700 homes in nearby neighborhoods, the closing of two schools and countless residents have reported that the stench has made them ill.

So how did all this happen?

Engineers are speculating that a seven-inch pipe ruptured about 500 feet below the surface, but they won't know for sure until they are able to seal the well off completely, something the Southern California Gas Company says may not happen until March.

But according to a recent report from the Los Angeles Times and a lawsuit from local residents, the initial leak isn't what made this an environmental disaster for the history books. No, the real problem here goes way back to 1979, when the Southern California Gas Company had the original safety valve removed from the gas well, and then simply didn't bother to replace it.

Mind you, it's not like the well was new in 1979—it was already a quarter of a century old in 1979—and 36 years after the company cut that corner, the well finally ruptured at 61 years old. A spokeswoman told the Los Angeles Times that they didn't replace the safety valve simply because the company wasn't required to by law. So the company simply didn't replace the valve, because the profit motive of a corporation means that it has no incentive—no motivation—to protect anyone or anything that it isn't required to protect by law.

Because the company didn't replace the valve, the company estimates that it could be another three months before they can plug the well completely.

This is a case where corporate greed and lax regulations have caused a massive disruption in California's energy infrastructure and forced the evacuation of thousands of homes and seriously jeopardized any emissions cuts that California has achieved over the last few years. And none of it would have happened if we hadn't handed the management of our energy infrastructure over to largely deregulated for-profit corporations that only care about their bottom lines.

Civics has fallen by the wayside in US education, but this case makes it clear that it's time to have a real civic conversation about private and public goods, and about where private ownership ends and where the public commons begin.

This natural gas leak isn't just an environmental disaster; it's an atmospheric catastrophe like we've never really seen before. Thousands of people have been displaced from their homes, their communities forced to scatter and the climate has been put even further in jeopardy, just because a for-profit company wasn't required to replace the safety valve on their aging well.

This example proves the importance of treating our nation's energy infrastructure as a part of the commons. To do that, we need strict regulations—including enforcement mechanism including fines and jail for executives—that dissuade corporations from cutting corners at the expense of communities and the environment. And we need to lift the liability cap that allows fossil fuel companies to only pay a fraction of the damages that they cause to communities and to the environment.

It's time to start treating the commons as something owned by every taxpayer and to be preserved for future generations, instead of something to be exploited for present private profits and left as trash for the taxpayers to pay for and future generations to clean up.

Thom Hartmann is an author and nationally syndicated daily talk show host. His newest book is "The Crash of 2016: The Plot to Destroy America — and What We Can Do to Stop It."