It's fun to hate on Billy Joel — almost as fun as it is to hate on Fallon — but together, they hit a sweet spot 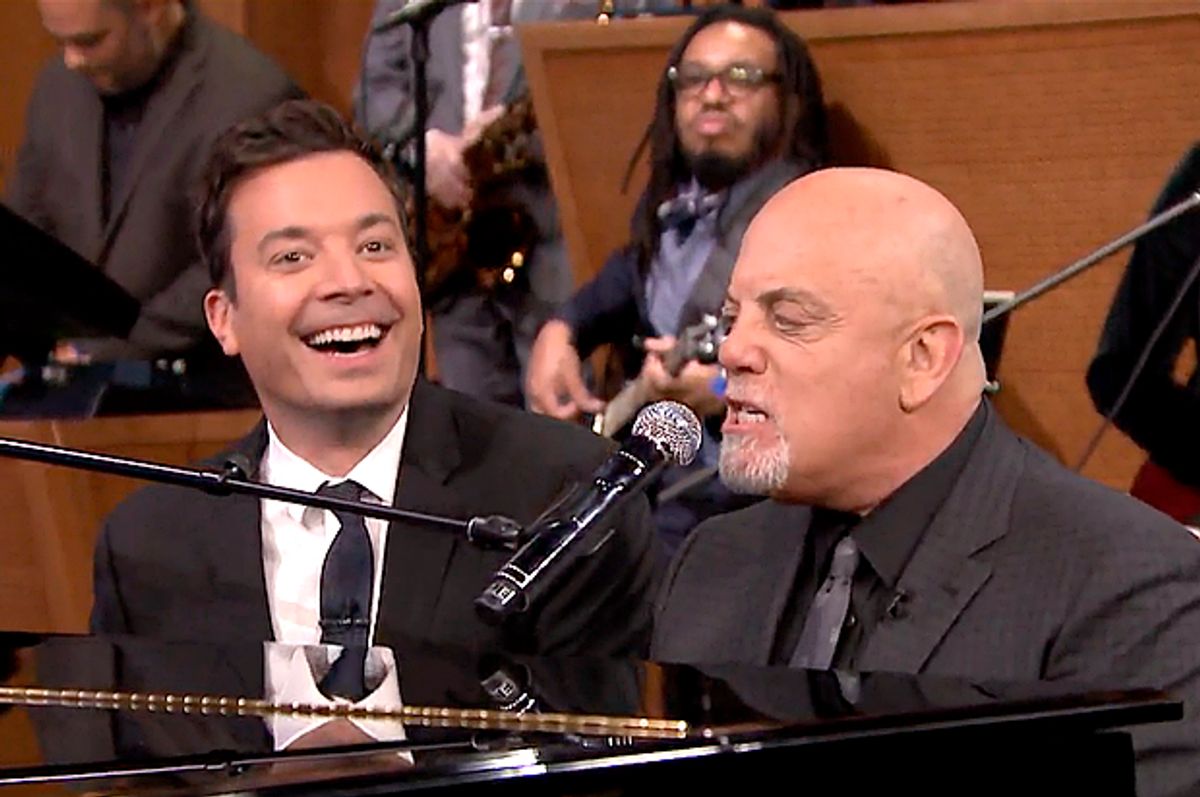 Between his smug manner, lame songs, and mannered singing (“heart-attack-ack-ack-ack-ack”), there’s a lot to dislike about Billy Joel. He writes catchy melodies, but his enormous popularity and riches remain a mystery.

Why do we hate him? Is it his fault that songs like “Piano Man,” “Uptown Girl,” “We Didn’t Start the Fire,” and “Only the Good Die Young” were drilled into our heads on ‘80s radio? Maybe, maybe not, but somehow The Beatles and Jimi Hendrix and other overplayed bands don’t leave us feeling overdosed on their music quite the same way: It takes a lot longer to get sick of “Ticket to Ride” and “Hey Joe” than it does “Just the Way You Are” or “Movin’ Out.”

But the combined powers of the Roots, and Jimmy Fallon, and the Rolling Stones are enough to even allow Joel a pretty good performance of “Beast of Burden,” which he and Fallon belted out last night. Okay, we’re shocked too. But this ain’t bad.

It begins with Fallon’s usual combination of charming and awkwardly tongue-tied; then the two launch into one of the Stones’ best, eternally fresh tunes.

Part of what’s surprising is that Joel isn’t straining his voice, and he’s imitating Mick Jagger in a playful way that’s a relief from his usual style. The Joel-hater in me is thinking, I can’t believe it, but he’s actually pulling this off. Fallon’s version of Jagger, which comes next, is so much closer and more fun that when Joel returns for a second helping, Mr. Piano Man has been pretty completely shown up.

Fallon has been in the news a lot for his boozy behavior, and for injuring his finger: “Tripped and caught my fall (good thing)!” he tweeted. “Ring caught on side of table almost ripped my finger off (bad thing).”

Some people I trust find Fallon shallow or bro-ish or too eager to please. But his moderate musical talent and huge love of music combine to make him a lot of fun to watch. Colbert is a better interviewer and politically a thousand times more sophisticated. But Fallon, whatever his faults, can really put a song across. Even sitting next to Billy Joel.

Where does Joel hatred come from? Perhaps the best explication comes from fellow Long Islander Ron Rosenbaum, who starts off talks about the painter Andrew Wyeth (who he likes a lot less than I do) and Denis Dutton’s engaging book, “The Art Instinct,” about the roots of the aesthetic impulse in early, savannah-dwelling homo sapiens.

Which brings me to Billy Joel—the Andrew Wyeth of contemporary pop music—and the continuing irritation I feel whenever I hear his tunes, whether in the original or in the multitude of elevator-Muzak versions. It is a kind of mystery: Why does his music make my skin crawl in a way that other bad music doesn't? Why is it that so many of us feel it is possible to say Billy Joel is—well—just bad, a blight upon pop music, a plague upon the airwaves more contagious than West Nile virus, a dire threat to the peacefulness of any given elevator ride, not rock 'n' roll but schlock 'n' roll?

I'm reluctant to pick on Billy Joel. He's been subject to withering contempt from hipster types for so long that it no longer seems worth the time. Still, the mystery persists: How can he be so bad and yet so popular for so long? He's still there.

For Rosenbaum, for what it’s worth, Joel’s specific breed of badness is his “unearned contempt,” which he calls both self-righteous and self-congratulatory. He even speculates on a New York Times “career re-evaluation” piece, which actually did arrive as a New Yorker piece written with the magazine’s usual elegant writing, but here a bit, uh, misapplied. Chuck Klosterman has also tried to defend Joel.

All this aside, Joel did not ruin the song, and for that I’m grateful. But the finger-snapping version of “The Longest Time” that comes later is just as annoying as you’d expect.

The lesson? Maybe it’s that Joel can be bearable some of the time, especially when he’s singing someone else’s music.