"Like Play-doh that's been warmed up": Why we can't get enough of viral videos like "Lesbians touch penis for the first time" 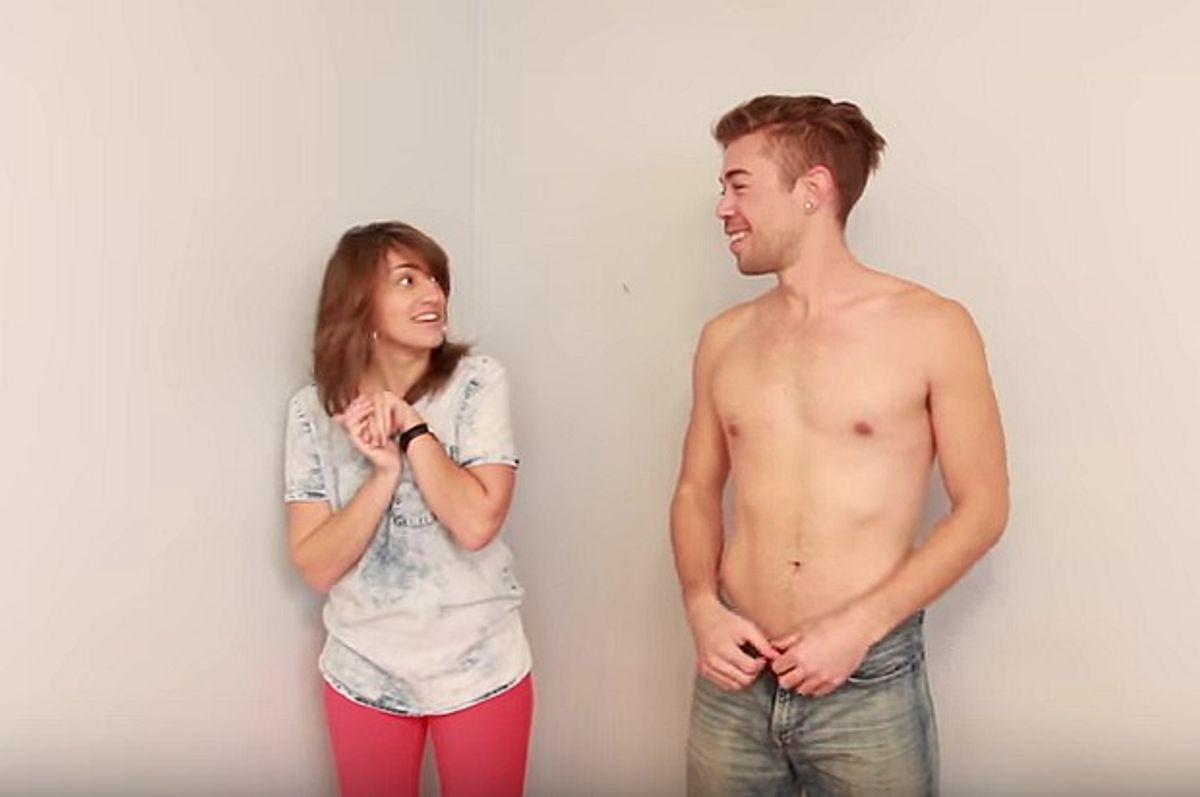 If you had never touched a penis before—and maybe you haven’t—how would you describe it? That’s exactly what the YouTube channel BriaAndChrissy sought to find out by giving four lesbians their first-ever grope—with the generous assistance of actor Aleks Malczewski, who volunteered his member for the project. “It feels like Play-Doh that’s been warmed up,” one woman commented. Another was even more descriptive: “It feels like a hotdog that you took to a picnic, then left the hotdog out, then you went back and thought 'oh this hotdog is still ok,' but then you feel the hotdog and it's a little hard.”

“Lesbians Touch Penis for the First Time” is sweet and a bit silly, but this genre of viral videos and Internet-based projects is an important tool in breaking down the uncomfortableness (and even disgust) we often have about each other’s bodies. The video follows Davey Wavey’s “What Gay Guys Think About Vaginas” and “Gay Men Draw Vaginas,” which examined gays’ complicated relationships with female bodies. In an interview with the Huffington Post, Keith Wilson and Shannon O'Malley—the creators of GMDV—called it “gay vagina anthropology.” Many men drew surprisingly anatomical depictions of the female form, while depictions were comic and even surreal.

Speaking with Anna Pulley of the East Bay Express, O’Malley said that a particularly telling entry in the campaign was a drawing of a Rubik’s cube. The image particularly stuck out to her as an illustration of the cultural baggage we have around genitalia that’s different from ours. “The Rubik's cube says, ‘I struggle with this vagina and I can't figure it out,’” O’Malley said. If that sketch speaks to apprehension and confusion around a foreign body part, other images speak to feelings of fear and horror. Gay men commonly drew women’s genitalia as monstrous figures equipped with razor-like fangs, akin to the vagina dentata myth depicted in “Teeth.”

Any gay man who has ever had the subject of vaginas come up in conversation knows that these themes are common in how we discuss the female body amongst ourselves—coded as “weird” and “gross.” It’s an unfortunate trend that calls upon the most base misogyny of the gay community, but it’s as much a product of misinformation as it is casual sexism. As Eva Gantz wrote for the Good Men Project, the men in Wilson and O'Malley’s survey weren’t even drawing vaginas. “Every one of the sketches portrays the outer genitals, most commonly the clitoris and vulva,” she writes. This mistake is a very common misconception (the vagina is what’s on the inside), and it makes sense the men would unintentionally reproduce that myth.

That lack of knowledge isn’t merely the problem of gay men; even heterosexual males and women might know little about the female reproductive system—or about how anyone’s genitalia really works, if you get down to the specifics. In a 2014 Reddit thread, many straight men reported finding vaginas “unappealing” or “funny looking,” but these comments was largely due to how little some men knew about them. It’s easy for myths and stigma to proliferate if you have no idea what’s going on down there. “When I was new to intimacy, the va-jay was so foreign it was actually kinda of scary,” one man wrote. “So scary that I wouldn't say I derived any pleasure from seeing it.”

These projects aren’t perfect: Gantz points out that a female-centric focus on vaginas unintentionally erases trans men, while videos like BriaAndChrissy’s have the potential to create as much stigma as they combat by affirming similar ideas about penises. If you think that men are the only ones who have a diversity of opinions on anatomy, clearly you’ve never gotten drunk with a room full of women. In a memorable moment from the infamously awful Ben Affleck-Jennifer Lopez vehicle “Gigli,” Lopez’s character derisively compares the penis to a “sea snail” and a “long toe.”

These anthropological surveys should be challenging these ideas at the same time that they open the subject up for discussion. If stereotypes about human anatomy are a product of a society that gives us little knowledge about ourselves and others, there’s so much public sex education work that we need to be doing. By demystifying our privates, viral videos can offer an important step—but they should only be a step. I hope they encourage all of us to keep learning about the realities and experiences of others, whether that’s by consulting our search engines or engaging in respectful dialogue. After all, penises and vaginas are as diverse and complex as the people they are attached to.

Next time, instead of simply asking people what they think about the anatomy of the opposite gender, I’d love to see channels like BriaAndChrissy start a conversation. How do men feel about their penises? What is their relationship to their bodies like? Why do these women think the way they do about the male anatomy? Where do those ideas come from? It’s one thing to ask women to cop a feel, but an even better mission is to learn to ask the right questions. In doing so, we can make all of our private parts a little less secret.

Watch this highlight video of lesbian women touching a penis for the first time.