Maybe Joe Biden should have run after all: 6 ways the election would have changed if he did — and why Trump totally lucked out

This election season would've been even more intense if Biden went for it, and he would have gone hard after Trump 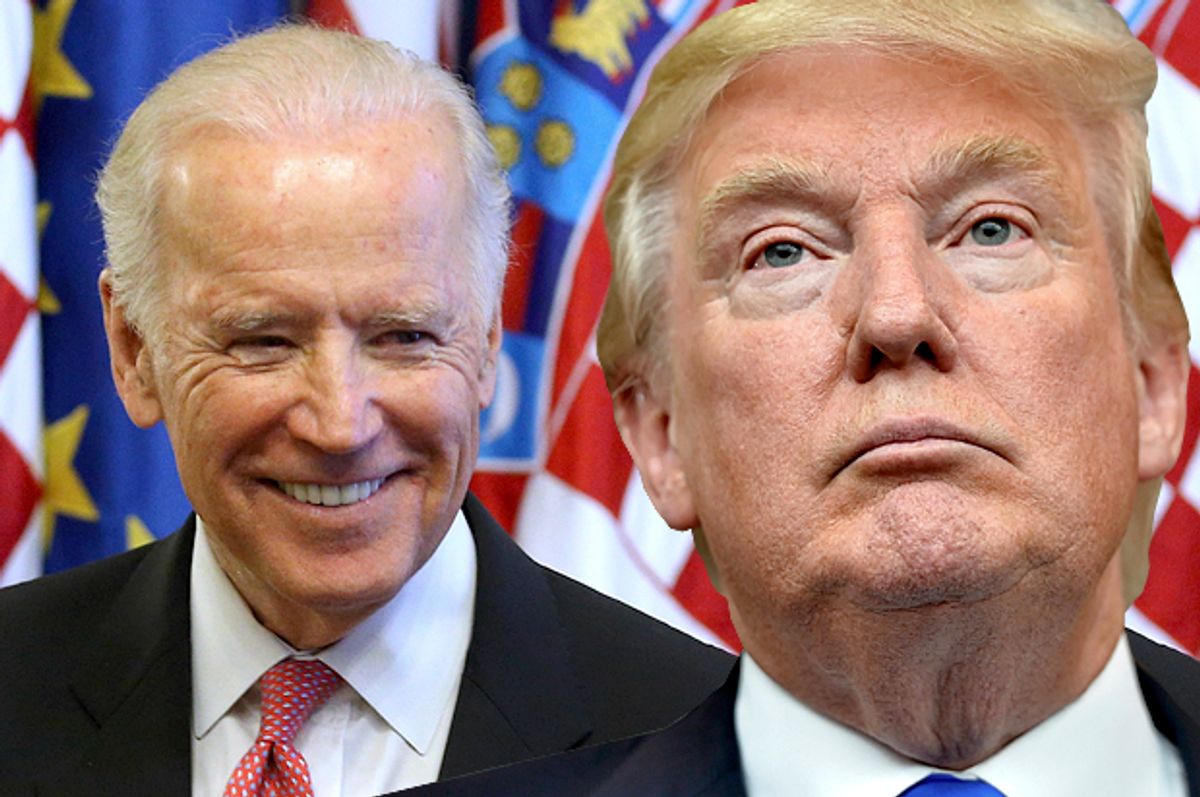 Facebook
Twitter
Reddit
Email
Since Joe Biden's announcement back in October that he wouldn't seek the Democratic presidential nomination, speculating what the primary race might have looked like with him involved has proven irresistible for voters and pundits alike. Biden himself seems to be playing the "What if?" game as well, telling NBC Connecticut yesterday that he regrets his decision not to run "every day." Let's take a look at how the race might have shaped up differently with a Biden candidacy and how he would have measured up against Donald Trump and the GOP field:
1. The Democratic debates might have been watched
Bernie Sanders has cried foul over the scheduling of the Democratic debates, claiming that Saturday night debates were intended to drive down viewership and shield Hillary Clinton from the insurgent Sanders campaign. Whether or not there is a conspiracy afoot, television ratings for the Democratic debates have paled in comparison to those of the Trump-driven GOP contests. Biden, a party insider, might have had the clout within the Democratic National Committee to lobby for a more TV-friendly debate schedule, which likely would have been bad for Clinton but good for Biden and Sanders.
2. Biden doesn't mind getting politically incorrect
To the delight of Republican primary voters, Donald Trump has made a spectacle of zealously transgressing the norms of political correctness, but Biden has his own history of eyebrow-raisers. From hot-mics catching f-bombs to ill-advised jokes about Irish lubrication and his habit of being a bit too handsy, the months-long slog of a presidential campaign would have virtually guaranteed a few news cycles being hijacked by "Diamond Joe."
3. Biden has come out strong against Trump's xenophobic statements
Though Hillary Clinton and Bernie Sanders have had strong words of their own for the worst of Donald Trump's divisive rhetoric, but even from the sidelines, Biden has shown an eagerness to condemn Trump's stances on immigration. Back in September, Biden decried Trump's "sick message" on immigration and said the Republican frontrunner had "absolutely denigrated an entire group of people, appealing to the baser side of human nature." More recently, he called Trump's call for a temporary ban on Muslims entering the country a "very, very dangerous brew for America."
4. Like Trump, Biden isn't afraid to go off the cuff
From the perspective of pure entertainment, Joe Biden vs. Donald Trump would have made for a riveting general election. While Hillary Clinton has long struggled to shake labels of "scripted" and "inauthentic," Joe Biden has had the opposite problem — his willingness to go off-script has run him into trouble over the years, but he tends to say what he means and not hold back. Debates between the freewheeling Biden and the fiery Trump would have been must-watch television.
5. Voters wouldn't have to suffer through more months of Benghazi/Email talk
It's 2016, and the conversations around Hillary Clinton's State Department emails and handling of the Benghazi affair show no signs of going away. "13 Hours," a dramatization of the Benghazi incident from Michael Bay, is scheduled for release on Jan. 15 and will help to keep these topics in the headlines. A Biden candidacy in the general election would mean that these topics wouldn't be easy fodder for the GOP challenger, possibly resulting in an election narrative driven by issues rather than scandals.
6. Trump didn't want to face Biden in a general election

Joe, thanks for not running!

It's worth noting that an October poll had Biden topping Trump by a 52-38 margin in the general election. So it's no surprise that Trump said Biden "did the right thing" when he announced he wouldn't run, saying, "I wanted to run against Hillary anyway, so I'm really happy." Perhaps he saw Biden as a greater challenge in a general election?