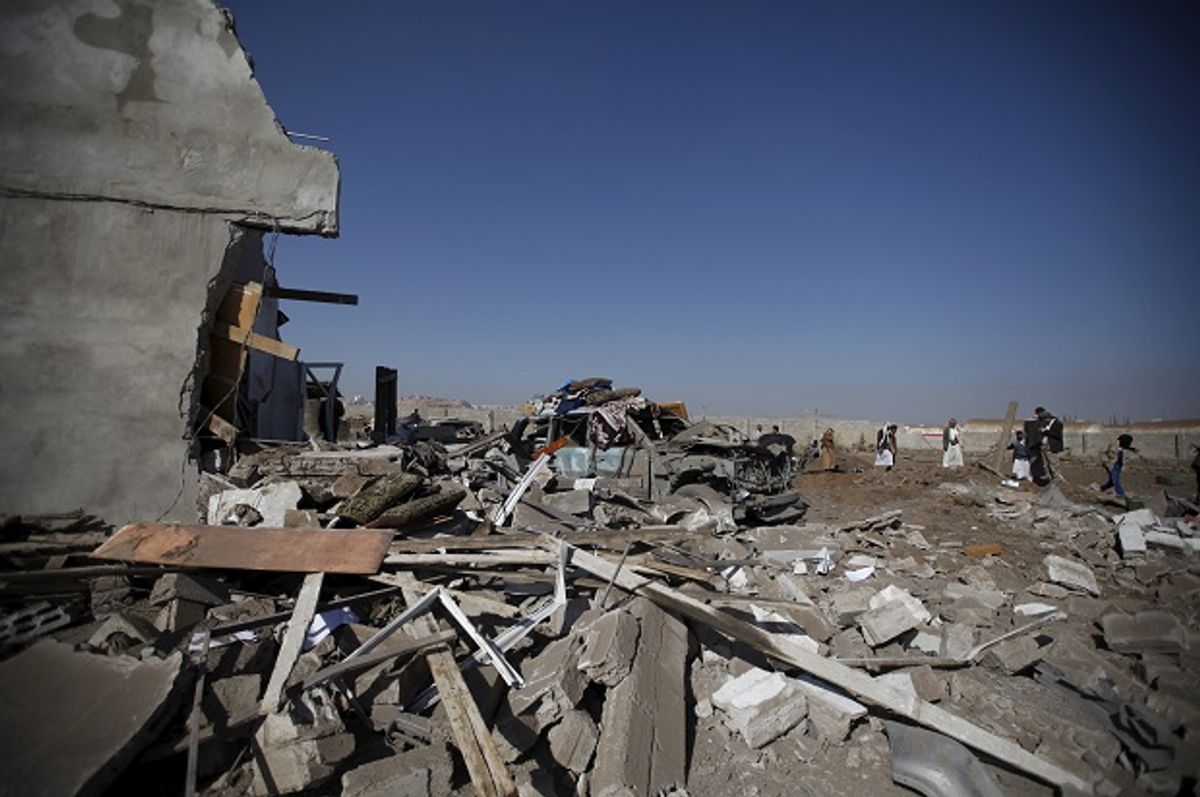 Just one day after bombing a center for the blind and Yemen's chamber of commerce, the Saudi-led coalition dropped widely banned U.S.-made cluster bombs on civilian neighborhoods in the capital Sanaa.

Rights groups forcefully condemned the attack, which they dubbed a war crime in which the U.S. is complicit.

This is not the first time the Saudi-led coalition has used cluster bombs in civilian areas in Yemen. Human Rights Watch makes it clear that the crime has been "repeated."

"The coalition's repeated use of cluster bombs in the middle of a crowded city suggests an intent to harm civilians, which is a war crime," said Stephen Goose, Human Rights Watch arms director. "These outrageous attacks show that the coalition seems less concerned than ever about sparing civilians from war’s horrors."

A total of 118 countries around the world have signed the Convention on Cluster Munitions, the 2008 international treaty that bans cluster munitions. The U.S. and Saudi Arabia, among others, have refused to sign it.

Approximately 2,800 Yemeni civilians have been killed, with 5,300 more civilians wounded, according to the U.N. The Saudi-led, Western-backed coalition is responsible for approximately two-thirds of civilian deaths, the U.N. says

Mere days before the Jan. 6 attacks on Sanaa, the U.N. said at a press briefing that it had "also received alarming information on the alleged use of cluster bombs by coalition forces."

Kenneth Roth, executive director of HRW, had previously condemned the coalition for using the indiscriminate weapons. In September, he warned Saudi Arabia is "repeatedly using indiscriminate forms of warfare."

Human Rights Watch viewed photographs of the aftermath of the cluster bombings used on Jan. 6 that show "unmistakable remnants of cluster munitions." It also identified the type and manufacturer of the bombs.

The weapons were U.S.-made BLU-63 antipersonnel/anti-materiel submunitions and components of a CBU-58 cluster bomb. They were made at the Milan Army Ammunition Plant in Tennessee in 1978.

Salon tried to contact the Milan Army Ammunition Plant multiple times for comment, but its office was not answering its phone.

Between 1970 and 1995, the U.S. sold or gave 1,000 CBU-58 bombs to Saudi Arabia. These BLU-63 and CBU-58 munitions had been developed during the U.S. war in Vietnam, in which more than 3 million Vietnamese were killed, according to a study in the British Medical Journal.

An anonymous U.S. Defense Department official admitted in August 2015 that "the U.S. is aware that Saudi Arabia has used cluster munitions in Yemen."

In the past five years, the Obama administration has done more than $100 billion in arms deals with the Saudi absolute monarchy, which funds and supports extremist groups throughout the region.

"It may have been 20 years since the U.S. last provided cluster munitions to the Saudis, but they are being used to kill civilians now,"  Goose added. "The U.S., as a party to the conflict, should be demanding that the coalition immediately stop using these weapons or risk becoming complicit in their use."