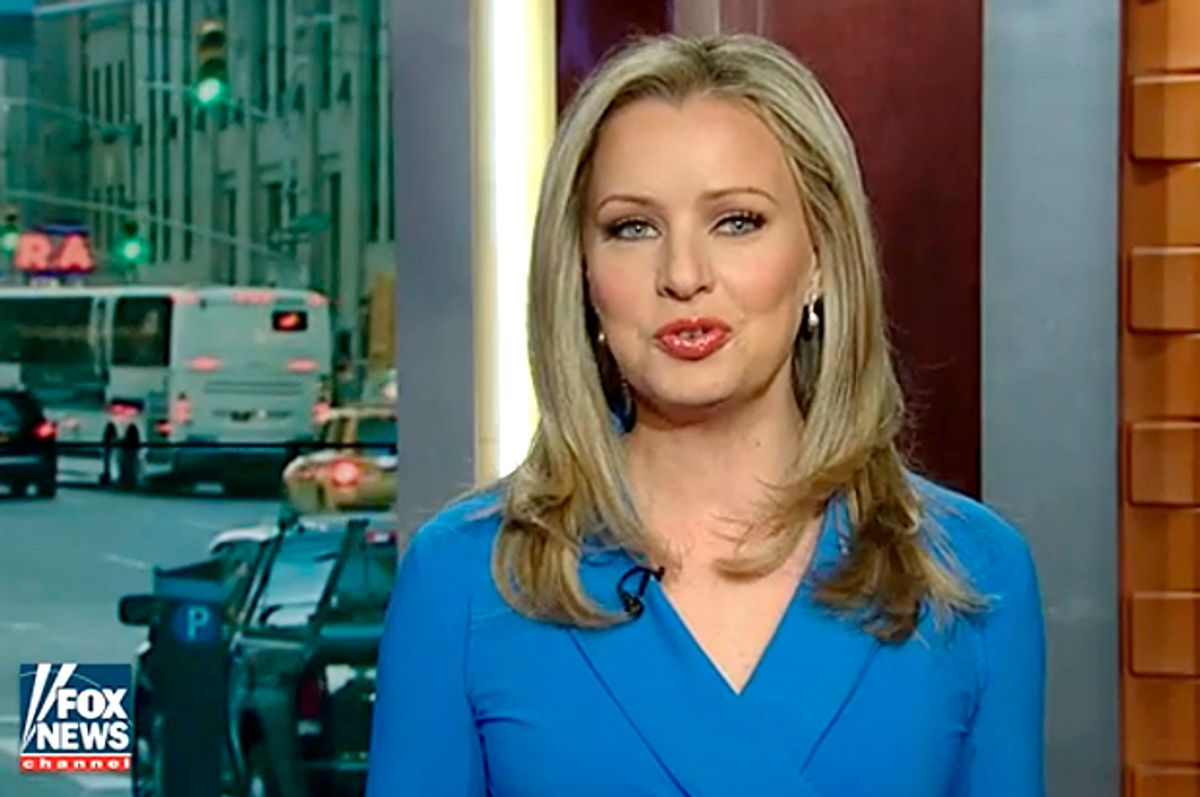 Undermining women used to be such a simple art. Getting women to sit down and shut up and feel ashamed of themselves was just a matter of telling them their place was in the home, their brains were smaller than men's and perhaps that their uteruses did something to them to make them too weak or stupid to compete with men.

But nowadays we live in the age of "girl power," where even conservatives reluctantly sign off on the idea that women are equal and deserve to pursue their career ambitions with the same vigor as men. Nowadays, woman-undermining wolves present themselves in pseudo-feminist sheep's clothing, pretending to offer helpful advice while still advancing the same line that sexists have always been telling women: It's not that the world is sexist, but that women are inferior.

Leave it to "Fox & Friends," who knows that its audience isn't the greatest at handling subtlety, to make this argument bluntly. "Ladies, do you ever feel like you're not getting the respect that you deserve around the office?" host Sandra Smith said on Thursday. "Well, it could actually just be your fault."

Ha, of course it is! The notion that sexism, i.e. an irrational belief in female inferiority, is real is but a simple hallucination generated by the notoriously hysterical female mind. The belief that women are inferior is entirely rational, and we have some bona fide ladies — you know they don't have an ulterior motive! — here to explain how. But fear not! Because the fault lies not with anyone who irrationally discredits women because they are women, but with you for sucking so much, the solution is simple: Don't suck so much, and you may trick them into thinking you're not a woman at all.

To help out, they brought on Jill Jacinto, a "millennial expert and associate director for WORKS, a career consultancy company," who is here to explain that the best way to be equal to men is to second guess everything you do and say in a way that men will never be expected to do. In this case, we are to second guess every word that we put in an email to colleagues, worrying endlessly that words like "just" and "sorry" and "I'm no expert" are "filler words" that convey a "lack of confidence." So you're supposed to carefully pick over your emails for these words, worrying endlessly about how other people see you, always sure you're doing something wrong. You know, like confident people do.

Ideally, you'd have some nagging underminer hanging over your shoulder, questioning everything you write in an email and asking if you've gained weight, while they're at it. But if you don't have a handy volunteer, there is an app for that, which "Fox & Friends" is here to tell you about. It's called "Just Not Sorry" and it's a Gmail plug-in that will comb over your emails, looking for naughty words, including "just" and "sorry", and telling you that it's your use of these words, as opposed to ingrained sexism, that causes people to treat you like some inferior female.

The sad thing is that this app has been getting a crush of attention from the media. Some of it, like this "Fox & Friends" segment, is fairly obvious in its enthusiasm for the idea that women's inequality in the workplace is due less to sexism and more because women just suck. But sadly, some more pro-feminist publications have been lulled into thinking this app can somehow empower women.

"The app that will make you a TOTAL BOSS in an instant" reads a headline at Glamour.

Co-creator of the app Tami Reiss certainly wants you to think this is about empowering women. "We had all inadvertently fallen prey to a cultural communication pattern that undermined our ideas," she said, so she helped create this app in an effort to change that.

Ugh, sounds exhausting. Wouldn't it be simpler just to change your name to a man's and hope no one notices?

It would probably be more effective, anyway. That's because, as the feminist linguist that blogs under the name Debuk points out, there's simply no evidence that women's supposed over-use of words like "sorry" or "just" are why people tend to take women less seriously. For one thing, there's no evidence that women do use these words more. The perception that they do are "just post-hoc rationalizations" for a pre-existing unwillingness to take women seriously.

It's easy to see why so many women fall for claims that you can manipulate people into taking you more seriously by eliminating the word "sorry" from you vocabulary. It's tempting to believe you can wow that sexist boss into taking you more seriously with a few adjustments to self-presentation, but the sad fact of the matter is other people's sexism is outside of your control.

This is especially obvious when it comes to the issue of women and language. Because, the fact of the matter is there is no "right" way for women to talk or write that will prevent other people from using it as an excuse to argue she should be silent instead. If you use "soft" language, you are called weak, for sure. But use "strong" language, and you will be called a bitch. The game is rigged.

Look no further than what happens to Hillary Clinton. If she tries to put on a softer, more maternal image, her ability to lead gets questioned. If she dons her pant suits and gets more aggressive, she is treated like a castrator on the right and decried by easily threatened men on the left as no different than a Republican. It's a real heads-they-win, tails-you-lose situation.

What makes this all the more transparent and comical is that, if you remove gender from the equation, the advice falls firmly on the side of everyone, regardless of gender, being mindful to use "soft" language in email. Research shows that people tend to read email as more negative in tone than it's intended, in part because there's no vocal inflection or body language to "soften" our words. Under the circumstances, the smart move would be to correct for this by making your emails gentler, more enthusiastic, and with more qualifiers, so you come across in email the way you do in person.

Email communication leans towards the "logical and rational, but emotionally brittle," Clay Shirky explains. If you doubt it, consider this thought experiment: You send an email (or text message) to a new friend or person you're dating, asking if they want to go out this weekend. Which reply is preferable: "Okay." Or would you prefer, "That sounds great. Let's do it!"

Search inside your heart and you will know why, for instance, exclamation points have become so ubiquitous in digital communications. Email flattens out tone, so we have to compensate by being extra agreeable and extra emotional. If women are ahead of men on this front — and that's a big if — then they should be congratulated for it, not scolded.