"There's a dude under a tarp, sitting in a rocking chair, holding a rifle": Seth Meyers on the weirdest part of the Oregon standoff

Also, a helpful explainer for Rick Santorum that the Bundy brigade is nothing like Occupy Wall Street 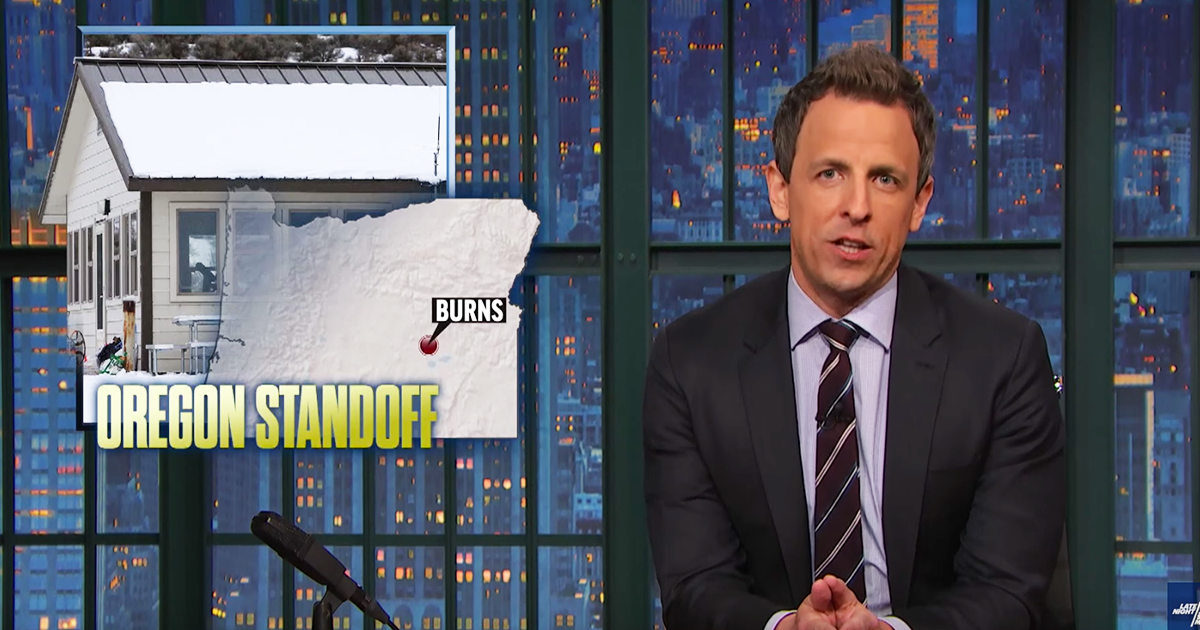 If you're having trouble understanding or explaining why the Oregon standoff is so messed up, Seth Meyers created the perfect primer on Wednesday night's "Late Night" segment "A Closer Look."

The whole issue comes down to Ammon Bundy, the son of deadbeat-tax-dodger Cliven Bundy, who argues that western states have no business owning so much federal land. The Internet exploded this week at a fake tweet that was sent out pretending to be Bundy comparing himself to Rosa Parks. Meyers said that it was a good thing the account turned out to be fake because "the only way you could compare what Rosa Parks did to using guns to take over federal property is to confuse the bus Rosa Parks was on with the bus from the movie Speed."

But the weirdest moment in this standoff happened on Tuesday during a segment on MSNBC where a reporter did his stand-up with a man with a rifle sitting in a rocking chair under a giant blue tarp behind him. "That's right," Meyers began. "There's a dude under a tarp, sitting in a rocking chair, holding a rifle. That sounds like a guess in a game of Militia Clue." LaVoy Finicum, the man under the tarp said that he had a warrant out for his arrest and he didn't plan to go peacefully. At one point, he bizarrely threw off the tarp, likely, Meyers said, because Cletus forgot to cut some air holes.

Bundy has had some issues with the standoff because it seems that the organizing was a little half-assed. He claims he tried to recruit people from Oregon but they seemed uninterested in his cause, so he's had to call in activists from other states. They even made an appeal to other militiamen to come join them letting folks know that there is adequate parking should they arrive.

Check out the rest of Meyers' take, including a dismantling of Rick Santorum's argument that the militia is just like Occupy Wall Street: