Consumer advocates warn the corporation's lawsuit is a dark sign of things to come, and the TPP will make it worse 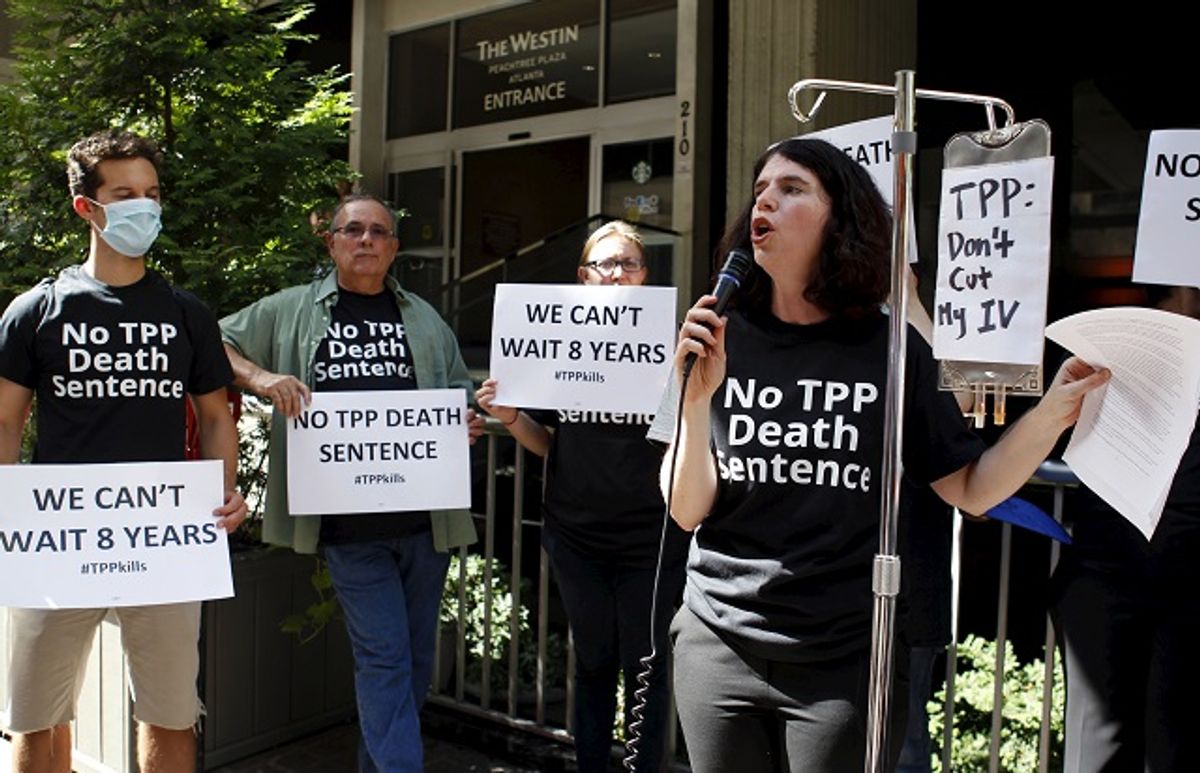 A protest outside the Trans-Pacific Partnership ministerial meetings in Atlanta, Georgia in September (Reuters)
--

Consumer advocacy and environmental organizations warn this is the path the world is taking.

Canadian fossil fuel corporation TransCanada announced this week it is suing the U.S. government, after the Obama administration rejected its proposed Keystone XL Pipeline on environmental grounds. The company claims the president exceeded the powers allotted to him in the Constitution, and, filing legal action under NAFTA, is demanding $15 billion in compensation.

Experts warned the Keystone Pipeline, which would have transported more than 800,000 barrels of crude oil to U.S. refineries per day, would accelerate climate change and almost inevitably lead to environmental disaster. Former NASA environmental scientist and now Columbia University professor James Hansen famously said that, if the pipeline were built and the vast oil reserves in Alberta, Canada's tar sands were used, it would mean "game over for the climate."

Consumer advocates have described the lawsuit as an "attack on our domestic, democratic government." Environmental groups have characterized it as disastrous news for the climate.

"What it boils down to is a foreign corporation deciding that the U.S. taxpayers ought to give them $15 billion because they don't like the outcome of our government decision that this pipeline was bad for our country and bad for the environment," explained Lori Wallach, the director of Public Citizen's Global Trade Watch.

Environmental groups said "I told you so" in response to the filing of the lawsuit. Friends of the Earth remarked, "This is why Friends of the Earth opposes the Trans-Pacific Partnership and other trade agreements, which allow companies and investors to challenge sovereign government decisions to protect public health and the environment."

Under the proposed Trans-Pacific Partnership, experts warn suits like this will be more common. The TPP, which is modeled in many ways on NAFTA and has been described as "NAFTA on steroids," is a neoliberal free trade agreement that was, throughout a period of years, deliberated in secret between a dozen Pacific Rim nations, including the U.S., Canada, Japan, Mexico, Australia and more, representing up to 40 percent of the global economy.

Labor unions have bitterly condemned the TPP and pilloried the Obama administration for pushing it through. Environmental groups have alerted that, although the agreement is more than 6,000 pages long, it does not mention climate change once. And economic justice organizations warn that TransCanada's new lawsuit is a dark sign of things to come in a TPP-era world.

"The Trans-Pacific Partnership, overnight, if implemented, would double our liability," Wallach said, detailing the chilling implications of the lawsuit in an interview on Democracy Now. "Right now, 50 agreements, about 9,000 companies are cross-registered from one of those countries that we have the agreement with operating in the U.S. to attack our laws in these tribunals. Overnight, the TPP would give 9,500 more companies — big multinationals from Japan, in banking, in manufacturing, mining firms from Australia — the right to do this," she added.

This case is "the canary in the coal mine letting us know what we'd be getting into" if the TPP is passed, Wallach warned.

In order to try to get this $15 billion in compensation, TransCanada will be going not to a U.S. court, but rather to an extrajudicial forum, the investor-state tribunal established by NAFTA. This is essentially a separate corporate pseudo-court that allows foreign companies to bypass the U.S.'s justice system -- and circumvent democracy in the process.

Wallach detailed how corrupt these corporate tribunals are. "This investor-state system, it's not judges. There are no conflict-of-interest or impartiality rules," she revealed. "These are folks who rotate between one day suing a government for a corporation and the next day being the judge. And they all hear cases amongst themselves. They call themselves 'the club.'"

"There's no outside appeal, and there's no limit on how much money they can order a government to pay," Wallach added."

That is to say, if the foreign company wins the case in these secretive, anti-democratic extrajudicial corporate courts, it can forcibly take money or other properties from democratic governments in return.

Moreover, the TPP will make all of this even worse, by expanding extrajudicial investor-state tribunals.

In his staunch support for the TPP, Obama warned things like this could not happen, claiming the international trade agreement would protect workers' rights and the environment. The Global Trade Watch director blasted Obama for his claims. "This case is exactly the kind of case President Obama said folks were making things up when they were worried about this," Wallach said. "Well, now it's happened."

Advocates have furthermore argued TransCanada is radically overcharging the U.S. government in the suit. The Keystone Pipeline was only estimated at $3 billion, but the company is asking for $15 billion from taxpayers.

With NAFTA and the TPP, however, Wallach continued, "under the outrageous investor-state system, not only can a foreign corporation get all these special rights — go around our courts, go around our laws and demand compensation — but they don't just get money for what they've spent on a project, they get to get compensated for expected future profits."

The fossil fuel corporation is calculating "what they think they would have made in the future for the lifetime of the pipeline had it been allowed. And that's what we taxpayers are supposed to give them, because we had a democratic decision of our government that their commercial project wasn't in the national interest. That’s the $15 billion," Wallach explained.

This lawsuit comes on the heels of a similar controversy, in which the World Trade Organization "gutted another consumer law," Wallach noted. The WTO threatened to impose billions of dollars worth of trade sanctions on the U.S. government for putting mandatory country-of-origin labels on meat in grocery stores -- a practice that was hard-earned after years of work from consumer rights activists.

In early January, Congress voted to repeal meat-labeling laws, in what was widely seen as a major victory for food corporations.

These are "two examples, live and real, compared to what President Obama promised," Wallach stressed.

The TPP will result in "handcuffing governments with their policy options," she added.

This is an "attack by TransCanada on our domestic, democratic government decision not to have a pipeline," Wallach said, and will have profound impacts on our future.

In short, TransCanada's lawsuit is the first example of how the TPP will put corporations' rights over the right of democratic governments to act in order to protect citizens and prevent climate catastrophe, which threatens all life on the planet.