Bill, Hillary and the women: Should millennials care about Bill Clinton's sex scandals?

Bill Clinton is campaigning for Hillary, and they're banking on young voters dismissing old allegations of abuse 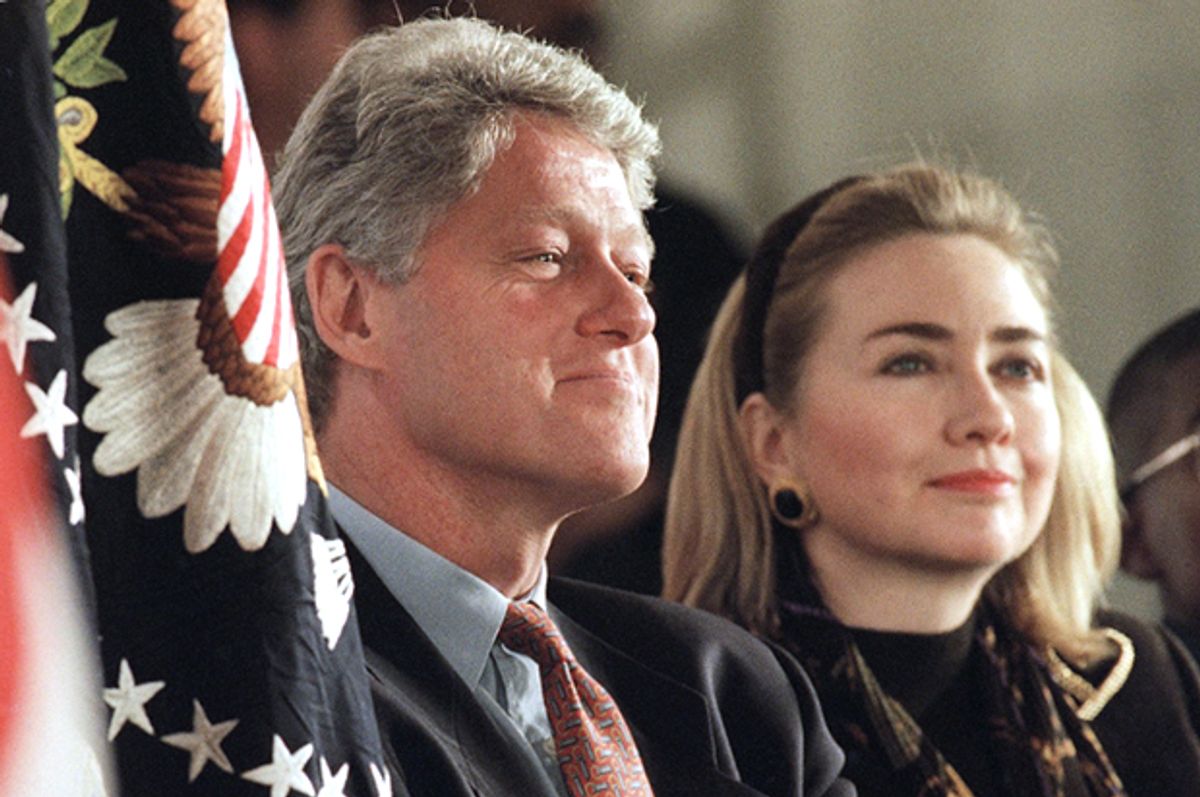 After Donald Trump took a jab at Hillary Clinton last week over Bill Clinton’s “terrible record of women abuse,” Bill Clinton’s past behavior toward women has once again been thrust into the limelight. But Slate’s Jamelle Bouie argues it’s unlikely to do significant damage to Hillary Clinton's candidacy because of the demographics of the electorate, in particular the 31 percent of it composed by 18- to 35-year-olds. “Will this group care about Bill Clinton's infidelity? Anything is possible. But odds are they won't...for the simple reason that they're too young for it to matter to their political identity,” he writes.

Bouie goes on to draw two overarching conclusions, neither of which I dispute. The first is that both Hillary Clinton and Jeb Bush can redefine themselves for a voting public who have not yet formed concrete pictures of them. The second, more problematic, is that modern political campaigns have become an exercise in mobilizing supporters, rather than persuading dissenters.

In the interest of bucking this trend, it's worth asking not whether millennials do care about Bill Clinton's past, and to ask instead whether we ought to. The exercise is all the more important if even politically engaged millennials don't know much, or haven't thought that deeply, about the former president's troubling history.

For those millennials, including myself, who lie squarely in the middle of the 18-35 age range, Bill Clinton's impeachment and subsequent acquittal occurred at a time when we absorbed our political worldviews from the adults around us: parents and teachers. Those adults, hesitant to offer more than minimal details about the events that had sparked the proceedings, were generally happy to write Monica Lewinsky off as a one-dimensional character, regardless of their own political leanings.

At the time, our culture lacked a complete awareness of the issues at play when powerful men enter into affairs with young female subordinates. And we were too young to challenge this narrative, not that we necessarily wanted to. For our parts, 22 seemed old. Adult enough to understand right from wrong, adult enough to know that sleeping with a married man was quite obviously wrong, and adult enough to be held accountable when one knowingly transgressed.

In Lewinsky's case, accountability meant having her identity, in our generation's eyes, forever reduced to that transgression. (Sang Queen B herself in 2013, describing a risque limousine encounter, “He Monica Lewinsky-ed all on my gown.”) It wasn't until a New York Times profile of Lewinsky in early 2015 that I lent much consideration to the matter. In it, Lewinsky was quoted as calling that period of our childhoods as “a time when she [Lewinsky's mother] sat by my bed every night...a time when she made me shower with the bathroom door open...a time both my parents feared that I would be humiliated to death.”

These musings, of course, were largely shaped by the fact that I live in a very different culture than my parents and teachers did. In my own millennial view, one shared by many of my peers, inappropriate professional conduct goes far beyond strict legal definitions of quid pro quo sexual harassment. Extending Bill Clinton every benefit of every doubt, we can still state conclusively that he has grossly exploited power dynamics for sexual favors.

Extending him fewer benefits, one could potentially state much more. In a 1994 complaint, a former Arkansas state employee named Paula Jones sued Bill Clinton for sexual harassment. Jones claimed that, while working at a government-sponsored conference, a state trooper summoned and escorted her to the then governor's room. There, she claimed that he took special care to note that the director of Jones' agency (a Clinton appointee) was a “good friend,” before attempting to kiss her. Jones claims that even after she physically recoiled and shouted, “What are you doing?” Clinton exposed himself to her. According to Jones, she rejected his advances and left the hotel room, but found the incident disturbing and feared professional reprisal. Bill Clinton denied the allegations.

In another, far more chilling, case made public after Clinton's acquittal, a nursing home administrator named Juanita Broaddrick alleged that Clinton raped her. According to Broaddrick, after meeting Clinton at a gubernatorial campaign visit in 1978, she expressed interest in volunteering for the campaign. Broaddrick claims that, while attending a business conference in a hotel, Clinton suggested the two chat over coffee in her room to avoid some reporters. There, she claims that Clinton held her down, bit her lip, and forced himself upon her despite physical and verbal protest. Three weeks later, at a small Clinton fundraiser, Broaddrick claims that Hillary Clinton approached her to express appreciation for “everything you do,” which Broaddrick interpreted as a reference to her silence about the assault.

Hillary Clinton, for her part, has made her stance on sexual assault a part of her campaign, tweeting a link to her policy proposals along with the claim that “Every survivor of sexual assault deserves to be heard, believed, and supported.” When asked at a campaign stop whether she thought the sentiment applied to Jones and Broaddrick, Clinton responded, “Well, I would say that everyone should be believed at first until they are disbelieved based on evidence."

Today, we also have a better understanding of the pressures felt by victims of assault, and how they might manifest themselves in a way that calls their credibility into question. When Broaddrick was subpoenaed during the Jones lawsuit, she denied rumors that Clinton had assaulted her, testimony that seemed to stem from a genuine desire to evade media attention. If anything, Bill Clinton's testimony during the Jones trial revealed that it was he who was willing to distort the truth to preserve his own self-interest. The fact that he perjured himself in this case, denying sexual involvement with Lewinsky, was what led to his impeachment. In any event, the “evidence,” is hardly conclusive.

Hillary Clinton's current position is difficult to square with her conduct as these matters came to light—where she spoke, if at all, in support of the alleged perpetrator instead of the alleged victims. It is even more difficult to square with her conduct since, given her continued use of Bill Clinton as a high-level spokesperson for her campaign and as a valuable conduit for enriching herself and her family. Extending Hillary Clinton every benefit of every doubt, we can state conclusively that she has gained a great deal from diminishing the seriousness of these allegations, and stands to gain a great deal more.

Yet despite Hillary Clinton's presentation of sexual assault as a campaign issue, public figures have suggested that interest in these matters is driven by frivolity or, bizarrely, feminine insecurity. In a recent interview with ABC, Bernie Sanders dismissed attacks on the Clintons, saying, “We have more things to worry about than Bill Clinton's sexual life.”

In October, prominent feminist Gloria Steinem dismissed women who don't support the Clinton campaign as “Hillary Haters,” suggesting, “the fact that Bill valued Hillary as an equal partner – and vice versa – seemed to make them more aware that their own marriages were different...if a sexual connection is the only bond between a husband and wife, an affair can make her feel replaceable...I began to understand that Hillary represented the very public, in-your-face opposite of the precarious and unequal lives that some women were living...they were trying to kill the messenger.”

I personally don't give a damn about Hillary and Bill Clinton's marital arrangement, or about Bill Clinton's “sex life.” But allegations of rape and harassment do not fall into that category. Rape is not an “affair.” Harassment is not “infidelity.” The terminology employed by political commentators and progressive icons alike suggests otherwise. This is inaccurate and irresponsible of the former group, and tremendously disappointing of the latter.

For even setting aside the specific women who have accused this specific man, the tenor of our discourse has broader social implications. To women who are afraid to confront or report cases of assault and harassment. To men who are confident they can assault or harass with impunity. What does our current discourse say? That victims would do well to stay silent. That the legacy of powerful men outweighs their trivial, petty demands to be treated with basic human dignity.

“Finally, fathers will be able to say to their daughters, 'You, too, can grow up to be president,'” Hillary Clinton triumphantly declared during the first Democratic debate, highlighting the symbolic importance of her candidacy. In her case, that narrative is undeniably fraught. Today's millennials, men and women, will one day have to answer difficult questions from our daughters about this particular moment. So often, in dismissing the misdeeds of great men past, we appeal to the “standards of the time,” forgetting that we are setting the standards of today. Not just by the votes we cast, but by the words we say and write, by the behavior we tacitly condone or openly condemn, by the people we deify and defame. What do we hope to tell our children one day?