Marco Rubio's ridiculous Bootgate: "We always have a crisis in masculinity in this country" 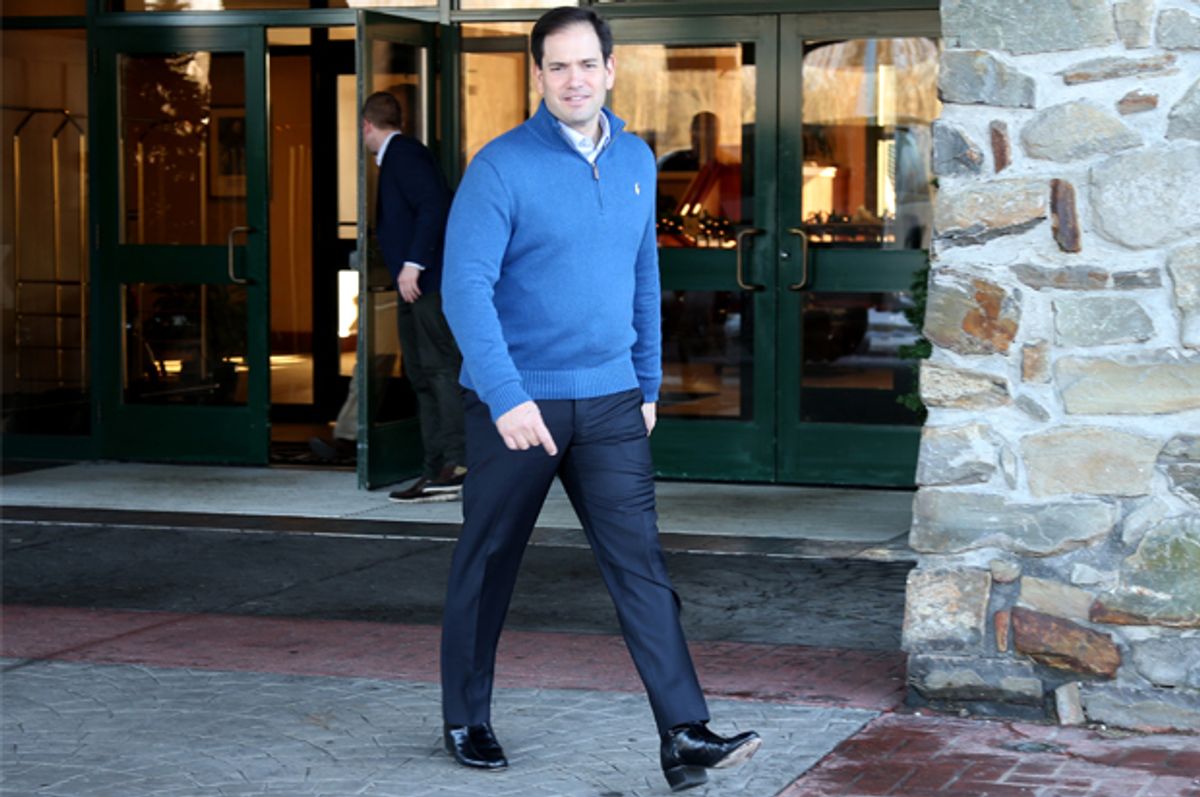 It didn’t take long for it to be dubbed “Bootgate,” after the snazzy Florsheims that Marco Rubio has begun sporting on the campaign trail. Rick Tyler of the Ted Cruz campaign has called them “Men’s High-Heeled Booties.” The implication to this and other comments is that there is something feminine (“high-heeled”) and infantile (“booties”) about the Senator’s footwear, and perhaps about Rubio himself.

“As sartorial politics go, Bootgate has eclipsed any other fashion story of the election thus far, including any fashion story related to the two female candidates, Hillary Clinton and Carly Fiorina,” the New York Times notes.

But it’s not the only place where there’s anxiety around masculinity.

Accord to Duke University historian Reeve Huston, this kind of thing is nothing new. We spoke to Hudson, who writes about American history, especially Jacksonian democracy, from his home in Durham, N.C.

Right now we’ve got an armed standoff in Oregon, mockery of Marco Rubio’s boots, and disdain over President Obama’s tears for gun deaths. Do we have a crisis in masculinity in this country right now?

We always have a crisis in masculinity in this country. We always do. Partly because the economy and politics are continually changing – the ground shifts under masculinity. Right now, it's the disappearance of steady jobs and man as the sole breadwinner.

We also have a credible female candidate for president, which doesn’t happen often.

Yeah – we have a very credible female candidate.

And we have a … Do you remember the Fox News denunciations of Obama as a “metrosexual,” sensitive man… I think that’s really big. I think that’s what the Rubio thing is about. There are various ways of being men – some of which are very threatening to people who go for the old-fashioned masculinity.

Speaking of, apparently the Rubio campaign has an ad now where he’s holding a football.

Glad to hear it! He’s trying to re-establish his credentials as a man.

Masculinity has always been central to self-presentation in American politics. In the years after the Revolution, when high politics was a gentleman’s game, it was one of the cores of political success to demonstrate that you had honor. As a result, politics almost continually involved attacks on one’s honor and reputation…If they got out of hand, it became an affair of honor… There was whole ritual where the offended party asks for an explanation… and then he issues a challenge, and if things don’t get resolved beforehand, which they usually did, it led to a duel. That’s how Alexander Hamilton got killed.

Masculinity in a very raw and assertive form, I guess.

Very raw, very elite. The plebeian guys, who were starting to enter politics at the time, were not entering into affairs of honor.

In the late 1790s, Mathew Lyon, who was a Republican Congressman, maybe a senator, got into a dispute on the floor of Congress with a Federalist, and wound up spit in the guy’s eye. And the guy did what you’re supposed to do when you’re a gentleman and your honor is impugned by someone beneath you socially – you take your cane and start beating them. Matthew didn’t take it lying down – he picked up the fire tongs and fought back.

Middle class masculinity was about sticking by your word, keeping promises, showing skill, and sexual and other moral responsibility.

By the 1840s, 1850s one of the central figures in politics was the “shoulder slapper” – basically urban gang members. Part of this really hard-drinking, masculine culture called the Sporting Life… which could edge over into sexual adventuring, prostitution…

When people mock Rubio’s boots, what’s going on there? What’s the implication?

The implication is he’s not manly enough to be president. And it’s not 100 clear what that means. One of the arts of politics is ambiguity – you let people fill in the blanks. And they always fill it in in a way that makes your message most appealing to them.

One implication: Can a man who wears boots like that be trusted to stand up to the Russians?

Or maybe it’s more generalized – who knows what he’ll do if he’s not manly enough?

There was a parallel to this kind of jibe: Aaron Burr, who was in many ways not an establishment politician and viewed as suspect in part because he was a dandy.

Right – the member of a different gender tribe.

I wouldn’t be surprised if someone started using the term metrosexual.