Taking the bait: Rush, Coulter among the gullible GOPers falling for Trump's birther smear on Cruz 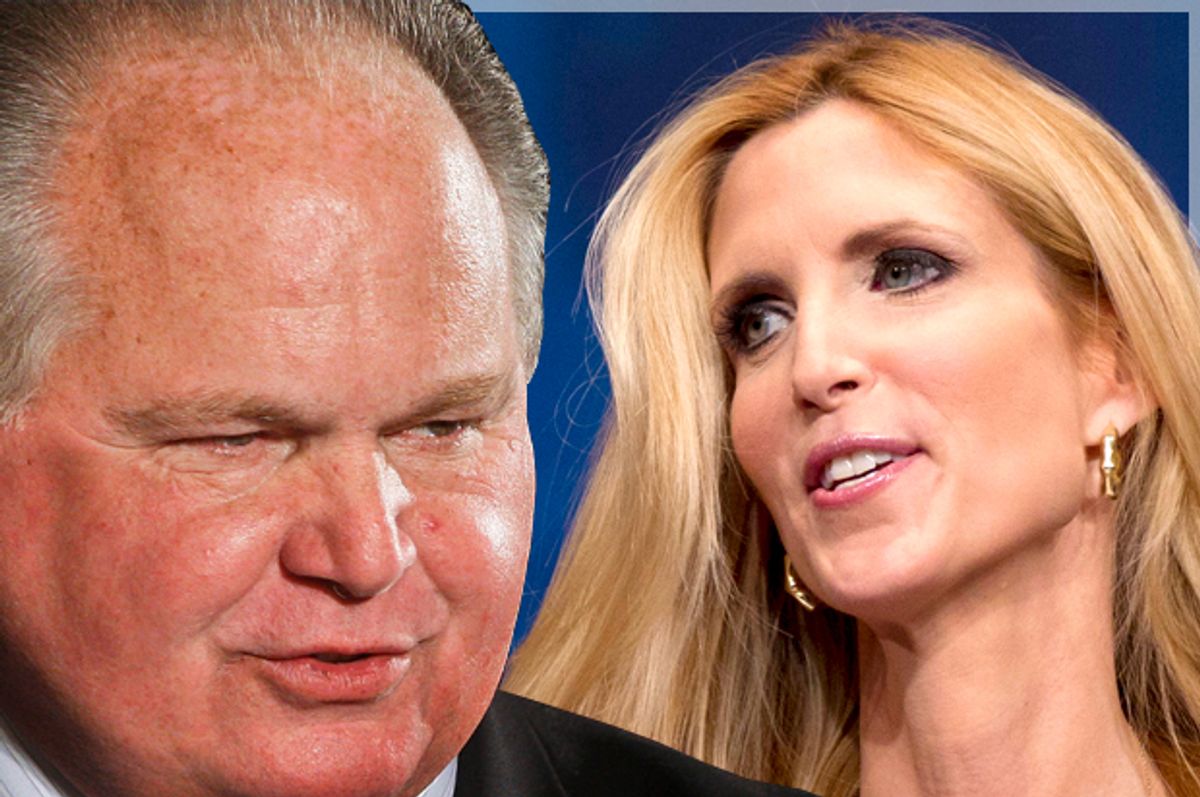 Whatever happens in the primary, Donald Trump has already made history with his ability to generate entire political crises where none existed before, simply by spouting off whatever foul idea has popped into his head.

Now the wizard has pulled off this magic trick again, by running around asking "questions" about whether his closest Republican opponent, Ted Cruz, is really eligible to be president if he's elected.

"Republicans are going to have to ask themselves the question: ‘Do we want a candidate who could be tied up in court for two years?’ That’d be a big problem," Trump told the Washington Post. "It’d be a very precarious one for Republicans because he’d be running and the courts may take a long time to make a decision. You don’t want to be running and have that kind of thing over your head."

Trump, ever the concern troll, claims that these questions are in no way to be seen as a reaction to Cruz creeping up on him in the polls as the primary draws closer. Oh no! He's running around implying that Cruz isn't really a citizen "for the good of Ted." He's demanding that Cruz go in front of a judge right now not because he wants to instill the idea that Cruz is less than fully American in the minds of Republican voters, no sir. He's just trying to help!

In a saner world, Trump's posturing on this would result in a few eye rolls before everyone moved on. This is childish behavior from a narcissistic bully, one who has a habit of using birther conspiracy theories to imply that only white people are eligible to hold office. This would be offensive if it weren't so pathetic or if Cruz was anything but a bag of sentient fungi who learned to mimic human behavior by studying faith healing preachers on the TV.

Alas, we do not live in a sane world, so instead, Trump's gambit has been effective at creating a "conversation" about this non-issue, allowing all sorts of people to float "questions" about whether Cruz is eligible to be president. (He is. Now whether he's qualified is a different question.)

Rand Paul, apparently still suffering under the delusion that he's got a shot at the nomination, jumped aboard the "just asking questions" (or "JAQ-ing off," as the kids like to say) train. "I'm not an expert on the natural-born clause in the Constitution and people have various opinions," Paul said on Wednesday, after "joking" that Cruz could be the "prime minister of Canada."

After demurring on the actual question at hand, he floated the same concern troll argument that Trump is making: "We live in a really litigious world and it is a concern that people will sue him over not being born in this country."

Whatever else you want to say about Trump, there is a mad genius in his trolling abilities. Coming right out and questioning Cruz's citizenship is a tough line to pull off. Pretending that you're not worried for yourself but that other people might make it an issue, however? That's a good cover story.

No wonder it isn't just Rand Paul who's picking it up, but Rush Limbaugh, who added even more cover to the story by shifting the blame to Hillary Clinton. "And if Cruz is the nominee, you can make book on the fact that Trump is right about one thing, that Hillary's gonna raise it," Limbaugh warned. "So I wouldn't doubt that Trump's right, that the Democrats might bring up Cruz's citizenship aspect, maybe even challenge it in court, because they've done it before."

Conservatives might not be the most rigid of logicians, but one has to admit they are good at creating funhouse mirror rationales for their nonsense arguments. If you want to cast doubts on Cruz's citizenship in the minds of voters without taking responsibility for your words, just attribute them to some future version of Hillary Clinton that exists only in your head. That's the ticket!

The blame-the-Democrats strategy got more juice when Josh Earnest joked during a White House press briefing, "I think it would be quite ironic if after seven or eight years of drama over the president's birth certificate, if Republican primary voters were to choose Sen. Cruz as their nominee, somebody who actually wasn't born in the United States and only 18 months ago renounced his Canadian citizenship."

Conservative bloggers at Hot Air and Breitbart got all huffy about this, but it's worth remembering that Earnest didn't actually bring this up. He was asked about this non-controversy by a reporter, and his answer ignored the non-issue of Cruz's eligibility (which really is not in question) and just addressed the emotional pleasure liberals get out of watching Republican conspiracy theories blow up in their faces. If Trump hadn't decided to make this a controversy, it wouldn't be.

Of course, there are some, like Ann Coulter, who have blown right past the "just asking questions" phase and into straight up denials of Cruz's eligibility.

NYT: Cruz was born outside the U.S. to 1 American parent: "Under the Constitution this makes him a 'natural born citizen.'” Absolutely false

Less of a mystery is why Coulter so dramatically shifted her position on this one from the one she held in 2013.

TED CRUZ CAN RUN FOR PRESIDENT! I worried on @seanhannity @ his Calgary birth, But his mother was a US citizen, so he was born a citizen.

Back then, she wasn't a full-blown Trump fanatic, like she is now. And so now she is willing to sign off on any logical stretch — even going so far as to argue herself into saying no one is really a natural born citizen — to disqualify any challenge to her beloved Trump.

But Coulter is, of course, a clown honking her nose and probably not appealing to anyone who wasn't already voting for Trump.

The larger issue here is not whether Cruz is eligible (he is). What is frustrating here is that Trump's gambit is working. His ability to take a settled question and turn it back into a "controversy" simply by flapping his gums, whether it's the right of Muslims to immigrate here or the issue of Bill Clinton's sex life or Ted Cruz's citizenship, seems to hold no bounds. At this point, if Trump started questioning whether puppies are real, we'd have to have a week-long media inquiry into the question.