The GOP's anti-crying crusade is so deeply embarrassing it hurts 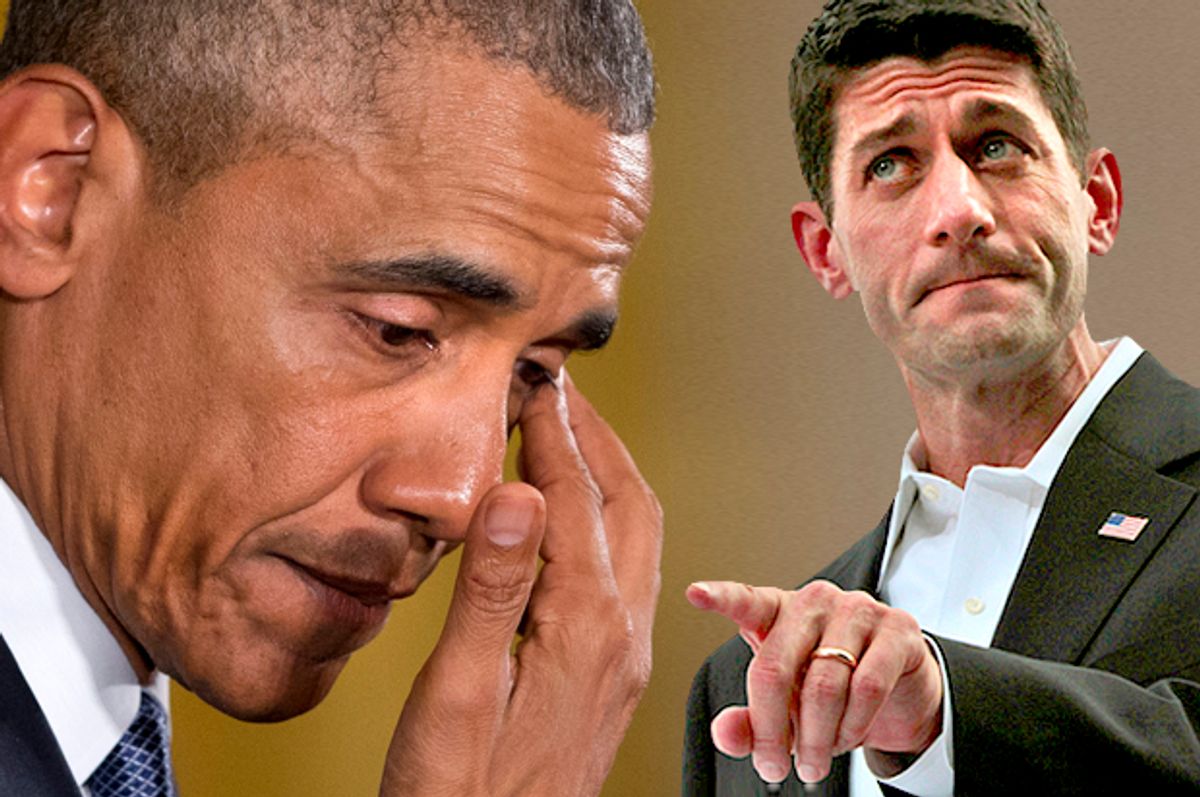 Three years into his second term, it's not difficult to draw the conclusion that President Obama might be the most scrutinized chief executive in modern history.

There's inherently nothing wrong with scrutinizing our political leaders, of course, but what distinguishes Obama's most vocal critics is the basic unfairness and, in many cases, the unhinged madness of the scrutiny. It goes well beyond disagreements over policy and extends into minuscule nitpickery, too often escalating into bug-eyed anti-Obama garment rending, especially online.

The latest example is the criticism of Obama's apparently genuine display of emotion while discussing the 20 first-graders who were gunned down in cold blood at Sandy Hook in December 2012. Speaker Paul Ryan responded to the moment by accusing Obama of not shedding tears over the atrocities committed by ISIS. (We'll circle back to this.)

The derangement over Obama began with the birthers. As early as 2007, critics and conspiracy theorists began circulating the ridiculous idea that Obama wasn't born in the United States and subsequently falsified his birth certificate in order to qualify as a natural born citizen. It might be the most easily debunked conspiracy theory in recent memory, given how Hawaii government officials and newspaper records confirmed that Obama was born in Honolulu. Along those lines, a full third of Americans still believe Obama is a Muslim rather than an occasionally practicing Christian, the latter of which being the truth, obviously.

And now, eight short years after the birther movement began, the second place candidate in the GOP presidential nomination process, Ted Cruz, is facing accusations from Donald Trump and others that he wasn't born in the United States and is therefore ineligible for the presidency. The massive difference between Obama and Cruz is the reality that Cruz was definitely born in Canada, while Obama was definitely born in Hawaii. That doesn't mean Cruz isn't eligible to be president. He is. But the point under dispute here is at least concerned with some measure of legal interpretation, and not, as in the case of Obama, based on exhaustively debunked falsehoods.

Put another way: The black politician born in the U.S. isn't really a natural born citizen and is therefore ineligible for the presidency, but the conservative candidate who was obviously and admittedly born in another country is undoubtedly eligible to be president.

Funny how that works. It's OK... if you're a Republican. This applies to birthplaces, sure, but also to mundane contrivances like Teleprompters, tan suits, the use of Air Force One, policy "czars" in the White House, executive orders and so forth.

Evidently, if a single tear gurgles up in Obama's eye during an emotional speech in which he's elaborating on the unspeakably brutal deaths of 20 6-year-olds, it's practically an impeachment-worthy trespass. It doesn't seem to matter, on the other hand, if the former Republican speaker of the House and the second in the line of presidential succession, John Boehner, routinely melted into what appeared to be wine-soaked, almost breathless public sobbing, far beyond the president's comparatively restrained waterworks.

Frankly, given the circumstances, the president should've sobbed like Boehner when talking about Sandy Hook. As president, he's endowed with constitutional powers to take limited action on gun control, and in an age when mass shootings occur more often than MSNBC lineup changes, he's obviously experiencing considerable remorse and regret that he didn't exploit his executive stature to prevent them. I think most of us would cry under those circumstances.

It's ironic, then, how the GOP is championing a reality show celebrity as its front-runner because he's just like us, while they simultaneously hector the sitting president because, for a very brief moment, he shed a tear for 20 dead children -- just like us. Honestly, I worry about anyone who wasn't choked up by the Sandy Hook tragedy, not to mention the other shootings in the ongoing roster of American gun massacres.

But, as with all the other nonsense, the president's tears represent a scandal, arguably the second most-discussed story of the week after the standoff in Oregon. The president shouldn't have cried at all, some said. Others derided the president for manufacturing fake tears for the benefit of his forthcoming gun-grab. (As much as I'd like to see a gun grab, it simply won't happen. Not now.)

So entered Paul Ryan into the fray.

The man who took over for professional bawler John Boehner as speaker of the House is supposed to be one of the "reasonable" Republicans. He's so reasonable that Ted Cruz and his fellow Tea Party extremists sincerely believe Ryan is nothing but a RINO and a pushover in the face of the Democratic minority. And yet Ryan joined the screeching about Obama's crying anyway.

The speaker continued, "What I think he’s trying to do is distract from basically his failed policies." This part might be ranked as "half true," given how Obama has admitted to not doing enough on guns in spite of all the massacres. It was kind of the point of his speech. He failed to do enough. In fact, last year Obama defined the mass shootings as consequences of political failures, including his own. That said, there's no distraction here. His contrition was visible for everyone to see.

"I think the president should put as much effort into going after homegrown jihadists and going after terrorist infiltration of our refugee network and going after defeating ISIS as he is in trying to frustrate the law-abiding citizens’ Second Amendment rights."

Yeah, how dare Obama shed a tear for the Sandy Hook victims and not the victims of radical Islam. Elsewhere, Fox News Channel's Eric Bolling added that ISIS would see the president's tears as a sign of weakness. So, the speaker thinks Obama should cry over ISIS, but Bolling says ISIS would think it's weak. This is Obama Derangement Syndrome fully illustrated: Attack Obama, regardless of whether it makes any sense.