This is how Ted Cruz wins: Why the formerly unthinkable could really, actually happen 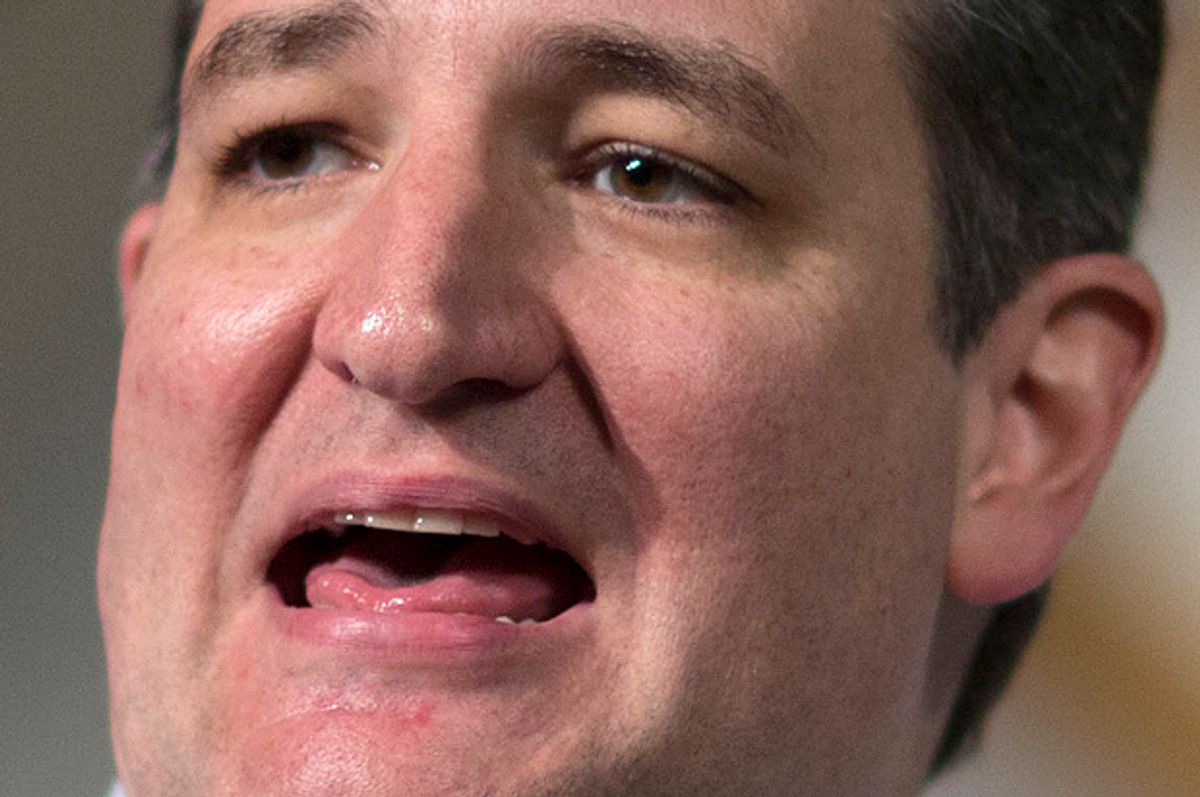 When Ted Cruz came to the Senate in 2013, after winning a squeaker of a Senate race the previous November, he didn't waste any time in bringing himself to national attention. It wasn't his style to use his freshman term to keep his head down and learn the ropes.  Just seven weeks after being sworn in, Cruz made a name for himself by accusing fellow Republican Chuck Hagel of taking money from communist North Korea during his confirmation hearings for Secretary of Defense. This accusation startled virtually everyone and earned Cruz a rebuke from committee chairman John McCain. Senator Barbara Boxer drew an apt analogy when she said she was reminded of “a different time and place, when you said, ‘I have here in my pocket a speech you made on such-and-such a date,’ and of course there was nothing in the pocket.” She was alluding, of course to the notorious Senator Joseph McCarthy.

As Jane Mayer reported in the New Yorker at the time, this was not hyperbole. She had personally heard Cruz claim that the Harvard School of Law had harbored a dozen communists on the faculty when he was a student there:

Cruz made the accusation while speaking to a rapt ballroom audience during a luncheon at a conference called “Defending the American Dream,” sponsored by Americans for Prosperity, a non-profit political organization founded and funded in part by the billionaire industrialist brothers Charles and David Koch. Cruz greeted the audience jovially, but soon launched an impassioned attack on President Obama, whom he described as “the most radical” President “ever to occupy the Oval Office.” (I was covering the conference and kept the notes.)

He then went on to assert that Obama, who attended Harvard Law School four years ahead of him, “would have made a perfect president of Harvard Law School.” The reason, said Cruz, was that, “There were fewer declared Republicans in the faculty when we were there than Communists! There was one Republican. But there were twelve who would say they were Marxists who believed in the Communists overthrowing the United States government.”

Within seven weeks of becoming Senator, Cruz was a national figure who was being compared to one of the most reviled figures in American politics. He was often compared to McCarthy from that point forward, even including the likes of conservative David Brooks, who found him to be quite a distasteful character:

It’s like the most un-conservative act to come in two weeks into the job and decide the Senate exists for you to take it over. So I think he’s made a lot of enemies. It doesn’t help that he has a face that looks a little like Joe McCarthy, actually. So, you know, I find him a little off-putting.

The more establishment figures like McCain and Brooks loathed him, the more the right wing of the party loved him. He became a backroom advisor to the "Freedom Caucus" in the House and he led the charge to shut down the government in 2013. Many on the right attribute their victory in 2014 to his strategic leadership.

When he threw his hat in the ring for president, the conventional wisdom was that he was a fringe player along the lines of Michele Bachmann in 2012 and was assumed to be so unpopular within the party that he couldn't possibly raise any money. And even if he could  overcome those obstacles he had such a repellant personality that nobody in their right mind would vote for him for president. He was, after all, the reincarnation of Joseph McCarthy, a man whose name is synonymous with political paranoia.

That doesn't seem to be happening. In fact, Cruz has shown himself to be a disciplined campaigner and a strategic thinker, managing the rough and tumble of this weird GOP primary campaign better than any of his rivals. He's fended off attacks with aplomb and doesn't seem to have been hurt by them. And as Dave Weigel reported yesterday in the Washington Post, he has not trimmed his ideological sails in the least:

One questioner asked about the alleged influence of the Trilateral Commission and David Rockefeller, two bugbears of conspiracy theorists. "It's a very good question," said Cruz, pivoting to discuss the Medellin national sovereignty case, which is featured in some of his TV ads here. Another questioner asked whether the Federal Reserve was constitutional, prompting a short monologue by Cruz about why America should return to the gold standard.

And another questioner asked about the potential threat of Muslim courts issuing their own sharia-based rulings within the United States.

"Under no circumstances should sharia law be enforced anywhere in this country," Cruz said. "We should do whatever it takes to prevent that."

It doesn't get any more hardcore than that.

But Cruz has done something else that hasn't been noticed by most of the press corps. He's lost that Joe McCarthy countenance, and many of his harsh edges have softened. He's given one on one interviews in which he told personal stories that humanized him. He's lightheartedly sparred with Trump and others on social media batting back criticisms with clever bon mots instead of engaging in combat. The Christmas ad that caused such a ruckus when a Washington Post cartoonist portrayed his daughters as monkeys only served to introduce the two darling moppets to many more people than would otherwise have seen them. And rather than get down and dirty with Trump, as the man is obviously baiting him to do, he has maintained a rather stately mein, insisting that he is in the race to speak about serious issues. The contrast with Donald Trump's crude brashness has had the effect of making the awkward Cruz seem almost moderate in affect if not ideology.

Meanwhile, polls continue to show a race with Trump at the top, then Cruz coming on strong in second and a cluster of so-called establishment candidates -- one of whom everyone still expects to emerge as the "candidate to beat." And perhaps that will happen as they predicted all along. After all, nobody has voted yet. But that is a unique way to analyze a race in January of an election year. If anyone but Cruz and Trump were in the number one and two position it would be assumed that they were the legitimate leaders and the race would be framed as a race between the two of them with some outside chance of a dark horse making a late move. But because they are both, in different ways, extremists, it's assumed they both represent a minority faction and the "mainstream" Republicans will emerge as the majority. But there's every reason to believe that in 2016 these two may actually represent most GOP voters while the Washington establishment types are the fringe.

Early indications are that some DC insiders are still living in hope that one of the establishment types will break through but, still also harbor so much animosity toward Cruz that they'll take the risk of Trump rather than accept him as their leader. But they are in the minority. Jeb Bush, for instance, refused to say that he would vote for Trump if he were to get the nomination.

More interestingly, it looks as though some of the mainstream conservative pundits are starting to make peace with the idea that Cruz may end up as the establishment candidate by default. Rich Lowry made this case in Politico by calling into question the conventional wisdom that Cruz is another Goldwater extremist who will necessarily go down in a massive general election defeat. And instead of finding parallels to his aggressive ambition in the repellant Joseph McCarthy, he compares him instead to another awkward, unlikeable politician who nonetheless got millions of people to vote for him for president in one very close loss, one very close win and one huge landslide: Richard Nixon.

Obviously and most importantly, Cruz is not a paranoiac. He is more ideological than Nixon. And he has none of Nixon’s insecurity, in fact the opposite. Nixon went to tiny Whittier College and resented the Northeastern elite; Cruz went to Princeton and Harvard and could be a member of the Northeastern elite in good standing if he wanted to be.

But Cruz is cut from roughly similar cloth. He wears his ambition on his sleeve and is not highly charismatic or relatable. In high school, he could have been voted most likely to be seen walking on the beach in his dress shoes. If Cruz wins the nomination, it will be on the strength of intelligence and willpower. He will have outworked, outsmarted and outmaneuvered everyone else.

He has a point. Say what you will about Nixon -- and there's plenty to say -- he was a very smart politician. In particular, he overcame the political disability of having an extremely unpleasant personality to win the White House twice.

I've written about Cruz's savvy strategy to appeal to the movement conservatives, the Carson evangelicals and the Paul libertarians here at Salon. And everyone knows he's killing Trump with kindness in the hopes of attracting his angry xenophobes and nationalists over to his campaign if Trump falters or they end up being the last two men standing. He's got important billionaires in his pocket. And now it appears that some of the Republican establishment is taking notice of his sharp political acumen and work ethic and are offering him the respect of recognizing that he's very good at what he does. That's the GOP coalition, right there.

None of that means that Senator Ted Cruz is not a far right extremist. He is. But he is not just a canny politician, he's also a lucky one. After all, without a maniac like Donald Trump being in the race it's very unlikely he'd be in the position he is today no matter how hard he worked or how well he organized. And a smart and lucky extremist is a very dangerous one.