How Margaret Cho revives "Fashion Police": Performing fashion snark as "a woman of color, as a queer woman, as someone who is plus-sized and very proud of my fat" 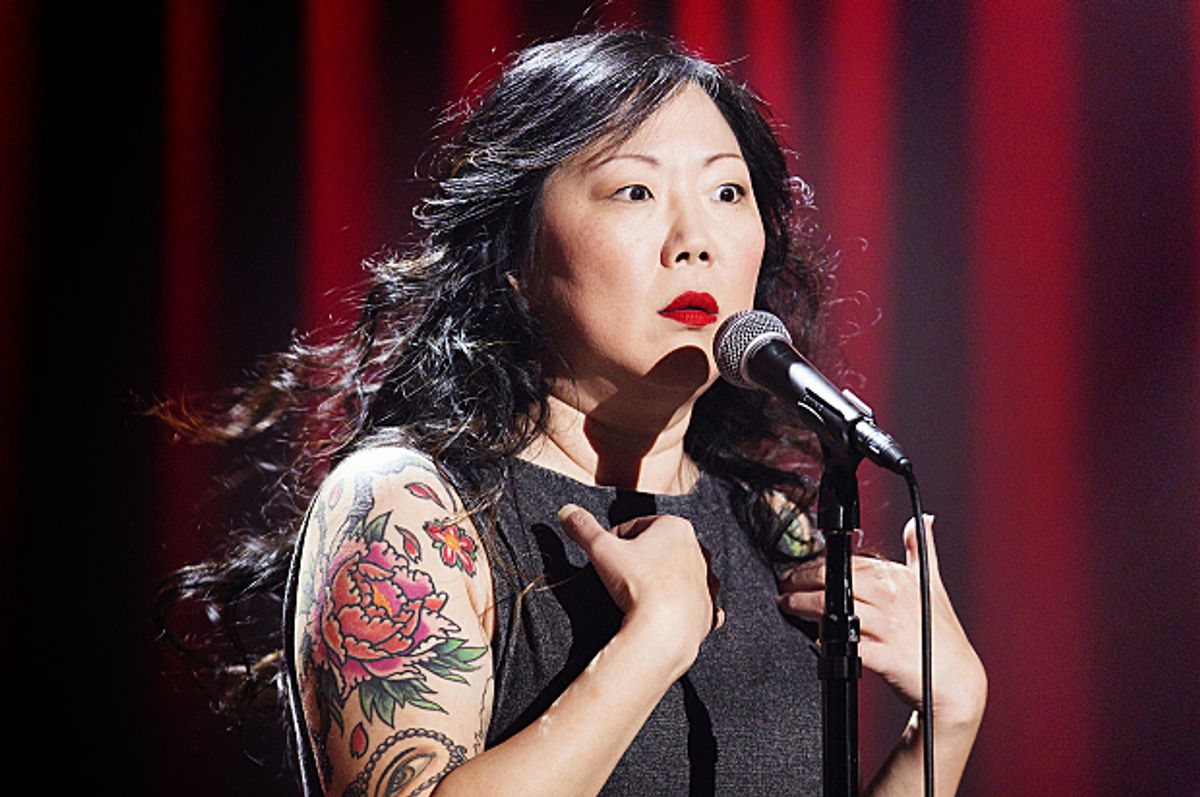 Cho will be joining E!’s "Fashion Police" this season. She was a guest host last season, but now she’s a member of the judge’s panel this season, rounded out by Melissa Rivers, Brad Goreski, and "Fashion Police" veteran Giuliana Rancic. (Cho's representative clarifies that her title is "Special Co-Host.") Cho is the prominent comedian on the panel -- similar to the function performed last season by Kathy Griffin, and by Joan Rivers before her.

Rivers died in 2014, and she was one of the last standup acts who could trace her roots back to Classic Hollywood — back when Ed Sullivan could still make your career. Back when Johnny Carson was the newly crowned king of late night. Back when the mob still ran Las Vegas, and the Rat Pack still played The Sands. Rivers was a brash woman in an era defined by its machismo. She popularized red carpet fashion culture almost singlehandedly. She was, as much as she hated the term, a legend.

And it’s very, very difficult to live up to a legend.

The first "Fashion Police" season after Rivers passed away was an unmitigated disaster. Rancic embroiled herself in controversy after insulting Zendaya's dreadlocks. Kelly Osbourne quit the show. And Griffin, who was dogged by constant criticism and comparisons to Rivers, walked after filming just seven episodes. There was a general sense that perhaps the show was permanently kaput.

But here we are. The new season kicks off on Monday, Jan. 11. And Cho, from an outsider’s perspective, appears to be stepping into a minefield; by her own admission, she doesn’t know much about fashion.

Salon spoke to Cho on the phone about Joan’s legacy, her own qualifications, what she thinks of Rancic and Griffin, and whether she has to watch what she says.

What do you think Joan Rivers brought to the show, and what are you going to bring to the show in comparison?

You can never replace Joan. She created the red carpet. She created the idea of bringing an audience into the spectacle of the red carpet. ["Fashion Police"] wouldn’t have even existed as a platform if she hadn’t generated it; it was her way of bringing [the spectacle] off of awards show coverage and into her own theater. So you can never replace her.

I’ve been so close to her, and her family, and the other people on the show. And so I wanted to go and spend time with my friends, and play around with the idea of, “What can we do, now that she’s not here?” It’s about telling jokes and having a good time. I don’t mean to ever replace her. I just want to hang out with Melissa in this place that Joan built for her and for the rest of us.

Joan always said that that we female comedians were really lucky because we were funny. We could work forever, because our appeal had nothing to do with youth or beauty or any of those things that actresses have to count on. We were beyond that. We were always going to work, because we were always going to be funny. It’s something that’s been proven over years and years of show business.

Do you feel the pressure of not having Joan there? What’s the atmosphere like in that room?

There is no pressure. We can honor her by being as funny and as ridiculous and fearless as possible. Although, Joan was an interesting person; she had lot of fear about whether she was funny enough or good enough. She was always very conscious of whether she was doing the right thing.

I think the cast is very optimistic. I think that after Joan died, everybody needed time to figure out what was going to happen. The show is her voice, and it’s her baby. It’s one of the things that I know she was proudest of creating. I think it’s possible to do it without her. It’s still not the same, but it’s true to her vision.

"Fashion Police" is not in my realm. I’m not a fashionista, although I do have strong views about what fashion is and what I like about fashion. It’s also a place to tell really dirty jokes and try to get away with them.

Can you be more specific in regard to your view of fashion, and what you would like to see more of?

I like it when it’s more artistic — when it’s more about the fantasy and spectacle of the red carpet rather than being in the moment in terms of trends. I don’t have a perfect body, so I appreciate people who still want to feel like they belong, and say, “We have a voice. We can look fabulous.”

Also, I like different attitudes. My favorite clothes have always been the ones that are really outrageous. I like Bjork’s swan dress; that was the ultimate in terms of self-expression and of making it your own. I want to see more stuff like that.

Can anyone ever go too far? Or the more outrageous, the better?

I think the more outrageous, the better. It’s just fun. I don’t have the same perspective as all the other panelists; they all have a different aesthetic. They like classic looks. They like beauty and what is aesthetically pleasing. I like outrageous. I like ridiculous. I like funny stuff… I just go for the gut reaction. It doesn’t have to be from "great" designers; I want to support new designers and outrageousness in any form.

Have you learned more about fashion recently? Or are you trying to preserve the purity of that gut reaction?

I think I’m learning more about it. And I’m also learning about telling jokes; it’s not just necessarily about making fun of people. It’s just a way, for me at least, to tell jokes about what happens in this other world that parallels the real world.

The jokes should never be mean. You should be able to do the joke and have the person there. You don’t want to hurt people’s feelings. I’m not really a mean comic in that way. It’s more about having fun with the listener and having fun with each other.

Yes, but as a whole, fashion is very based upon looks and aesthetics. Do you see a conflict there?

I mean, totally. But you can make all kinds of jokes. This is where Joan and I disagreed a lot. She thought I was fat, and complained about my fat. [Laughs] But I could never complain about somebody’s fat. I don’t have the same sort of aesthetic there.

I think it’s changing in fashion. I think we’re now appreciating different kinds of bodies; it’s not so much of a strident ideal that we’re striving for.

Joan used to tell a lot of those types of judgmental jokes, and get away with it.

With her generation, the attitude was always this "us versus them" — that we need to bring them down to our level, because there was such a separation between celebrities and "real" people. That’s the way that she grew up in show business. And I think she got away with it because she was part of that generation. She also did it in a very loving way and a very sweet way.

I know you’re saying that it’s all about the jokes and hanging out with friends. But it would be naive to deny that there’s a lot of money riding on this. Have you heard any pressure from the network in terms of what they want to hear and what they want to see?

I get paid very little for what I do on "Fashion Police." I don’t know what the other people make, but I make about $5,000 per episode, which is really not a lot. But I love the franchise, and I love being there for my mentor and for Melissa. That, to me, is a payment unto itself. It’s a great joy to do it. I’m sure there’s pressure, but they’re not pressuring me, because they haven’t said anything.

What did you think about Kathy Griffin’s time on the show?

I was in the running the first time [when Rivers died], because Kathy wasn’t sure if she wanted to do it or not. I always wanted to do it, but they went with Kathy.

I tried to talk her out of it so that she would give me her spot! [Laughs] I didn’t understand why she didn’t like it. We haven’t discussed it beyond when she me told she was leaving, and I told her, “Well, you’d better make sure that I get that job!” I always had my eye on it, so I couldn’t understand why it wasn’t a fit. I thought she was perfect. And then a little after that, Melissa told me they wanted me.

Giuliana Rancic kind of stepped into traffic last season over Zendaya’s dreadlocks. Have you talked to Rancic since then about her comments?

It’s hard, because it’s all very volatile. I don’t think she actually got to say what she wanted to say. I think it was taken out of context. Sometimes when you tell jokes, you can’t be complete in your thought.

I don’t know. I wasn’t there, and I didn’t witness it when it happened. But I felt bad. Comedians often get to this place where they’re offending people, and it’s something common that they have to navigate. As a woman of color, as a queer woman, as someone who is plus-sized and very proud of my fat — the more identities you are, the more you can get away with.

Margaret Cho is currently in development for a marijuana-centric dramedy called "Highland," which will debut on Amazon Prime. This April, she will be releasing a rock album called American Myth. You can find out more at www.margaretcho.com.