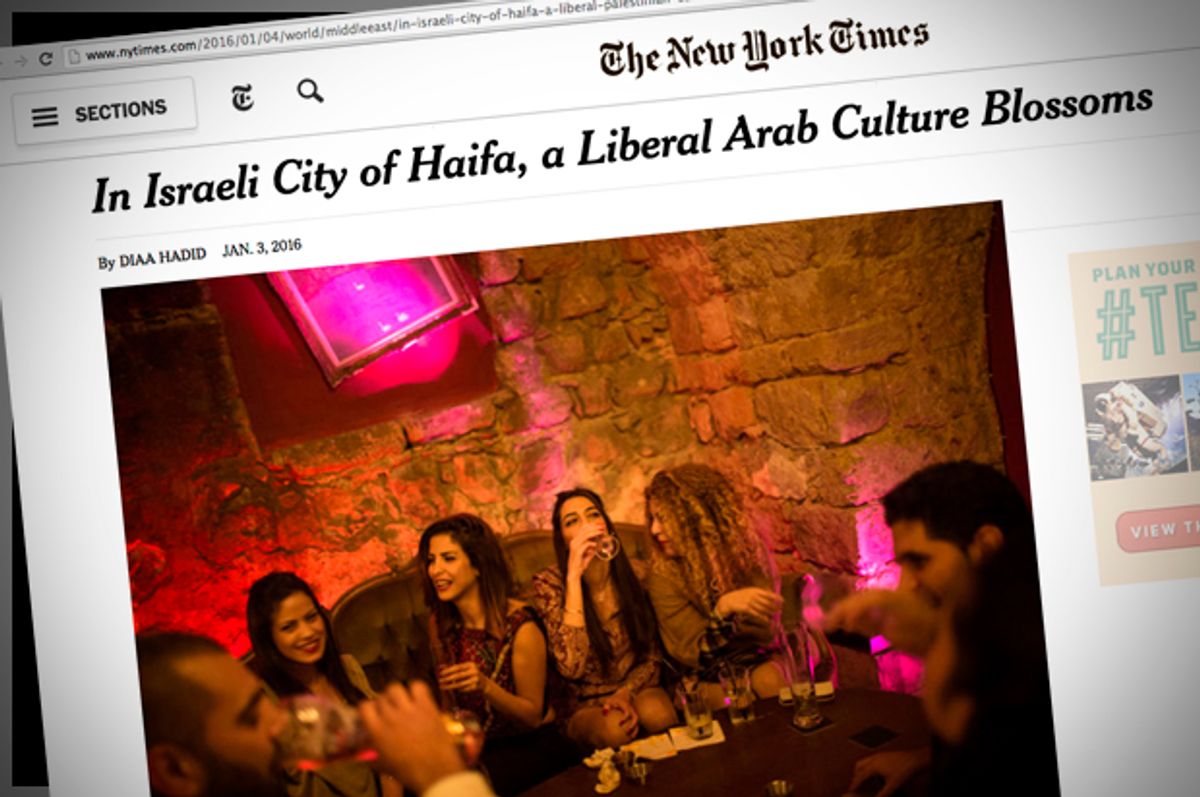 "I think that this interview was my last interview ever, I am done with media!" exclaimed Ayed Fadel.

Fadel is the Palestinian owner of Kabareet, a bar in Haifa, Israel. He was featured in a Jan. 3 piece in The New York Times titled "In Israeli City of Haifa, a Liberal Arab Culture Blossoms." The article, written by Times reporter Diaa Hadid, characterizes the Israeli city as a hub of "a self-consciously Arab milieu that is secular, feminist and gay-friendly," juxtaposing it as "a striking secular counterpoint to the conservatism of many of Israel’s Arab communities."

The Times claims Haifa "has embraced its diversity" and is "a comfortable place for liberal Palestinians who want not only to escape the constraints of conservative Arab communities but also to be among their own people." In order to do so, it quotes young progressive Palestinians like Fadel.

There is a problem, however. Fadel says the Times took his quotes completely out of context.

Three other people interviewed for the article also felt they were misrepresented.

According to Fadel, the U.S. newspaper of record removed all of his criticisms of Israel and its illegal occupation of the Palestinian territories.

"There are so many points missing, crucial ones, that the lack of them make this article shallow, offensive and degrading," Fadel explained.

On social media, the young Palestinian man described the Times interview as a "trap," in order to contribute to an article making Israel look good. He said he "found this piece disturbing."

"It refers to certain aspects and neglects so many others that I personally mentioned during the interview," Fadel explained. "It portrays the modern Palestinian in a 'Western' image that comforts white readers and make them say, 'Oh, they're just like us!'"

Salon reached out to The New York Times for comment. The author, Diaa Hadid, relayed her response for Salon to Margaret Sullivan, who edits the Times' Public Editor's Journal. Sullivan included Hadid's comments in a post published on Jan. 8, a sequel to a previous post published earlier in the morning that summarized criticisms the piece has received from all across the political spectrum.

Hadid stood by her work, which she said she thought "was ultimately fair."

"I thought I had conveyed what they meant – which is my duty as a writer: to not take things out of context, and to be fair to what people mean," she said.

"I wrote this story really because I wanted to pay tribute to Haifa's unique culture, and particularly how Palestinian citizens of Israel had carved their own dynamic, liberal scene in the city," Hadid explained.

"For that reason, I was mortified to find out that at least four people I had interviewed felt that I had misrepresented them in the story, and that it had garnered more criticism than any other story I have written in nearly a decade of coverage the Middle East," she added.

In his previous statements on social media, Fadel strongly disagreed that the representation was fair and accurate.

Fadel says that for "90 percent of the interview we were talking about how the culture of the cultural resistance is growing and taking place in so many levels, such as music, art spaces, etc., and how the Palestinian underground scene is getting bigger and bigger and full of creativity and how literally it is being a place full of intelligence and rebel agenda."

The Times excised the vast majority of what he said, and instead emphasized a few details that confirmed its narrative, Fadel recalls.

It quoted Fadel saying "We want a gay couple to go to the dance floor and kiss each other, and nobody to even look at them, this is the new Palestinian society we are aiming for." Fadel argues this statement was de-politicized in order to shine positively on Israel. "Yes I did say that, but it was a whole build up for the conversation until I reached this sentence," Fadel explained. The larger context was removed.

Most strikingly of all, Fadel says the Times whitewashed his criticism of Israeli pinkwashing.

Pinkwashing refers to a propaganda strategy in which countries, corporations or institutions portray themselves as LGBTQ-friendly, in order to distract from human rights abuses, crimes or misconduct in which they engage.

As an example, Fadel pointed out that the Times mentioned the Palestinian "Kooz queer film festival that we hosted without mentioning that one of the most important topics in it was the Israeli pinkwashing." He emphasized that this "is misleading, especially when I've been totally used as a 'pinkwasher' with the quote above!"

In its article, the Times constantly stressed how Haifa, Israel allows LGBTQ Palestinians to feel open. Never does it mention the Israeli government's systematic discrimination against all Palestinians, including LGBTQ ones.

Nowhere in the piece does the New York Times acknowledge Israel's illegal 48-year military occupation of the Palestinian territories, including the West Bank, East Jerusalem and Gaza, or the illegal almost decade-long siege on the Gaza Strip, or the violence the Israel Defense Forces regularly inflicts upon a largely defenseless occupied indigenous population.

Nor does the Times recognize even once in the piece the fact that, according to Israeli human rights group Adalah, there are more than 50 Israeli laws "that directly or indirectly discriminate against Palestinian citizens of Israel in all areas of life, including their rights to political participation, access to land, education, state budget resources and criminal procedures."

Instead, the article characterizes the oppressive British colonial occupation of historic Palestine as a rosy time "when a lively Arab cultural life flourished."

It furthermore describes Israel's violent forced removal of roughly 80 percent of the indigenous population of Palestine in 1948, referred to by Palestinians as the "Nakba," as "the war in which Israel was established, when Arabs fled, or were forced to leave, their homes in many cities, including in Haifa."

Renowned Israeli historian Ilan Pappé, along with many other scholars and human rights experts, has debunked the myth that Palestinians voluntarily "fled," and has instead classified the Nakba as a form of ethnic cleansing.

Critics on social media characterized the New York Times article as reminiscent of Orientalist portrayals of Israel as a bastion of civilization amid a cesspool of supposed Palestinian backwardness.

Fadel lamented that the Times interview "was another trap by the white media, that is always trying to show us as the 'cool yay hipsters full of tattoos and piercings,' far away from the on-the-ground reality that we are facing and fighting every day."