"The Sopranos" at 17: After watching all six seasons, I'm left with the queasy feeling that the legions of fans of the show have been played

By the end I felt nothing for the hunted, no longer haunted, Tony. What, exactly, was the show about, anyway? 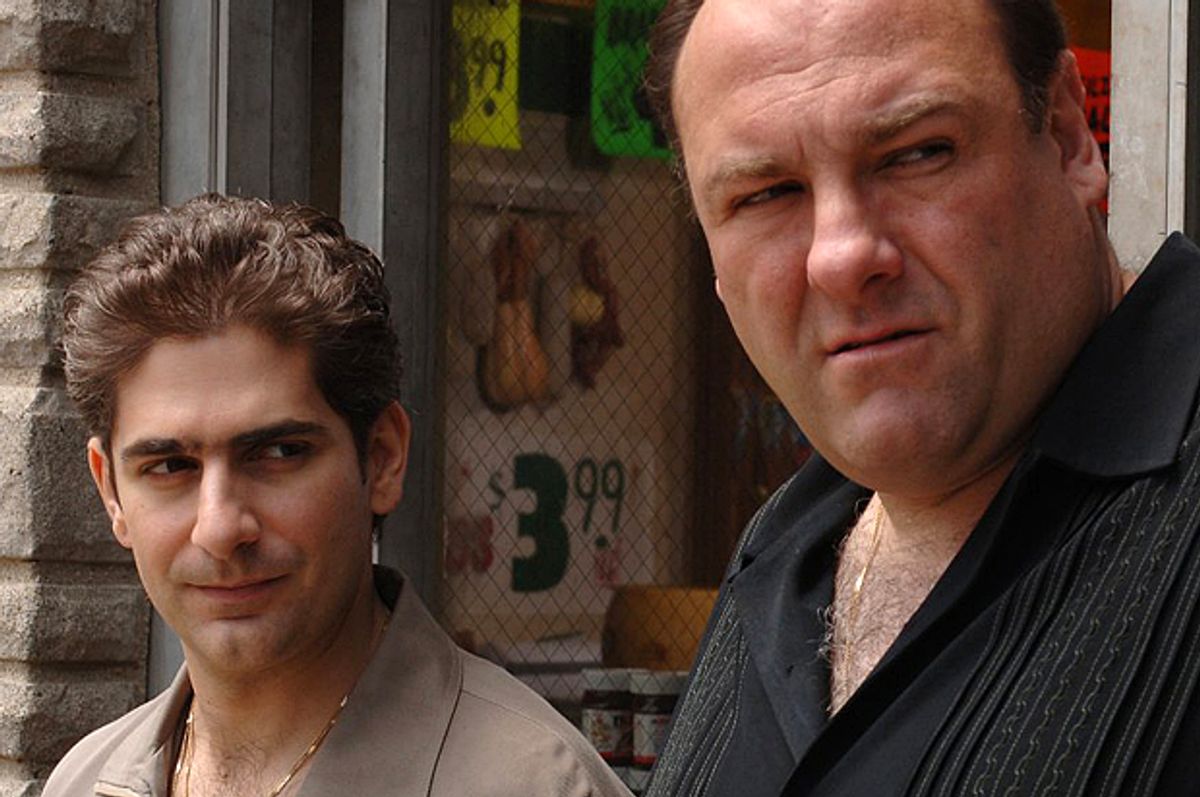 When I read David Remnick’s 2013 declaration “The Sopranos remains the best television series since the beginning of the medium,” my first thought was, Jesus, I hope he’s never seen "The Wire." This was not only because I think "The Wire" is a better show. I’ve just finished watching the entirety of "The Sopranos," spread out over some months, and I’m left with the queasy feeling that Remnick and the legions who herald the show, like just about everyone who ever did business with Tony Soprano, have been played.

I get it: "The Sopranos" is a good show. It leads with a smart premise with scads of potential—a mafia kingpin is having a crisis of conscience that affects his health and drives him into therapy—and the episodes are scripted with flair and cheek, not to mention muscle and sharp teeth. The way that Edie Falco, Dominic Chianese and some of the other regulars deliver their lines can be a thing of beauty, as is the moment in the penultimate episode when Bobby Baccalieri is shot at the model train shop: The miniature trains crash, and the toy passengers’ faces reflect the horror from which they, petrified plastic, can’t turn away. It’s one of several astonishing moments across the series’ run. Still, as episodes unspooled before me, I became distracted by a sense that they weren’t adding up to more than the sum of their bloodied body parts.

The precise reason for my dissatisfaction with "The Sopranos" eluded me for a long time, but by season six—its last—I had it. In “The Fleshy Part of the Thigh,” in which Paulie Walnuts finds out that Ma isn’t his biological mother, he does something characteristically heinous at the episode’s end, after which my husband said, optimistically, “Ah. So this sets him up to be at odds with Tony in future episodes, right?” If "The Sopranos" were a better show, he would have been right: Big moments would necessarily bleed over and infect the story lines to follow, growing something bigger still. But by now I knew that my husband shouldn’t get his hopes up. I’d come to see end-of-the-act "Sopranos" violence as a default setting: It distracts us—we startle, shield our eyes, register the loss of life or working limb—from what seems to me the whole enterprise’s lack of purpose.

I stuck around for all six seasons, figuring that the show would eventually work its fabled magic on me. It never took. At one point, while my husband and I were taking in season four’s “Watching Too Much Television,” I found myself on the verge of saying aloud, “You know what? This is a really good episode.” But then the last scene came—Tony takes a belt to a former ally—reducing all that came before it to cartoon. At the midpoint of one late episode featuring sad sack chef and restaurateur Artie Bucco, I said, “Just wait: he’ll get a beating before it’s over,” and he did.

Here’s another one: At the end of season five’s “Sentimental Education,” Steve Buscemi’s character, freshly sprung from jail and pursuing a legitimate business prospect—he’s a licensed massage therapist now—beats up his benefactor, the idea apparently being that taking the high road is too much for someone who has been so low for so long. But the attack seems untrue to Buscemi’s character, for whom there was every chance of professional success and who had something that can’t be said of his peers: a genuine, sustained interest in something besides taking the easy way out. In "The Wire," when someone trying to fly right succumbed to his old ways, this reflected both character and social forces at work; here, Buscemi’s tirade seemed like a tantrum. While watching the episode, I wondered if the character’s undoing reflected the series’ writers’ undoing. I was also getting bored: What is compelling about watching characters erode with regularity?

“Mergers and Acquisitions,” from season four, was a typically infuriating episode. We’ve been here before: Unable to get what he wants through reasoning, the main player (Paulie, in this case) opts for administering a pummeling (he gets two thugs to rough up his mother’s friend’s son, a childhood pal who is now a school principal). What are we supposed to make of what Paulie did? Is this supposed to be funny? Inevitable? What is the cumulative point of all this? These people are assholes—and? So? Looking back, the series plays its hand early on, in season two’s “Bust Out,” in which a bystander does a good deed: He tells the cops that he has witnessed a murder. But the show plays him for a fool: The tweedy nebbish is sitting at home, listening to atonal jazz, his dictionary ostentatiously on a stand across the room, when his wife happens on a newspaper story about how Tony Soprano may be involved in the crime, which implicitly puts her husband’s life at risk. The wife becomes risibly alarmed, and the man turns sniveler, racing to the phone to tell the cops to retract his story. This scene was obviously played for laughs, and I was struck by what felt like the mean-spiritedness of the episode’s writing: It sets us up to root against the good guys.

To be sure, I was riveted as much as the next person by the third season’s “Pine Barrens,” a Buscemi-directed fan favorite, in which Christopher Moltisanti and Paulie end up in the snowy woods in a standoff with a Russian mobster. But as I watched, I was aware that the satisfaction I was deriving approximated the satisfaction I might register while watching an action movie: The only thing at stake was, would Christopher and Paulie find their way out of the woods? Would I have cared if they didn’t? Throughout the series, I found myself not feeling much of anything when a character kicked it. No one deserved to wear a halo on "The Wire," but usually when someone went down, it was cause to feel something because each character was a mixture of baseness and some degree of aspiration to do better—like a real human being, in other words.

By the end of "The Sopranos," I felt nothing for the hunted, no longer haunted, Tony. His existential crisis was the purely literal kind now. The show’s original proposition—his pangs of conscience lead him to pursue therapy—was dust. What was "The Sopranos" about now? In 2007, Remnick wrote of the series, “The show evolved in the manner of a sprawling social novel of the nineteenth century.” Yet the social novel by definition has something to say. “It’s a metaphor for how the government works,” a friend of mine said of "The Sopranos," which sounds good—hey, I’d want to watch a show that was about that—but this doesn’t wash: the idea is that the U.S. government is corrupt, just like Tony and his associates? Well, some, even many politicians are corrupt, sure, but in a democracy there are enough good guys to hold off total and complete Sopranos-style lawlessness.

I was going to conclude by saying that after "The Sopranos’" lead pipe to the kneecaps grabs viewers’ attention, it isn’t sure what to tell us. But maybe I just don’t like what I think it’s saying. Overarchingly, "The Sopranos" promises that the outcome of a choice will be what "Girls" promises the outcome of a sexual encounter will be: Things will almost always go very, very badly. Cynicism as an engine of art is grand—literature would be lost without it—but both "The Sopranos" and "Girls" are reaching for some semblance of realism, and it just isn’t accurate or fair to suggest that all paths lead to failure at pretty much all times. In real life, some people do manage to, un–Ginny Sack–like, achieve their weight loss goals and, contra Moltisanti, stay off drugs. The people spinning "The Sopranos" seem to be saying that there’s no hope for any of us.

The lack of intellectual engagement or challenge I felt while watching the show (They’re just going to kill someone off in the last few minutes? Again?) seemed to reflect something inartistic at work: the series’s gratuitous cynicism. By all means, be cynical—but earn it. Instead of foreordaining his doom, show us a character fighting for his integrity, and then, sure: let the bad guy, or the bad impulse, win—sometimes.

For me (but not just me), "The Wire" was as life-changing as a fictional television series could be. It opened my eyes to the folly of the drug wars, and got me to see culpability when anyone participates in the drug trade (yes, even as a casual consumer). "The Wire" also affects viewers in such a way that it seems impossible to mention the show to another fan and not spend the next 20 minutes yakking about it. (Is there anyone who has seen the first season of "The Wire" who can look at the young actor Michael B. Jordan today and not bring hand to heart?) Because "The Sopranos" is the show that’s "The Wire’s" closest peer in terms of genre, era and accolades earned, I expected more of it. And I truly would have preferred to yammer about something besides its shortcomings.

So yes, "The Wire" ruined me for "The Sopranos," but I’m glad it did if it raised my standards for what to ask of “the best.” For me, "The Sopranos" lacks a key ingredient of greatness: what I can only call, with more than a scintilla of embarrassment at the fustiness of the phrase, a moral vision. But if you love "The Sopranos," then that’s a wonderful thing: may it enduringly be a source of joy and/or release in your life. Just be honest about why you love it. My husband enjoyed the show more than I did. At one point he chided me, “Stop looking at it realistically.” That’s entertainment.

The Sopranos The Wire Tv