This is the end of John McCain: Why the Arizona senator could finally be facing retirement

The GOP nominee just 8 short years ago, John McCain is now fighting off yet another strong primary challenge 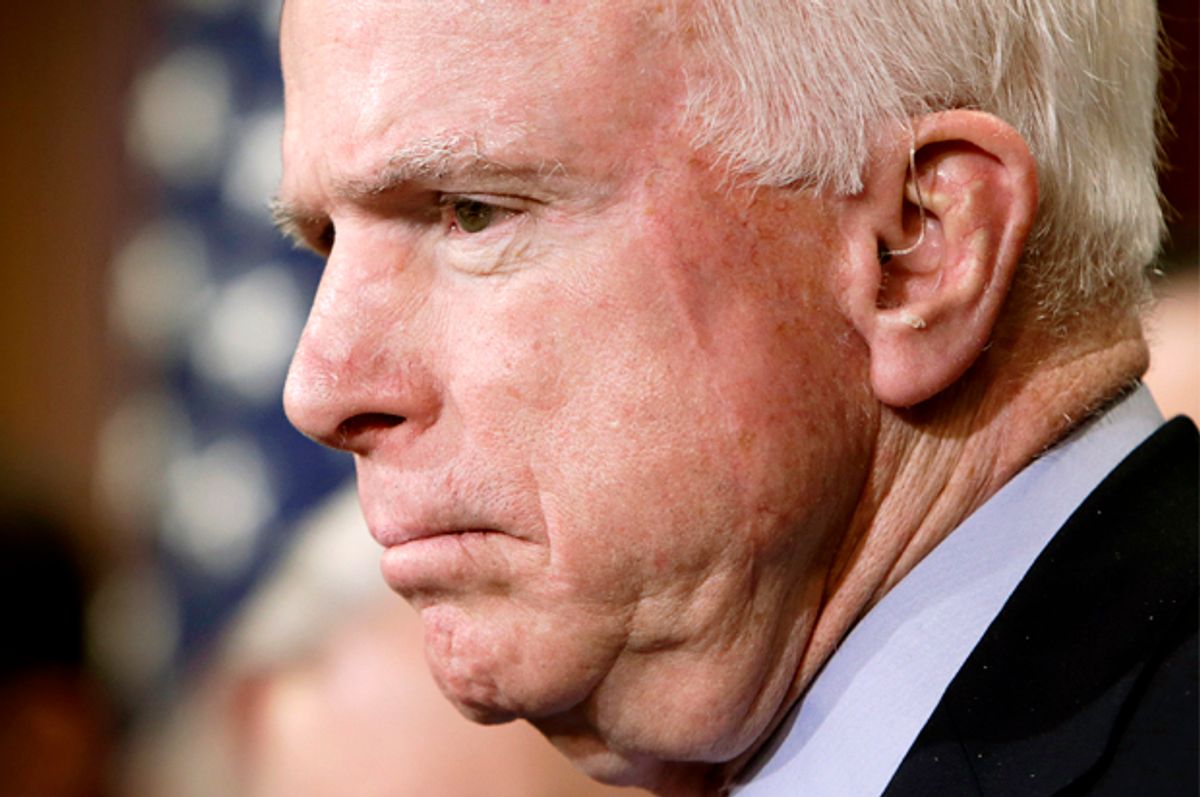 Five and a half years after Senator John McCain killed off what was left of The Maverick — the independent-thinking, "not afraid to tell it like it is" character he’d been LARPing since the 2000 Republican primary — in order to win a contentious primary against Tea Party challenger J.D. Hayworth, he’s facing the prospect of the end of his career once again. This time, it’s against a state senator who’s perfectly content with grifting votes at a Donald Trump rally. McCain’s seat has been targeted by conservative groups for years now to no avail, but this time, it’s a fair question to ask if McCain’s heart is in it anymore. And even if it is: Does anyone even care?

McCain went from being the leader of the party in 2008 to the poster boy for RINOism almost immediately after, and the right wing was emboldened by his loss to blame his -- and later, Mitt Romney’s -- perceived lack of conservatism for the party’s failure to keep Barack Obama out of the White House. Over the past couple of years he’s been at the forefront of a very public argument with ultraconservatives like Senators Ted Cruz, Mike Lee, and Rand Paul for control of the party, and McCain’s tendency to work with Democrats on a few different issues have made him the right wing’s biggest internal enemy.

Even McCain’s military career has, however cynically, come into question of late. Back in July, Donald Trump insulted John McCain by saying he “liked people who weren’t captured,” a reference to McCain being a prisoner of war for five-and-a-half years in Vietnam. Bill Kristol swore that this would eventually kill Trump’s insurgent campaign, and the political press questioned whether or not Trump had finally gone too far. Five months later, he’s still here, and still dominating in the polls.

Not leading the polling for president, coincidentally, is Senator Lindsey Graham, whom McCain endorsed to run essentially the same campaign he did in 2008. Graham, a foreign policy hawk who has shown a willingness to compromise with Democrats on issues such as climate change and immigration, didn’t participate in a single one of the main GOP debates, and polled with a quarter of the support that Mike Huckabee has before dropping out of the race in mid-December.

Graham, who’s been embraced as One of the Good Republicans in this primary despite his propensity to want perpetual war with multiple countries at a time, took a shot at a few of the frontrunners in the race in his farewell video, claiming his campaign made “enormous progress” in fighting the “isolationist” wing of his party. Given that Graham essentially ran a campaign that was the spiritual successor to McCain’s two runs — he was the only Republican to slam Trump from the start — this is a round rebuke of that brand of conservatism.

Vox’s Andrew Prokop argued that Graham’s exit was a big opportunity for either Chris Christie or Marco Rubio to pick up an endorsement for McCain, but with the anti-establishment (and anti-McCain) Trump and Cruz occupying the top two spots in the polling, it’s clear that having the 2008 nominee on your side is more of a liability than an asset at this point. Marco Rubio is the closest thing to a neoconservative with an inkling of a chance to win, but he has greatly downplayed the one time he tried to cooperate with Senators Graham, McCain, and Chuck Schumer on immigration, which has drawn the ire of McCain. (McCain, of course, has no room to talk about waffling on immigration in order to cater to ultraconservative primary voters.)

Obviously, this could change with one presidential election where someone from the anti-establishment wing gets roundly rebuked by the electorate, but the truth is that the current incarnation of the Republican Party simply doesn’t have room for people like McCain and Graham anymore. Graham and McCain are not moderate politicians; to be sure, their love of war outpaces nearly anyone else in the Senate. They’re seen, however, as remnants of the neocon years, a period that the Republican Party of today would like to pretend didn’t exist.

Enter former state senator Kelli Ward, who’s challenging McCain in the primary and lines up perfectly with the way Ted Cruz and Mike Lee see the world. In the three years Ward was a state senator (she resigned to run in this race), she: indulged her constituents’ worries about chemtrails; defended Donald Sterling; hung out with Cliven Bundy; and tried to repeal liberal, gun-grabbing Arizona’s ban on silencers and sawed-off shotguns. If there’s any remaining doubt that Ward wouldn’t immediately align herself with the Cruz and Lee wing of the party, she was also the only member of Arizona’s entire legislature to vote against a boost in funding for the Arizona Department of Child Safety.

There are signs that McCain is gearing up for another drawn-out primary battle, and cares about it enough to again call for insane solutions (like shutting down the government) to non-existent problems (Planned Parenthood funding) in order to appease and cater to the extreme right of his party. But this time, it might not work: The Maricopa County Republican Party censured him last year for being a loony lib, and at least one party official is pushing the state GOP to endorse another candidate ahead of next year’s election; a poll in August had him losing to Ward by nine points; and in November, a Morning Consult poll of Senators’ approval ratings in their states found that he had a 41 percent disapproval rating among Arizonans, the second highest in the country.

These are not good signs for an incumbent, especially one who has been there for nearly 30 years. In 2010, he was able to maneuver away from the anti-incumbent wave that ended the careers of Bob Bennett in 2010 and Dick Lugar in 2012. Although Hayworth put up a fight against McCain, he never led him; Ward leads McCain early, and in late December, she was endorsed by a slew of Arizona state legislators, providing even more evidence that Arizona Republicans think she’s their best chance to finally rid the Senate of John McCain.

But even if McCain were to fend off Ward in the primary next year, It’s hard to think of a single reason why the 79-year-old senator would even want to do this anymore. Marco Rubio thought the Senate sucked so much that he’s quitting after six years; McCain is entering his 30th. He’ll be 80 in November. And in the three years since he called Ted Cruz and Rand Paul “wacko birds,” that wing of the party has only gained strength in Congress.

Most importantly, the Senate doesn’t operate like the way McCain wants it to anymore. The disgust in his face is palpable every time he lectures someone on “the rules of the Senate” or “how stuff gets done in Congress.” It’s like watching someone try to explain calculus to a nine year old, only the nine year old thinks calculus itself is broken, and the only way to fix it is to either defund calculus or make it simpler than multiplication tables.

It’s a real problem for John McCain that he is actively loathed by the base of his own party, and his potshot at Ted Cruz on Wednesday gives an inclination that he just doesn’t give a damn anymore, if only because he knows that Ward is probably going to end his political career. The story from over the summer that McCain accidentally became an official in the Ukrainian government was good for a laugh, but you have to wonder if McCain really wanted to turn that position down. After the last five years of being used as a punching bag by the right wing, as well as the complete erosion of his influence in the GOP: wouldn’t it be nice to feel wanted again?