Donald Trump talks at a fourth-grade level. Maybe that's why the Fox News audience loves him

The culture of anti-intellectualism in America is fueling hateful, racist demagogues -- in politics and on TV 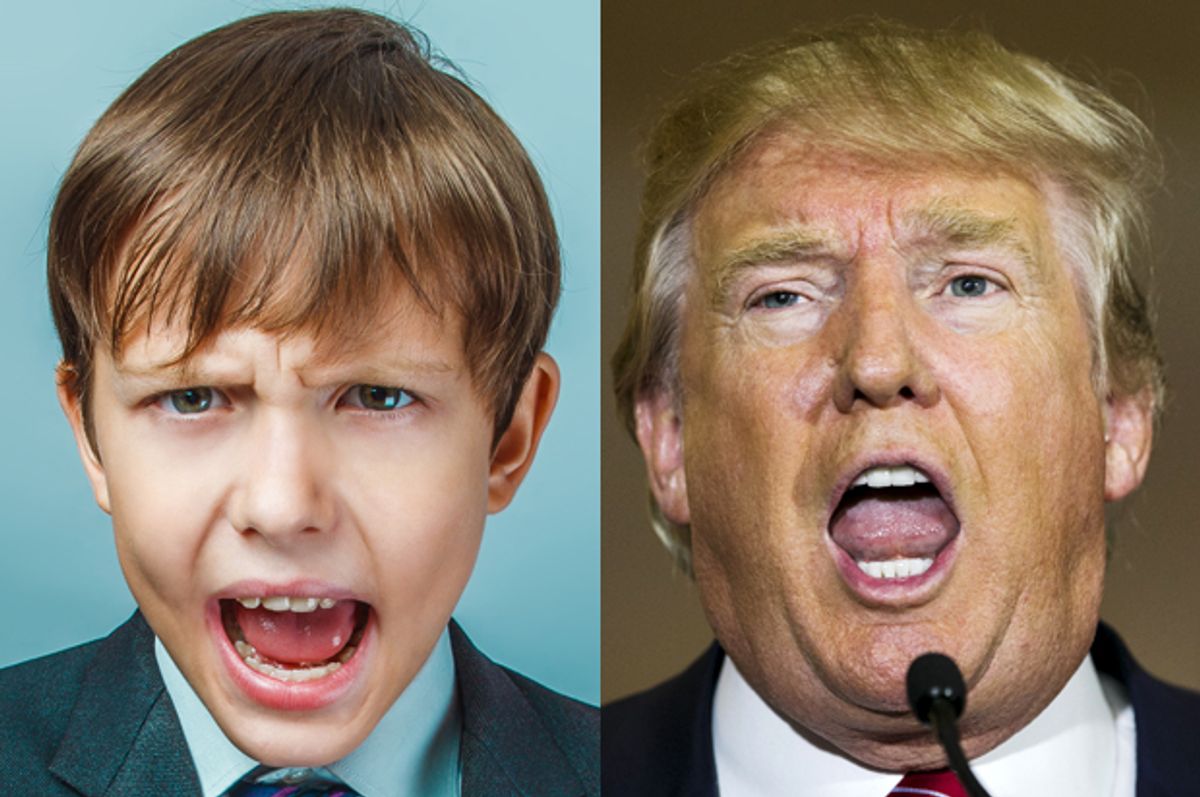 It’s a cliché to say that democratic states can’t function properly without an informed electorate. But it’s absolutely true. And this is why, heading into the 2016 election year, I’m nervous about the future. With Donald Trump leading the Republican presidential contenders, even many Republican die-hards are shaking in their boots.

But Trump isn’t the cause, just the symptom. The deeper cause is a strain of anti-intellectualism that runs through the roots of American culture. And while this strain is found on both sides of the political spectrum (see some liberals on vaccines and chemtrails), it’s mostly concentrated among religious conservatives on the political right. For those who espouse anti-intellectualism, conspiracy theories have the same clout as legitimate science, the opinions of non-experts are just as credible as those of the experts, and ideology takes precedence over the cold hard facts.

The US has fostered a culture of anti-intellectualism more than “most other Western countries.” While traveling through Europe and the UK for extended periods of time, I’ve often been quite envious of how respectful other countries are toward those with knowledge in the fields of science and the humanities. In the UK, for example, it’s generally not seen as “uncool” to have a higher degree from a good university. Often, it confers the degree-holder a certain social respect and admiration. Many of the top comedians in the UK have attended institutions like Oxford and Cambridge, including Michael Palin, Eric Idol, John Cleese, David Mitchell, Richard Ayoade and Stephen Fry. And shows such as "QI," which combines academic discussions with uproarious, irreverent humor, are popular hits.

Not only is the U.S. unique for its love affair with anti-intellectualism, but this romantic relationship appears to have grown stronger over the past few decades. A primary reason for this is no doubt the huge influence that conservative media have had on American culture, such as Fox News, which is currently the most trusted news network in the country. The problem is that “Fox News” is a misnomer. The network is, to quote Jon Stewart, more of a “relentlessly activist” organization for conservative causes than an intellectually honest conveyor of information. Indeed, there are to date at least seven academic studies that have found that Fox News’ viewership constitutes the most misinformed audience out there.

From climate change to healthcare, the Iraq War to the country of Obama’s birth (no, it’s not Kenya), denizens of Fox News are more confident about falsehoods than viewers of any other news network. Several studies even found a positive correlation between how often one watches Fox News and the degree to which one’s worldview is misinformed.

What’s most dangerous about Fox News, though, isn’t its cynical use of Orwellian doublespeak, as in “Fair and Balanced” and “No Spin Zone,” to conceal a conservative agenda. Nor is it the network’s repeated failure to accurately report the facts. Rather, the most dangerous consequence of Fox News is that it discourages that most important form of rigorous curiosity called critical thinking. If people want a single phenomenon to blame for the gradual decline of the American empire, direct your wagging finger at the devaluation of critical thinking skills.

It’s not an accident that Fox News wants an audience that isn’t preoccupied with carefully dissecting complex social, political, economic and religious issues. Critical thinking is perhaps our very best strategy for apprehending the true nature of reality, and as the great comedian Stephen Colbert once declared, “reality has a well-known liberal bias.” In other words, critical thinking could lead to liberalism — or worse, to that most dreaded form of liberal fanaticism called secular progressivism.

Scientific studies actually back up this line of reasoning. Consider a 2012 study published in Science, one of the most prestigious journals in the world. This study found that when people are prompted to use their critical faculties, they become less likely to affirm religious statements. In other words, there’s a causal link between “analytical thinking” and religious disbelief. Perhaps this is why the Republican Party of Texas literally wrote into its 2012 platform that, “We oppose the teaching of Higher Order Thinking Skills (HOTS) (values clarification), critical thinking skills and similar programs [that] have the purpose of challenging the student’s fixed beliefs.” God forbid children start questioning their “fixed beliefs” about religion — or politics.

Yet another peer-reviewed paper found that people who think “deliberately” and “effortfully” about certain topics tend to express more liberal views. As the authors put it, “political conservatism may be a … consequence of low-effort thought,” meaning that, “when effortful, deliberate thought is disengaged, endorsement of conservative ideology increases.” Moving from how people use their brains to the brain’s innate capacity, multiple studies have reported that liberals (and atheists) have higher average IQs than conservatives. One study even found that low childhood IQ predicts conservative and racist beliefs later in life. It follows from such data that the divide between right and left isn’t just about differing social, political, and economic philosophies. It’s also about the the role of the intellect in determining our normative worldviews.

The point is that when a large portion of the electorate is fooled into adopting an ideology of ignorance, spaces open up for charlatans, frauds and demagogues to gain political power over the masses. This is precisely what we’ve seen with the rise of Trump in 2015, and it’s why he’s a symptom of the disease rather than a cause, as mentioned above. Indeed, according to a recent poll, Trump’s support base consists of the least educated Americans. As a Washington Post article put it, “Even when pollsters took race out of the equation — to the extent that that is possible since the Republican base is overwhelmingly white — and looked at all Republicans, the relationship between education and Trump support was pretty clear.”

This conclusion is consistent with a Boston Globe analysis that found that Trump talks at a fourth-grade level. And it fits with the observation that the more outrageous, harebrained, foolish, and asinine Trump’s claims — from John McCain not being a “war hero” to shutting down parts of the Internet to violating the Geneva Convention by killing terrorists’ families to temporarily keeping Muslims out of America — the more Trump’s poll numbers seem to rise. Holding beliefs that are properly tethered to reality via the best available evidence doesn’t matter much to the army of quasi-fascist conservatives who’ve been hypnotized by Trump’s shallow charisma.

Even more, Trump ended his year of media domination by receiving Politifact’s 2015 “Lie of the Year” award for the long catalog of erroneous statements that he made, and often stood by even after they were shown wrong. It’s amazing that a whopping 76 percent of the statements by Trump that Politifact checked were judged to be “Mostly False,” “False,” or “Pants on Fire.” By comparison, 71 percent of Bernie Sanders’ statements were rated “Half True,” “Mostly True,” or “True.” What an extraordinary contrast, yet one that’s not surprising given Sanders' more academic approach to politics. Indeed, Sanders is the sort of rare — and rarefied — politician who’s actually paid attention to scholars over the year. He once even invited Noam Chomsky to give a talk at Burlington City Hall, in Vermont, in which Chomsky wasted no time presenting an incisive critique of U.S. foreign policy.

The real menace of Trump’s presidential campaign, though, isn’t that he’s a pathological liar with 39 percent of the Republican vote. It’s that he — along with Fox News — works to actively undercut the perceived trustworthiness of facts, expertise, and science. For example, in response to receiving Politifact’s dubious award for lying, he responded on Fox News by attempting to delegitimize the organization, calling them “a totally left-wing group” that’s “bad news, I mean as far as checking. You could tell something 100 percent and they will make it out to a lie if you’re a certain person.” Once again, Trump gets it wrong — “Pants on Fire!” In fact, 29 percent of the statements by Sanders are rated “Mostly False” or “False,” meaning that even a “totally left-wing” politician has been shown to misquote the truth on occasion. It’s not Politifact’s fault that Sanders happens to be better at getting the facts right.

What makes Politifact a reliable, although not infallible, source of knowledge is that it’s founded on the solid ground of epistemology. It’s completely transparent about why it rates some claims true and others false, and its methodology involves consulting genuine experts (such as professors) and identifying verifiable facts (along with links) to substantiate its rulings. Most importantly, Politifact’s approach recognizes that beliefs about the world must always be the destinations of a truth-seeking journey and never the points-of-departure. This is precisely why critical thinking is so important: it’s what enables us to proceed from a state of ignorance to one of knowledge, using evidence as our “guide to truth.” In contrast, ideology — whether social, political, economic, or religious in nature — assures us that we already have the knowledge we need and that further thought is therefore unnecessary.

How do we solve the growing scourge of anti-intellectualism in America? There’s no easy answer. I suspect that the Fox News generation — a demographic that’s on the way out, I should add — is a lost cause. No amount of evidence-based argumentation will ever convince them that their views are factually incorrect or morally misguided. In fact, a 2010 study found that presenting political partisans with contradictory facts often only solidifies their erroneous convictions. The reality is that our country is facing a number of huge problems, such as global warming, immigration, gun violence, terrorism, health care, and biodiversity loss. All of these are solvable, yet as I’ve explored elsewhere one finds the conservative right consistently denying the problems and obstructing the solutions. The fundamental difficulty with changing the culture of anti-intellectualism is that the anti-intellectual position is self-reinforcing. It suppresses critical thinking, which is precisely what’s needed to see the folly of anti-intellectualism. (Incidentally, John Cleese makes a similar point about “stupidity” in a hilarious Monty Python video.)

Although the older generation is on its way out, I just hope they don’t do too much damage before the younger, more progressive generations have a shot at making the world a better place.