It's the Mormons and the Kochs: The secret roots of white, male Bundy rage 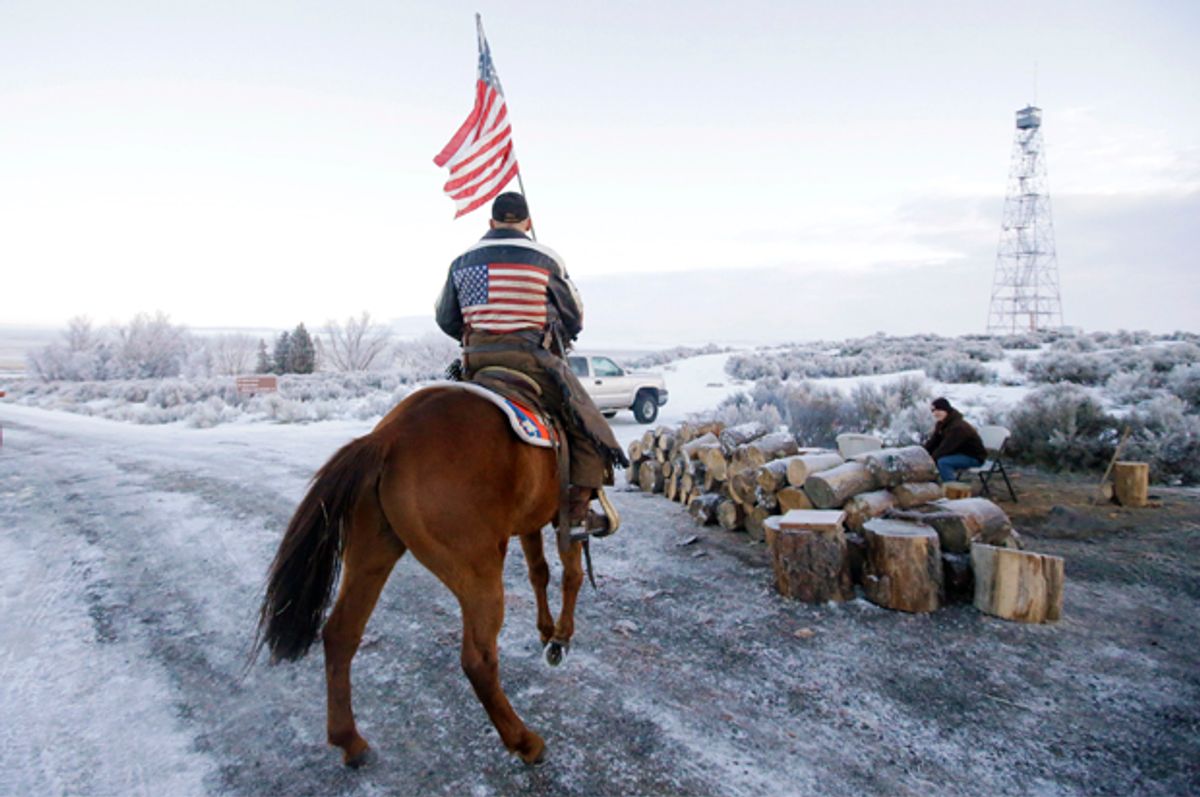 For rationalists, 2016 has gotten off to a rough start.

This time, Americans have their own religious folk to blame. The mundane origins of the religion in question should provoke smirks, to say the least, among nonbelievers, but for at least some of its votaries, this is a faith worth dying — and killing —  for. Less humorous is the challenge being posed to our Constitution and the ties to powerful moneyed interests.

Almost two years after Cliven Bundy, the renegade Nevada Mormon who orchestrated an armed confrontation with the federal government to avoid paying fees for grazing cattle on public land, wondered aloud to reporters about whether “the Negro” was better off under slavery than “under government subsidy,” his son Ammon (also a Mormon) is treating us to a farcical, yet still potentially deadly, reprise of the standoff led by his father.

By now you must know the story, but here’s a recap, just in case. On Jan. 2, in the boondocks of Oregon, Bundy fils and an undetermined number of self-proclaimed fellow “Citizens for Constitutional Freedom” (in reality, guys with guns who reject the very rule of law enshrined in the Constitution) seized the Malheur National Wildlife Refuge and have refused to budge, all in solidarity with Oregonian ranchers (and convicted arsonists) Dwight and Steven Hammond and their plight.  They are demanding justice for the Hammonds, and pledge to resist the "terrorism that the federal government is placing on the people."

Ammon Bundy’s brother Ryan even declared that they are ready to “kill or be killed if necessary.” Local law-enforcement agents are calmly negotiating with them. The Obama administration, despite the federal nature of the crime, is taking a hands-off approach.

Whether or not Ammon Bundy and his comrades have any legitimate grounds for discontent, the Malheur standoff is going about as well as the wildlife refuge’s name (which means “misfortune” in French) would presage.  The Hammonds have disavowed the dangerous stunt, returned themselves to prison as ordered, and asked President Obama for clemency.  Food supplies have at times run low, reporters and curious onlookers have outnumbered Bundy’s “Citizens,” and Fox News host Sean Hannity, once a supporter of Bundy père’s 2014 affair, has expressed skepticism. Even Ted Cruz has told them to “stand down.”  As for the Church of Jesus Christ of Latter-day Saints (aka, the Mormon Church), it has issued a statement of disavowal: “This armed occupation can in no way be justified on a scriptural basis.”  But the Bundys adhere to a militant brand of Mormonism and probably don’t care.

This whole mess stems from, it turns out, the telepathically transmitted commands of a supernatural Supreme Commander, who, Ammon Bundy tells us in the 20-minute “Dear Friends” video he posted on Youtube, is none other than the Good Lord Almighty. With incoming emails pinging softly on the MacBook Pro in front of him, sniffling and twiddling his thumbs, Bundy looks into the camera and tells us about his “righteous cause,” about how, one evening before he seized Malheur, a Providentially dispatched text message evoked within him “this urge, this overwhelming urge” to find out all he could about the Hammonds (who had been released after serving their first stint in jail). He spent the night doing the appropriate Lord-mandated research.  The next morning, he suffered the deranged cacoethes scribendi characteristic of so many faux-faith visionaries, but with “emotions clouding [his] thoughts,” he decided, before hitting the keyboard, to conjure up authorial succor from his imaginary celestial overseer.

“I got on my knees and asked the Lord,” Bundy tells us. “I said, Lord, if you want me to write something, please help me clear my mind, and show me what I should write.”  The Lord duly obliged, of course, and also conveyed to him His angst over the Hammonds’ tribulations.  “I began to understand what the Lord felt about the Hammonds . . . [and] Harney County, and about the country.  I clearly understood that the Lord was not pleased about what was happening with the Hammonds.”  Why the Almighty Creator should be just sitting up there in heaven fretting about this, and not, say, hurling lightning bolts at the miscreant earthlings displeasing Him, Bundy does not explain.

Portentously, however, Bundy also inferred from his chat with the Lord that “accountability” – presumably, divine retribution – and “tyranny” would result from the Hammonds’ saga, and for “all Americans,” unless he acted straightaway.  “So I did exactly what the Lord asked me to do.  I did it the way he asked me, the best I could,” allowing that the Lord “works with imperfect people,” (which, I suppose, means we should expect a glitch or two, perhaps a gun battle or a Waco-style immolation, down the line).  No matter, Bundy asks us all to “come to Harney County and participate in this wonderful thing that the Lord is about to accomplish.”  Presumably, with our own assault rifles and ammo.

Like père, like fils. In 2014, Bundy Senior had announced that the Lord had commanded him to face civil war if the Feds didn’t back off.  (This has not stopped him or his son from availing themselves of copious federal largess, which adds the sin of hypocrisy to their crime of sedition.) The Feds did back off, and still have not prosecuted anyone, which surely emboldened Ammon Bundy and inspired him to mount his challenge to the rule of law in Oregon.

The Lord ordains Bundy-esque sedition and the federal government permits it, so there must be something to this religion business. (Cliven Bundy had already said as much.) Unanswered are questions about why the Omnipotent One allows such controversies to arise in the first place, and why He repeatedly chooses to communicate with His underlings via psychopathic symptoms such as visions and voices in the head.  And why is He so averse to showing Himself?  Couldn’t He at least post instructions on Instagram? What about a tweet or two?

Seriously, though, the rank bizarreries of the Mormon faith are implicated in the Bundy family’s decision to stand up to Washington. Even rationalists accustomed to religious absurdities will find them worth a laugh. It all began in 1826, in New York state, with the shenanigans of a known (per court documents) “disorderly person and impostor” by the name of Joseph Smith, who had been accused of fraud and occult practices. Though of such reputation that no reasonable person should have trusted him, the Good Lord selected him as His emissary to humanity. Smith received divinely moronic – I mean Moroni-c, as from the Archangel Moroni – tidings that turned out to be a revelation key to our salvation.  The Lord being the Lord, He did not just beam down a hard copy of these tidings, but instead scribbled them on gold tablets in an ancient tongue, and buried them near Smith’s residence.

Smith, of course, unearthed the tablets.  But how to decipher them? God came to his aid, providing impostor Smith with a “seer stone,” which he merely had to pop into his hat and -- voilà! -- he acquired the ability to translate. The result is the Book of Mormon and a major religion. Further ludicrous misadventures soon followed, which led to Smith’s persecution and eventual murder, thus setting off, in 1846, the great Mormon Exodus, led by Brigham Young, westward into the wilds, including Utah and, yes, Oregon. There they have been ever since.

When Cliven Bundy aired his opinions about “the Negro,” he was freelancing with long-hallowed, if now officially superseded, Mormon tradition. The Mormon faith, all the way until 1978, sanctified racism, and excluded from its orders Africans, whom the Lord allegedly cursed with dark skin for not siding with Him in the battle that ended with Satan being bounced down into hell. Ammon Bundy’s current undertaking also wreaks of Moroni-c benison and thus has a doctrinal basis: Brigham Young foresaw the day when the Mormons would have to step in and “save [the Constitution and the Republic] from utter destruction.”  Ammon Bundy, in his Youtube video, calls the Constitution the “supreme law of the land” and purports to be doing just that.  Mormons, you see, consider the Constitution holy.

Such father-and-son militancy is par for the Mormon course. Smith had, after all, announced that, “We will establish our religion by the sword . . . .  I will be to this generation a second Mohammed.” Let’s skip over further doctrinal inanities, though, and just recognize the sedition of any statement that citizens of a republic based on secular law can disobey that law with divine justification. Seditious inklings do, in any case, inhere in Mormonism as Brigham Young preached it. They concur conveniently with a persecution complex (once justified: remember the Exodus) and a scriptural hands-off for those lusting after lucre. Joseph Smith himself pronounced that “Wherefore, verily I say unto you that all things unto me are spiritual, and not at any time have I given unto you a law which was temporal.” Personal wealth is a blessing signifying the Lord’s favor.

Which makes it reasonable that the Church of Latter-day Saints of Jesus Christ should have a gigantic, for-profit subsidiary. According to a 2011 Newsweek report, the Church, in fact, "resembles a sanctified multinational corporation — the General Electric of American religion, with global ambitions and an estimated net worth of $30 billion," and just happens, writes Chris Zinda, to “own the largest cattle rank in the country,” and much other property all over the West.  (Please read Zinda’s fine article, or watch an interview in which he summarizes it.)  Zinda also details the long-standing shared interests between the Church and the Koch brothers – interests that consist in acquiring public lands and exploiting them, and derive from a sickeningly intimate relationship between the Church and the ultraconservative, limited-government John Birch Society, of which Fred Koch (the Koch brothers’ father) was, it turns out, a founding member.

The upshot, says Zinda: We confront a constitutional crisis in Oregon because, in the Bundy case and others, the “Federal government . . . through its lack of conviction or outright inaction, has consistently emboldened seditionists who have a dangerous persecution complex by refusing to enforce the law of the land [and] now refusing to protect public land rights.”

No one is saying that the Bundys have been coordinating the seizure of the Malheur National Wildlife Refuge with the Koch brothers, but their anti-federal-power-over-land strivings do coincide. Once again, religion is effectively serving mammon and the financially mighty, deploying as foot soldiers the less wealthy, if well-armed, dupes of faith, including Ammon Bundy.

We need the Obama administration to show resolve in ending the Bundy seizure of the Malheur center and then prosecute the perpetrators to the full extent of the law. Further White House inaction will only result in more usurpations.

The spirit of our secular republic and what remains of our plutocratically menaced democracy demand nothing less.