A David Bowie for every mood: From "Space Oddity" to his farewell "Blackstar," Bowie's shape-shifting always felt right 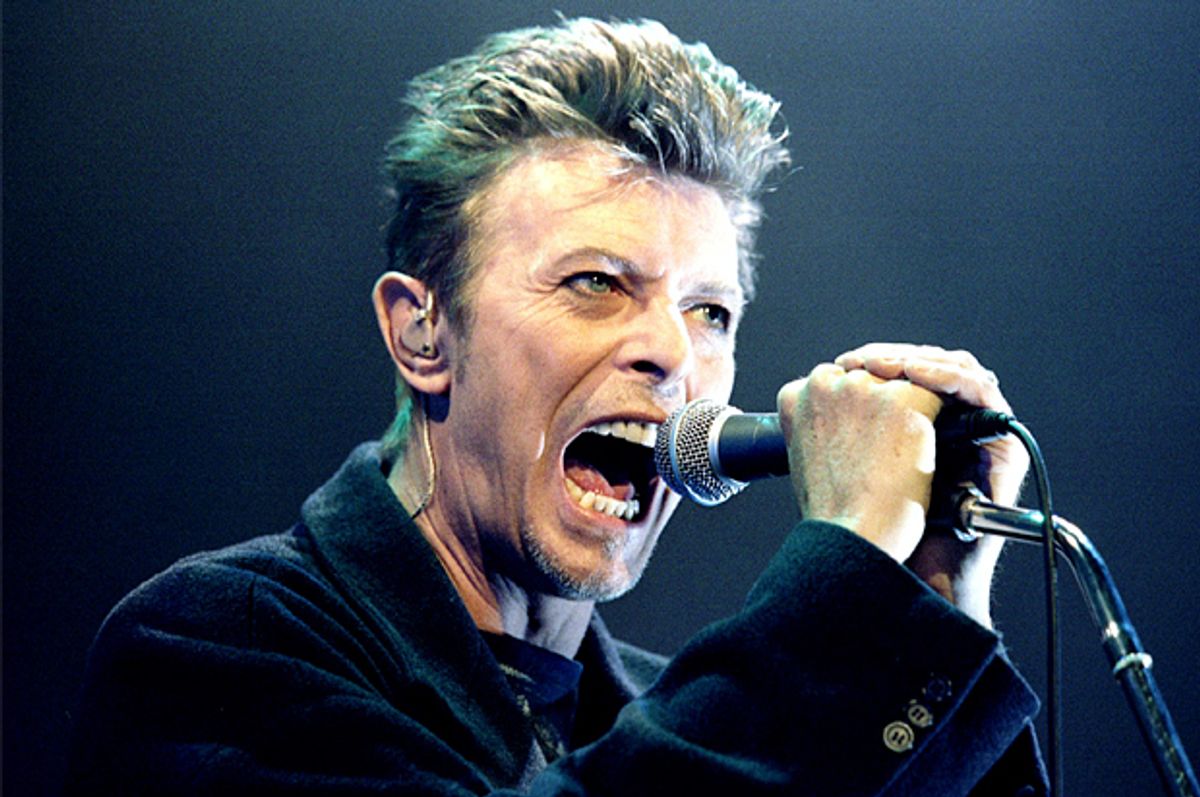 On Monday morning, a message appeared on David Bowie's Facebook page whose circumstances were confirmed by his representative, Steve Martin: "David Bowie died peacefully today surrounded by his family after a courageous 18-month battle with cancer. While many of you will share in this loss, we ask that you respect the family’s privacy during their time of grief." To say the news was unexpected is a wild understatement: Bowie had just turned 69 on Friday, the same day he released a new album, the critically adored "Blackstar." Any feature interviews about the record—with color from long-producer Tony Visconti, or "Blackstar" collaborator Donny McCaslin only, as Bowie hadn't done an interview in years—gave no hint at any health issues. "He'd just go from zero to 60 once we walked out of the control room and into the studio," the album's drummer, Mark Guiliana, told Rolling Stone. "And his vocal performances were always just stunning, amazing."

But Bowie's private battle was very much in line with how he'd lived his life during the last decade. His last concert was in June 2004 and he last performed in public in late 2006, and had retreated to enjoy family life after decades of being in the spotlight. Throughout his career, Bowie the larger-than-life public persona was interchangeable with Bowie the person, sometimes to the detriment of the latter, and so this focus was understandable. Nobody was quite sure if he'd ever tour or perform again, but there was always that small hope that somewhere down the line, he'd reappear suddenly and unexpectedly, grinning and belting out one of his songs. This possibility seemed plausible because despite his public retreat, he wasn't hiding: He filmed a series of artistic videos to go along with songs on "Blackstar," in which he featured prominently, and was heavily involved in shepherding an Off-Broadway play, "Lazarus," which opened in early December. "He's revealed plenty in past interviews, but I think his life now is about his art," Visconti told Rolling Stone. "It's totally about what he's doing now."

Bowie always had a relentless drive to stay contemporary, of course—witness the crisp funk and soul of 1975's "Young Americans," the sleek radio rock of 1983's "Let's Dance" and the frantic electronic experiments found on his '90s albums. But it's more precise to say that he always wanted to challenge what people expected contemporary music to sound like, elevated the popular discourse without being didactic or inaccessible. And if he needed to invent new personas, genres or sounds to get this zeitgeist across? Even better—whatever it took to communicate his ideas in the best, most precise way possible. After all, this immersion into Ziggy Stardust or Thin White Duke (or even Tanned, New Wave Bowie) represented his complete commitment to whatever creative impulse he was pursuing at the time, and signaled to fans and listeners that he was no dilettante.

If anything, Bowie was a masterful artistic shape-shifter who dictated trends—and, more often than not, foreshadowed where music would go—and surrounded himself with collaborators and musicians who could help bring that vision to life. Talking about these accomplishments in the past tense doesn't feel right, however: Despite a few production trend or songwriting missteps, his catalog has always felt vibrant and vital. As the years go by, Bowie's records have continued to reveal more nuances, sonic effects and themes—all of which change and morph depending on a person's age, life situation or even attitude on a particular day. There's a Bowie album for every mood: Someone can rebel along with the alienated glam of "Ziggy Stardust" one day, despair with the morose, greyscale Berlin trilogy on another, dance around the room to "Modern Love" or "Rebel Rebel" or delve into the contemplative, adult ruminations found on fine later-era albums such as "Heathen" and "Reality."

And while plenty of reviews noted the specter of death hanging over the sideways jazz and electronic excursions on "Blackstar," the album's cryptic and sometimes fatalistic lyrics didn't necessarily presage his death. Bowie was never afraid of darkness, either musically or thematically, and identified it both in himself and the world around him. That element most of all is why fans resonated with him: He never viewed darkness, desolation, loneliness or alienation as taboo, or things of which to be ashamed. Bowie gave voice to these elements—and, at varying points in this career, became immersed in them—which made his music a comfort to anyone who felt similarly out of time or in (literal or figurative) outer space. Even "’Heroes,’" a song widely adopted as a triumphant statement, is distinguished by underlying regret and desperation.

Bowie's reality wasn't all bleak, of course—in fact, in new press photos circulating in the release of "Blackstar," he looked exuberant. Still, it's hard now not to see the coded messages contained within the last song on the album, "I Can't Give Everything Away." On the one hand, it reads like a statement on his prolonged absence—"Seeing more and feeling less/Saying no but meaning yes/This is all I ever meant"—but now, in hindsight, it also seems to be a goodbye: The protagonist talks about "skull designs upon my shoes" and repeats, "I can't give everything away." It brings no small comfort that Bowie saw "Blackstar" through to its release, and that it arrived as part of a creative spurt encompassing visual, musical and theatrical achievements.

Visconti posted a message on his Facebook page several hours after Bowie's page did. Of course, Bowie's pal perfectly summed up his essence: "He always did what he wanted to do. And he wanted to do it his way and he wanted to do it the best way. His death was no different from his life - a work of Art. He made Blackstar for us, his parting gift. I knew for a year this was the way it would be. I wasn't, however, prepared for it. He was an extraordinary man, full of love and life. He will always be with us. For now, it is appropriate to cry." Thanks, Tony. I'll follow your lead, especially on the last part.