David Bowie belonged to everyone: His rare appeal cut across generational and demographic lines

Baby Boomer or Gen Xer, classic rock fan or indie rock stalwart -- Bowie was all over the place [Update] 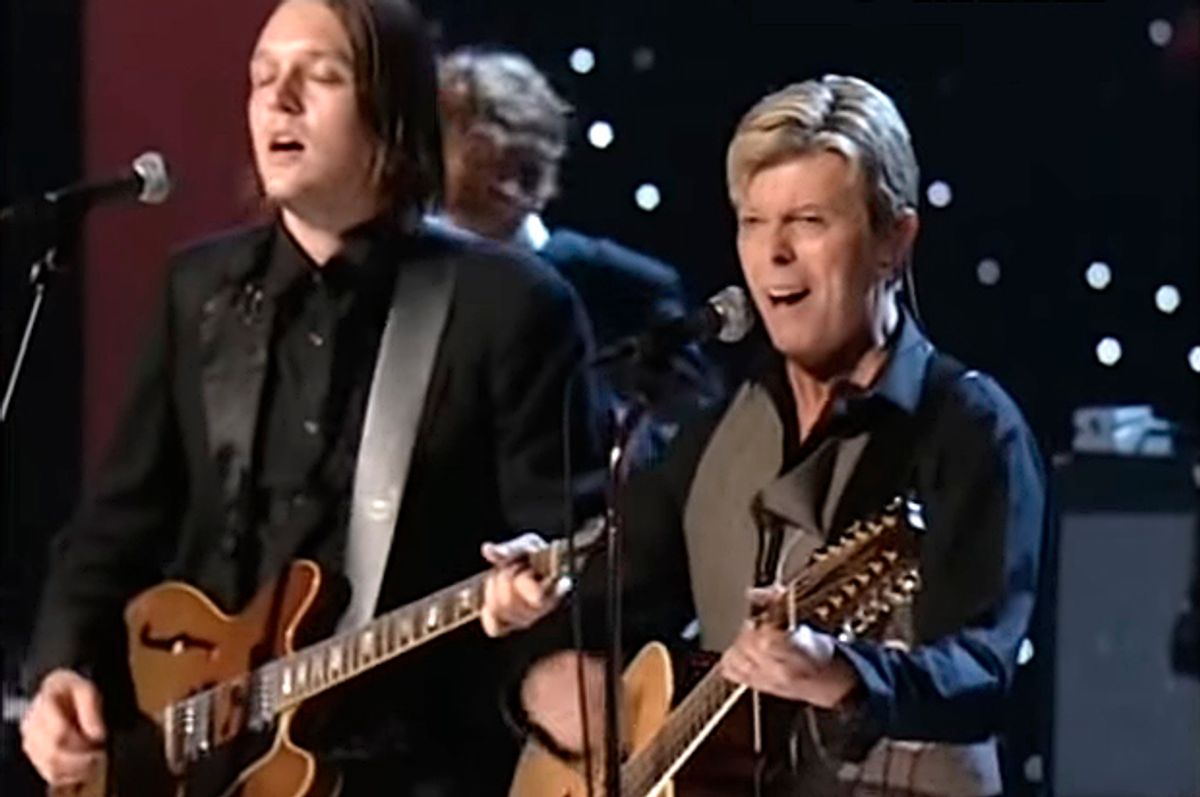 A lot of us are still in shock. David Bowie’s death resonates in so many directions – music, fashion, sexuality, art, film, science fiction. Part of what’s different about Bowie, besides the huge range of his achievement and influence, is that like only a very few pop musicians, he never seemed to remain in any one generation. Bowie was a Boomer – born in 1947 – but you could pick a fight with a Generation X musician or fan by knocking him. He was a creature of the classic-rock era with a handful of overplayed songs, but he also intrigued alt and indie rockers.

There was a sense that he belonged to everyone.

I got to see this firsthand. I was once nearly thrown out of a friend’s party in Los Angeles one day when I spoke about Bowie as someone who'd peaked in the ‘70s and never really gotten better than his Ziggy Stardust/ Aladdin Sane glam phase. (I was sort of kidding.) While it may be true that Bowie now seems like the artist of the ‘70s in a way that Prince was the artist of the ‘80s, Bowie morphed successfully – Bob Dylan and Madonna would be maybe his only two rivals on this one, unless you count Miles Davis – and continued to surprise us. The new “Blackstar,” as well as “The Next Day” from 2013, are justly celebrated as his strongest albums in decades. It may be a cliché to say when an artist dies that “their best work seemed to be ahead of them.” But Bowie, who was 69, was certainly experiencing an Indian summer of the kind Dylan or Philip Roth have gone through. Because he was all embracing – Roxy-ish glam, funk, Eno-ish sonic experimentation, jazz -- a lot was still possible.

There are some specific younger figures who were inspired by Bowie. Lady Gaga, for instance, is a simplified version of the Bowie art-pop crossover. Justin Timberlake clearly drawn from Bowie’s ‘80s dandy style. Arcade Fire played with him. Airborne Toxic Event have been tweeting about him.

Musically, it was probably the “Berlin records” Bowie made with Brian Eno that most inspire Xers. The Beatles, Dylan, Stones and others have their followings among power pop bands, singer-songwriters, alt country bands, and so on. With the records “Low,” “Lodger,” and “'Heroes'” – a double set of quotes on that last one, as colleague Andrew O’Hehir has reminded me – Bowie helped transform the way music sounded, in a way that would shape numerous alt and indie rock bands.

Alt and indie rockers who came of age in the ‘80s – Bob Mould of Hüsker Dü, The Feelies, who covered “Fame” – were fans.

And the bands here – Adam Lambert, Paul Weller – are all over the place.

One of Gen X’s defining filmmakers, Noah Baumbach, has used Bowie’s songs in his films. Ken Stringfellow of ‘90s alt rockers The Posies just posted on Facebook the set list from “the amazing Bowie show I saw at the Paramount in Seattle 1997.” Suede and Blur are hard to imagine without Bowie. The gender-bending cabaret-meets-Gary Numan spirit of the early Magnetic Fields came from Bowie as well. Here what Stephin Merritt told Salon via email:

I got a little flak for writing in OUT magazine that Bowie was more important (weasel words: "in a way") than the gay rights movement. But for my tiny generation (I was twelve when Low came out), sex itself was less important than Bowie. And it wasn't just the clothes; Low is half "too fast" two-minute abstract pop songs, half "too slow" Mellotron mood pieces, embodying an identity exploration that coolly transcended not only gender, race and nationality (it's British people making Krautrock in Paris) but the human relationship to musical tempo (what had been called "danceability"). He made the fragile social construction of identity into a masquerade party, one where the other guests are not necessarily human, and that's okay too.

As one friend wrote on Facebook- "this is that day where we find out that David Bowie died." I've spent a lot of my life thinking about how I would feel on this day. Although I did not know him, I do feel different with him gone. I am sad that he is now part of the musical past. I feel like there's a disconnection now, perhaps, to myself. That I will never be able to explain my feelings about him and his music to my daughter, without sounding like a jaded old hippie. But, as dear George Harrison said, "all things must pass."

One of the bands that absorbed Bowie’s Sonic experimentation was Built to Spill; leader Doug Martsch sings in the song “Distopian Dream Girl”: “My stepfather looks just like David Bowie/ But he hates David Bowie. I think Bowie’s cool/ I think ‘Lodger’ rules/ I think my stepdad’s a fool.”

Neil Young, of course, was a hero of the “classic rock” era who inspired Gen Xers (including Built to Spill) with his grunge phase. Young is a titanic musician and influence, as is the Boomer god Richard Thompson, whose melancholy songwriting (and general brilliance) has aligned him with a Xer following. But Bowie had other sides that make him very different and in some ways more complicated than even those two titans: His relationship to black music and black musicians, his gender-bending, his acting. Bowie could be so good that it was hard not to be deeply disappointed when he didn’t put out great work. But he kept surprising us, all the way to what seems to most of the world like his sudden death. Bowie is harder to define than just about any pop or rock musician since the Beatles, and it’s impossible, in the rush of emotion unleashed by his death, to really explain him.