Imploding the GOP: Republican convention is destined for chaos, and that's exactly what Democrats want 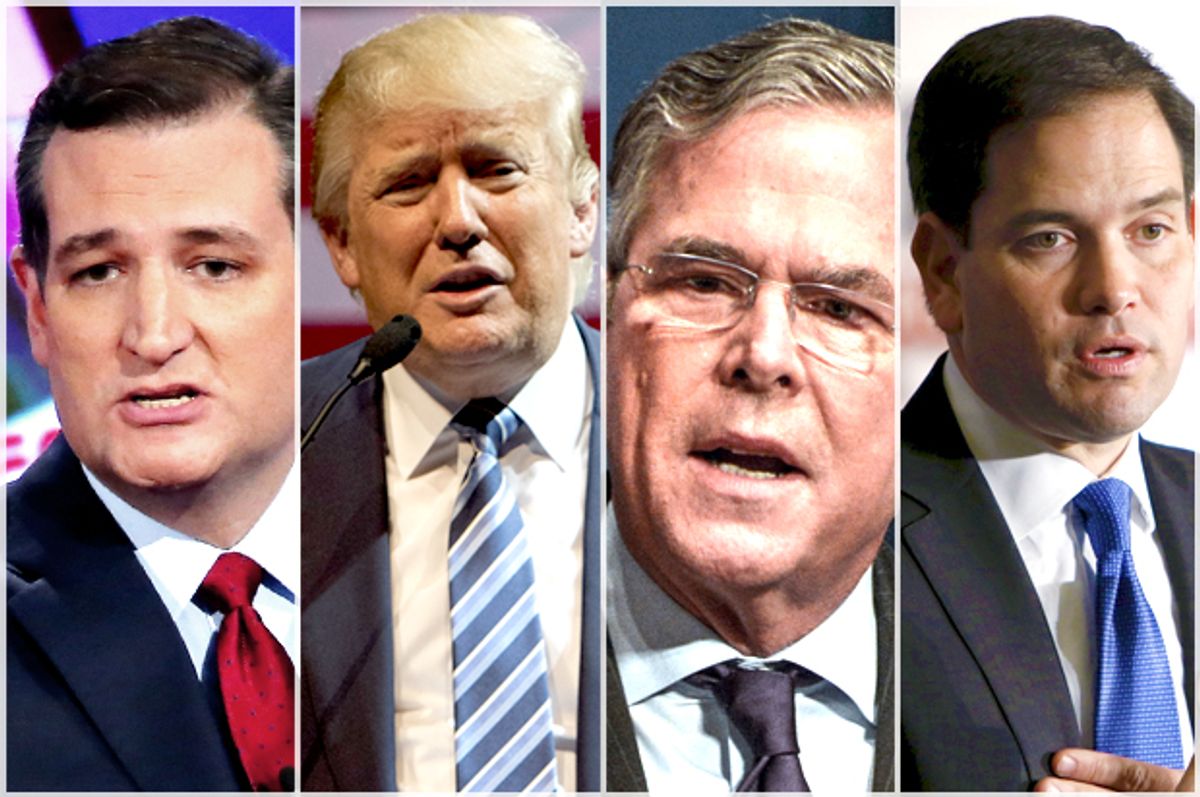 Well, if you're a Republican, Karl Rove has some bad news.

The Republican operative wrote in the Wall Street Journal last week that “The GOP will hold its first multiballot convention since 1948. Delegates will be fractured – with many legally bound, for at least one ballot, to support the winner of their state or district – and at least two ballots will be required. But the candidate with the most delegates going in will win.”

A brokered convention was already a distinct possibility: The GOP has the largest field of contenders in history; the establishment has yet to coalesce around a candidate; and the so-called outsider candidates (Trump, Cruz, and Carson) have dominated the race for the last several months. And there are numerous candidates who have the money and the organizational prowess to continue running well past Iowa.

Even more problematic is the GOP's process for rewarding delegates. Because there are a sufficient number of early primary states that award delegates on a proportional basis, it's not at all unlikely that three or more candidates end up separated by a few delegates. If that happens, the leader would have a plurality of delegates, but not a majority.

As it stands, Trump and Cruz are the most likely winners, which, again, is very bad news for Republicans. Rove writes:

“If Mr. Trump is its standard-bearer, the GOP will lose the White House and the Senate, and its majority in the House will fall dramatically. If the nominee is Ted Cruz the situation is still dicey. Any of the other major candidates, if nominated, will best Mrs. Clinton in a close race and help the GOP narrowly keep the Senate.”

Rove is right about Trump – his nomination would be an utter disaster for the party. Republicans would lose the general election in a landslide (as the latest Qunnipiac poll suggests), along with their majorities in Congress. Rove offers a glimmer of hope, though. “If the GOP contest narrows to two or three candidates by March 15,” he writes, “Mr. Trump will not be the party's nominee. If on the Ides of March someone wins both the winner-take-all primaries in Florida (by congressional district) and Ohio (statewide), that person will be the nominee.” However, despite Rove's muted optimism, Trump is still best positioned to win. He's leading Cruz in several key primary states (including Florida) and, as I wrote last week, Trump's Republican coalition is far bigger than the pundits imagined. Stopping or containing him might be an impossible task for party leaders.

Cruz would be more competitive in a general election (he's essentially tied with Clinton and Sanders in head-to-head surveys), but much of the country remains oblivious to the campaign. Clinton is a known commodity; Ted Cruz isn't. When people start paying attention, Cruz's numbers are likely to drop. His blend of populism and religious demagougery will alienate moderates and indpendents, and that will make it difficult to beat any of the Democrats in a national election.

In any case, the Republicans are likely to enter the convention without any of the candidates having locked up the nomination. It's impossible to know how that would end, but it's hard to imagine it ending well. If party elites try to force an establishment candidate down the throats of the base, they'll stay home in November. And if Trump or Cruz prevail, against the wishes of the establishment, the GOP is still in big trouble.

In other words, things are looking rather encouraging for the Democrats in 2016.