David Bowie dead at 69: "I've only really worked with the same subject matter ... isolation, abandonment, fear and anxiety — all of the high points of one's life"

Days after releasing an album on his birthday, the music superstar dies of cancer 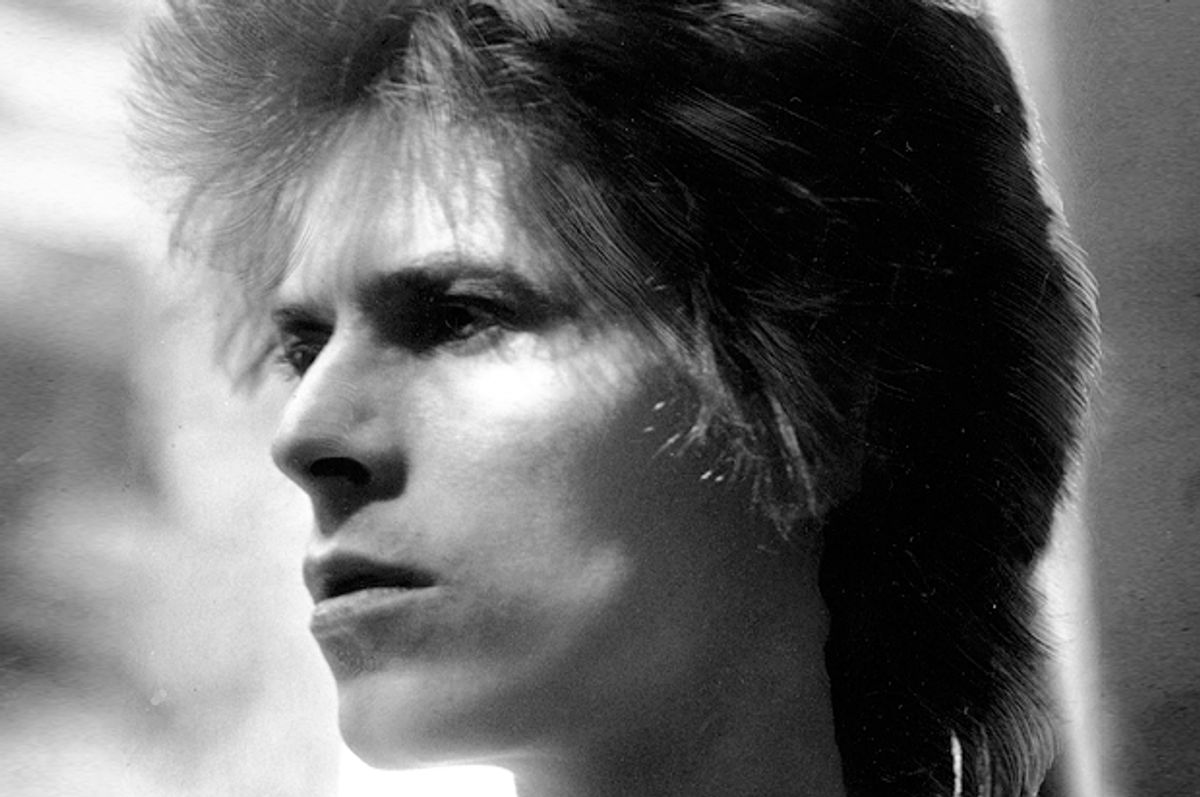 David Bowie, the other-worldly musician who broke pop and rock boundaries with his creative musicianship, nonconformity, striking visuals and a genre-spanning persona he christened Ziggy Stardust, died of cancer Sunday. He was 69 and had just released a new album.

Long before alter egos and wild outfits became commonplace in pop, Bowie set the music world on its ear with the release of the 1972 album, "The Rise of Ziggy Stardust and Spiders from Mars," which introduced one of music's most famous personas. Ziggy Stardust was a concept album that imagined a genre-bending rock star from outer space trying to make his way in the music world. The persona — the red-headed, eyeliner wearing Stardust — would become an enduring part of his legacy, and a touchstone for the way entertainers packaged themselves for years to come.

Bowie turned 69 on Friday, the same day as he released a new album called "Blackstar."
"While many of you will share in this loss, we ask that you respect the family's privacy during their time of grief," said a statement issued via his social media accounts. No more details were provided.

The singer, who was born David Jones in London, came of age in the glam rock era of the early 1970s. He had a striking androgynous look in his early days and was known for changing his appearance and sounds. After Ziggy Stardust, the stuttering rock sound of "Changes" gave way to the disco soul of "Young Americans," co-written with John Lennon, to a droning collaboration with Brian Eno in Berlin that produced "Heroes."

He had some of his biggest successes in the early 1980s with the bombastic "Let's Dance," and a massive American tour. Another one of his definitive songs was "Under Pressure," which he recorded with Queen; Vanilla Ice would years later infamously use the song's hook for his much maligned smash "Ice Ice Baby."

"My entire career, I've only really worked with the same subject matter," Bowie told The Associated Press in a 2002 interview. "The trousers may change, but the actual words and subjects I've always chosen to write with are things to do with isolation, abandonment, fear and anxiety — all of the high points of one's life."

At a concert for rescue workers after the 2001 World Trade Center attacks, his performance of "Heroes" was a highlight.

"What I'm most proud of is that I can't help but notice that I've affected the vocabulary of pop music. For me, frankly, as an artist, that's the most satisfying thing for the ego."

Bowie was inducted into the Rock and Roll Hall of Fame in 1996, but he didn't attend the ceremony. Madonna, another artist who knew something about changing styles to stay ahead of the curve, accepted for him and recounted how a Bowie concert changed her life when she attended it as a teenager. David Byrne, of the art rockers Talking Heads, inducted Bowie and said he gave rock music a necessary shot in the arm.

"Like all rock 'n' roll, it was visionary, it was tasteless, it was glamorous, it was perverse, it was fun, it was crass, it was sexy and it was confusing," Byrne said.

Bowie kept a low profile in recent years after reportedly suffering a heart attack in the 2000s. He made a moody album three years ago called "The Next Day" — his first recording in a decade which was made in secret in New York City. "Blackstar," which earned positive reviews from critics, represented yet another stylistic shift, as he gathered jazz players to join him.

He released a music video on Friday for the new song "Lazarus," which shows a frail Bowie lying in bed and singing the track's lyrics. The song begins with the line: "Look up here, I'm in heaven."

Tributes poured in for the singer after the announcement of his death. British astronaut Tim Peake tweeted about his sadness from outer space aboard the International Space Station, saying "his music was an inspiration to many."

British Prime Minister David Cameron tweeted that Bowie's death is "a huge loss." He wrote he had grown up listening to and watching Bowie and called the singer a "master of reinvention" and a pop genius who kept on getting it right.

Kanye West said on Twitter that Bowie "was one of my most important inspirations, so fearless, so creative, he gave us magic for a lifetime."

Bowie felt uneasy about some of his greatest material, once embarking on a "greatest hits" tour saying it would be the last time performing much of his old material. He later relented, however.

"I'm not a natural performer," he said in the 2002 interview. "I don't enjoy performing terribly much. Never have. I can do it and, if my mind's on the situation, do it quite well. But five or six shows in, I'm dying to get off the road and go back into the studio."

Bowie was married twice, to the actress and model Mary Angela "Angie" Barnett from 1970-80, and to international supermodel Iman since 1992. He had two children — Duncan Jones and Alexandria Zahra Jones — one with each wife.