At an event over the weekend, Bush illustrated what everyone should by now know: The GOP has no ideas 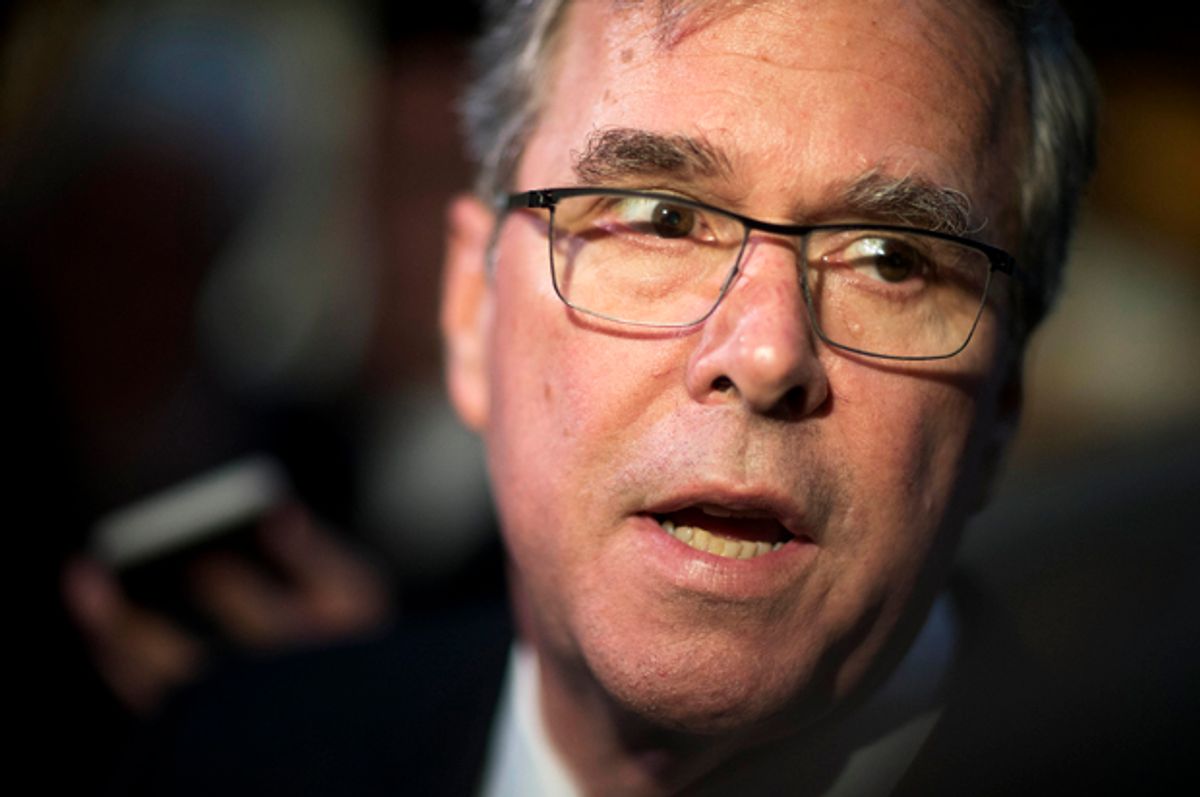 This weekend, a few of the Republican candidates for president gathered at the Jack Kemp Foundation to discuss which one of their administrations would screw over poor people the hardest.

Naturally, because they are still pretending that there might be a market among their base for sober rhetoric and competent policy ideas, the candidates, along with the forum’s moderators, Speaker of the House Paul Ryan and Sen. Tim Scott of South Carolina, could not come right out and say their welfare reforms would screw over poor people. Instead there was a lot of talk about the miracles the private sector will bring about if we just give businesses tax breaks and enterprise zones. There was the usual pablum about cutting government programs and assuming religious charities will pick up the slack. There were the usual conservative buzzwords for fighting poverty: empowerment, education (by providing school vouchers, of course), expanding opportunity.

Trying to get a jump on his competition, Jeb Bush announced his plan for overhauling welfare just before he arrived at the forum. His proposals include ending the Supplemental Nutrition Assistance Program (SNAP), more commonly known as food stamps. Bush would take the money the federal government spends on SNAP and send it to the states in the form of block grants, which in theory allows state governments to spend the money more efficiently by designing programs tailored to meet the unique needs of their populations. In practice there is evidence to suggest that this approach won’t work, but it sounds good to conservatives whose ears bleed at the very mention of the federal government doing anything besides bombing other countries.

A quick survey of what little press attention Bush’s proposals garnered indicates they landed like a lead balloon. There are a variety of likely reasons for this.

For starters, Bush’s campaign has felt inert for months. He has never been an exciting candidate, but watching him these days as he struggles along with his national polling average hovering around six percent and his eyes so dead and lifeless that this guy could be talking about him, is just excruciating. Bush himself has been touchy about his situation, saying a few weeks ago that he likes not being the frontrunner and appearing so diffident as to whether or not he still has a shot at the nomination that I assume his advisors start every morning by hooking him up to an EKG and making sure his heart is still beating.

Another reason his proposals have barely been noticed: Talking about poverty is so boring. Doing so might require the national press to analyze Bush’s proposals on their merits. It might require the voters to try to differentiate Bush’s plans from those of the other GOP candidates, to say nothing of the Democratic candidates’ poverty-fighting ideas. It would require voters to decide fighting poverty is important, and maybe they should thinking about which candidate would be best qualified to do so.

But who wants to spend time on such an endeavor when Donald Trump is spewing some new lunacy every three minutes? Who cares about 46 million poor Americans when the very important question of whether or not Ted Cruz’s Canadian birth disqualifies him from the presidency is allegedly unsettled because a walking tangerine topped by a head of hair like a swirl of butterscotch suggesting this to be the case?

Let’s face it, we’re not exactly seeing an issues-focused campaign this cycle.

But the main reason I suspect Bush’s plans will get so little attention is because of what I said earlier about the poverty-fighting talk at the Kemp Foundation this weekend being the same old conservative talking points. There is simply nothing new here. Bush himself was pushing to end programs like SNAP back when he was the governor of Florida 20 years ago, even before Bill Clinton signed onto gutting welfare programs in 1996. He’s not even going to nod to the “compassionate conservatism” of his brother.

(Though in fairness, if George W. Bush tried running that campaign in 2016, the GOP base would slap him with the “RINO” label and Ted Cruz would be calling him a liberal squish.)

In place of new thinking on how to solve an old and intractable problem, what we have is a bunch of ideas repackaged and sold as the rejoinder to the popular cheap shot of calling President Obama “the food stamp president” due to the millions who have been added to the welfare rolls during his presidency. That these people became welfare cases due to the Great Recession that prior administrations gifted Obama is of course beside the point, as is the fact that programs like SNAP and Temporary Assistance to Needy Families (TANF) are designed to scale up to help more people during tough economic times, and then to scale back down when the economy improves. Cutting them out completely would end the already precarious hold so many have on even a meager existence, no matter how fast the states turned the block grants into programs that got money for food into peoples’ mouths.

Modern conservatism is simply devoid of new ideas, and the modern conservative movement has reached the end of its usefulness (if it had any to begin with) as a vehicle for fighting a problem like widespread poverty. We’re past even Mitt Romney’s comments in 2012 that he wasn’t “concerned about the very poor.” This year’s Republican candidates are bypassing Romney’s indifference and going straight for outright hostility. Maybe Jeb Bush could redeem himself by dropping out of the race, taking that $100 million he’s raised for his dead campaign, and donating it to helping feed the poor. They’re going to need it if a Republican wins the White House in November.