"Joy," the neoliberal fairy tale: Not even populist princess Jennifer Lawrence could redeem the movie's toxic brand of lone-wolf feminism 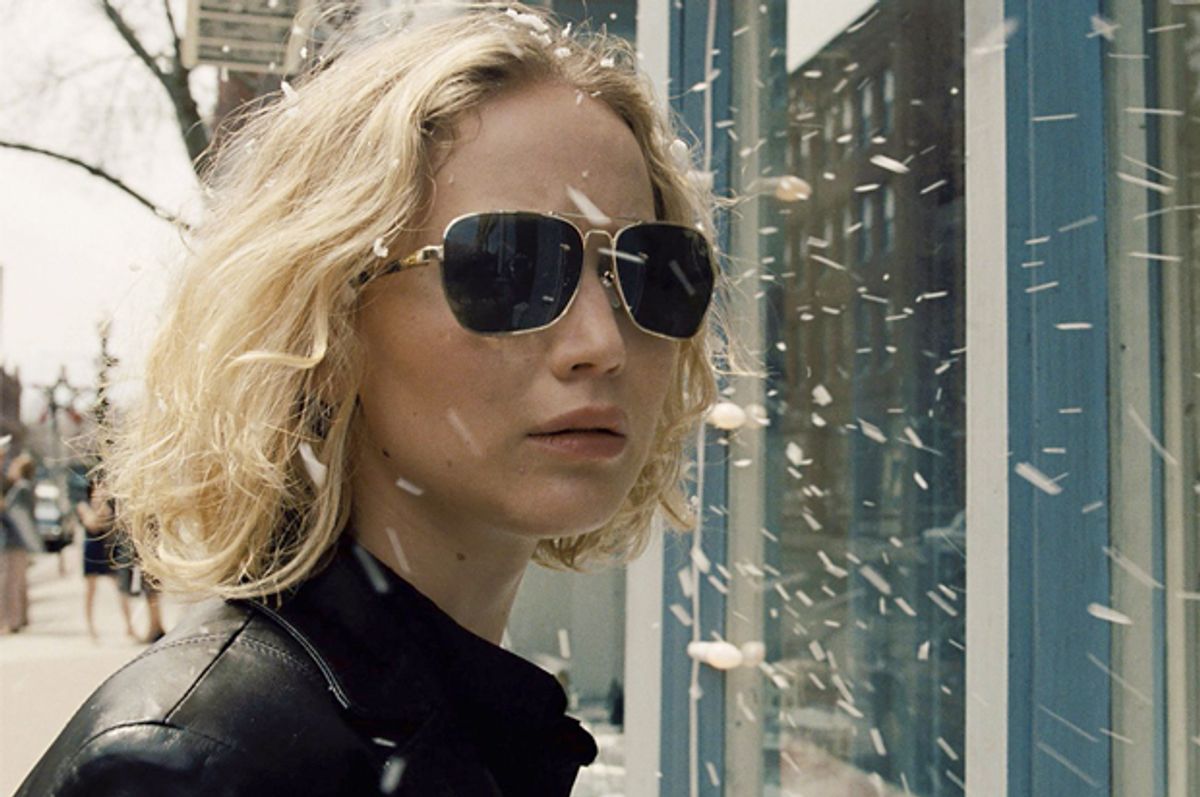 “Don't ever think that the world owes you anything, because it doesn't. The world doesn't owe you a thing.” — "Joy”

In a time of competing populist impulses currently dominating and dividing our country, box office hits “Joy” and “The Big Short” reflect two sides to the same spinning coin: trust that the market may yet still save us, and fear that it will prove our undoing. Starring Jennifer Lawrence, who won a Golden Globe last night for her performance as real-life matriarch Joy Mangano, “Joy” was released on Christmas Day, but would make just as much sense on Black Friday, so sparkling are its dreams of upward mobility via QVC deliverance. “We got here from hard work, patience and humility,” Joy tells her daughter Christie, warning that “a lot of times people get nice things and they start to think differently.” Clearly, they also got there through a series of serendipitous connections and sheer luck, but that’s not the movie’s point. The all-too-familiar point is that if you’re a Good Person, with smarts, drive, and a clear complexion, you too can live the American Dream, you too can ascend the Miracle-Mopped stairway of the 1 percent.

Praised as a “story of loyalty, love and deeply-entrenched personal values,” David O. Russell’s rags-to-riches tale is certainly seductive, but in today’s climate of swelling consumer debt and income inequality, this neoliberal fairy tale can feel downright bogus. For the first time in many decades, middle-class Americans now comprise less than half the population, and in such a context, “Joy” seems less, well, joyous, than placating late-2015 anxieties and our polarized zeitgeist of Trump vs. Sanders. The same day Santa gifts goodies to the good, “Joy” creatively recasts our myth of meritocracy while masquerading as feminist fable, one grounded in the gritty pluck for which J-Law has long been lauded.

It is here that Lawrence is at once miscast and perfectly cast. As an actor, she’s at least a decade too young to play Joy (as she was at least a decade too young in “American Hustle,” another Russell dramedy exalting entrepreneurial renegades), and was born the same year that the real Mangano first developed the Miracle Mop in 1990. That’s right, 1990: so she was a tot through the economic salad days of the Clinton era, and barely old enough to vote when the market tanked in 2008. But combine her girl-next-door ebullience with a low-octave chest voice and seen-worse glint in her deep-set eyes, and not many viewers care—or even notice—how young she truly is. Lawrence is among few her age who can carry both a box-office smash and prestige film through persona alone, and it is for this exact reason that it’s harder to see past Joy’s girl-power appeal to its bottom-line conservatism.

In “How Feminism Became Capitalism’s Handmaiden—and How to Reclaim It,” political philosopher Nancy Fraser sends up our culture’s valuation of female empowerment in solely fiscal terms. “[T]he movement for women's liberation has become entangled in a dangerous liaison with neoliberal efforts to build a free-market society…. Where feminists once criticized a society that promoted careerism, they now advise women to ‘lean in’. A movement that once prioritized social solidarity now celebrates female entrepreneurs.” Cut to Joy shilling her mops for the first time on TV, QVC executive Neil Walker (a glutinous Bradley Cooper) shouting, “It’s about the hands! The hands!” A more literal incarnation of Fraser’s title could hardly be conceived.

Considering Russell’s recent creative output, this implicit conservatism makes sense. According to Andrew O’Hehir, the director has “deliberately avoided pushing his stories beyond certain parameters, into ambitious or confrontational territory.” As in his two past holiday hits, “You get the feeling he believes he has worked out the precise dimensions of the mainstream audience’s comfort zone.” And at the epicenter of said snuggy space? High-risk venture capitalism! The market will save us! Or at least, the market will bring us Joy, and more joy after that, happiness but a suburban mansion and a blonde French twist, an ageless Lawrence signing over loans to innovative common folk.

Coaching an expectant couple on the patent process, Joy’s conspicuous lack of self-interestedness would seem to be her character’s saving grace, falling into a signature pattern for Lawrence’s heroine trope. As self-made matriarch time and again, the actor uniquely excels in roles conflating nurturing with extreme, nearly pathological self-sacrifice. Even the titles of “Winter’s Bone” and “Hunger Games” belie the threat of deprivation at stake on her quests, “Silver Linings” and “Joy” their nominal antidotes. But both her hearty scrappetite for a Better Life and won't-take-no-for-an-answer stare are typically put in service of a greater good, her knack for navigating moral (and physical) labyrinths less about individual conquest than (again often literally) saving the village. Whether rescuing her family from homelessness as Ree Dolly, volunteering as a tribute as Katniss Everdeen, or battling corrupt businessmen as Joy Mangano, this princess is bound to deliver us from evil—or poverty, whichever’s worse.

The problem with this pattern in “Joy” is how closely salvation is yoked to an Eastwood-like DIY justice, as in the film’s final act in which Lawrence confronts a corrupt manufacturing tyrant. Of course the best spot for any standoff would be The Lone Star state, and that’s exactly where Joy squares off with a laconic tycoon in a cowboy hat. And of course, Joy is ahead of the game and deftly exposes his fraudulent schemes, her newly shorn hair and unyielding stance casting imposing shadows on the motel walls. Outside it’s a ghost town, also appropriate for the neo-Western, every-man-for-himself ethos pervading the film. In an earlier scene, after finding out she might lose her home, Joy suddenly grabs a neighbor’s rifle and shoots a couple rounds, all to Elvis’s rumbling “Satisfaction.” A little less conversation, a little more action indeed.

Let me be the first to admit: I was an early Lawrence acolyte. From the moment in “Winter’s Bone” when she spits, “Why don’t you just kill me…” to a coven of scary Ozark kidnappers, you could call me smitten with her tough-girl mix of fortitude and moxie. As Katniss, Lawrence transcends gender limits for millions of viewers worldwide, inspiring both girls and boys as a pillar of strength. But in “Joy,” such tenacity buttresses a myth we know too well: In a world that doesn’t owe you a thing, you’ve no one to blame but yourself if you’re part of the rising demographic that can’t put food on the table, who can’t take a week’s vacation or can’t send her kids to college without refinancing her home.

“Joy” may be based on a true story, but this story is undeniably the exception that proves the rule. For every Mangano building an empire out of “huggable hangers,” there are thousands more mothers declaring bankruptcy because of divorce, medical expenses, or a business, that unlike Joy’s, can’t be rescued at the eleventh hour. But Americans don’t like to tell these stories, and we certainly don’t like to watch them unravel onscreen on Christmas Day. J-Law may not be old enough to remember when Newt Gingrich’s “Contract with America” waged war on welfare, and as the highest-paid actress today, she could hardly be expected to be critical of the film’s agenda; in this way, her mix of youth and riches makes her the ideal American poster child in a time of great political divide.

As Fraser puts it, “The current crisis affords the chance to pick up [feminism’s] thread once more, reconnecting the dream of women's liberation with the vision of a solidary society.” That is, if liberty be only through the market, it is safe to say that women (and men) can’t ever fully be free, our hard-won happiness as spurious as the flurry of fake snow floating over Lawrence’s radiant face.