In the era of "just say no," Ronnie's anti-drug campaign recruited a mixed bag of performers. Gene Simmons, anyone? 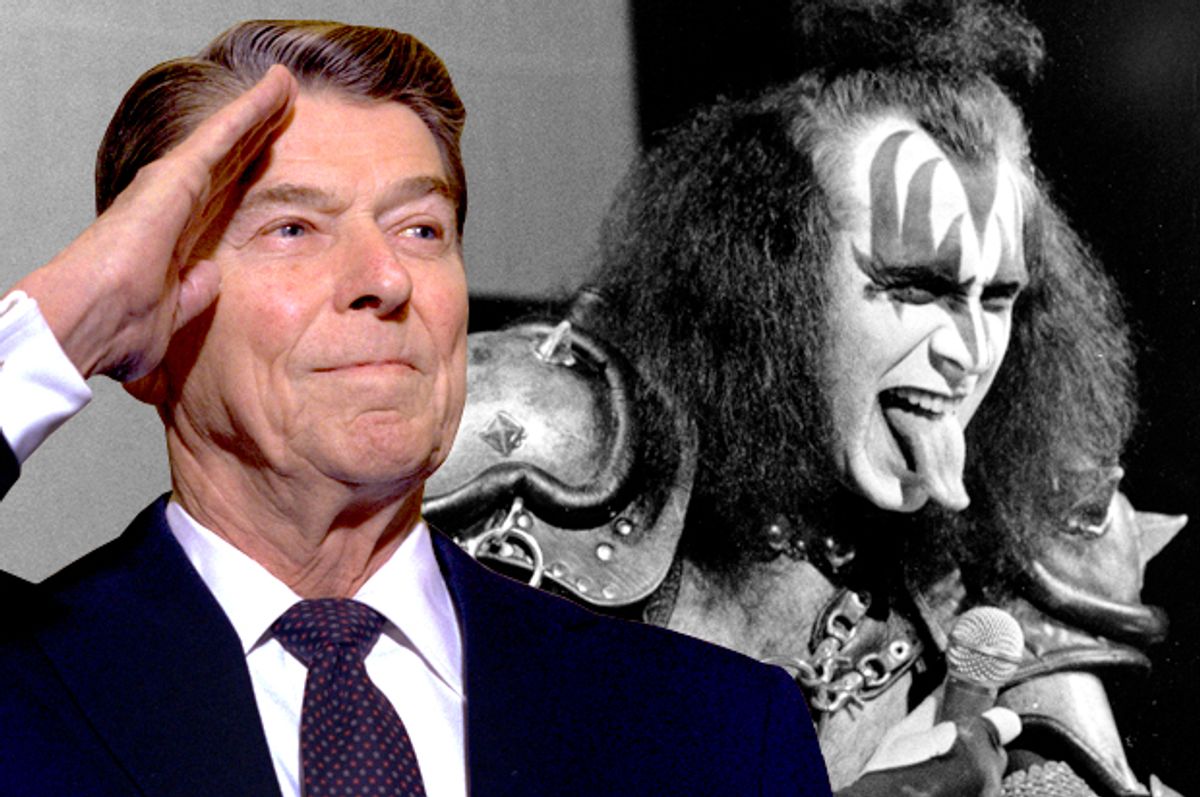 Rock 'n' roll without drugs is like country music without whiskey. The two go hand in hand, and have from the beginning. In the 1960s and '70s, dope-inflected rock and rockers were legion, from the acid-tinged psychedelia of West Coast rock to the amphetamine- and heroin-fueled drone of the Velvet Underground.

But the 1980s brought the dark night of Ronald Reagan, and there was no place for such louche hedonism in Ronnie's world. Reagan intensified Richard Nixon's vote-winning war on drugs, and even opened up new battlefronts, including forays behind enemy lines in the culture wars.

As Nancy Reagan was encouraging everyone—especially the youth—to just say no to drugs, there was a campaign to recruit rockers (or reasonable facsimiles thereof) to record anti-drug videos, which were played relentlessly as PSAs on MTV, which back then actually played music videos. That campaign, by record company executives, was a direct response to direct criticism of the music industry by the president and Mrs. Reagan.

This was Rock Against Drugs, aiming to use the hipness of rockers to discourage their young fans from going down the slippery slope to drugged out doom. Except some of the rockers weren't so hip (Kiss' Gene Simmons), others were hardly known (Redd Kross' Jeff McDonald), and some were just obnoxious (Ted Nugent, and Gene Simmons probably deserves a mention here, too).

Thanks to an obscure (5,047 YouTube views)  seven-minute montage of vintage PSAs, at times so weird you wonder if the rockers weren't on drugs when they made them, we can now get a taste of the anti-drug propaganda blasting the teenyboppers back in the late '80s. See Gene Simmons ham it up with monster make-up (surprise)! See Missing Persons' Patrick O'Hearn channel Luis Bunuel in a trippy bit involving a shirtless man in a cocoon in the desert. See Cinderalla backstage in sunglasses talking about how they don't need drugs. And see all that '80s hair.

It's not all just silly and stupid. Aimee Mann is forthright and earnest, and former Sex Pistols guitarist Steve Jones, shown polishing his motorcycle, probably has the most effective pitch: “A good friend of mine, Sid Vicious, died from drugs. I nearly died from drugs. Drugs suck.”

Of course, efforts like Rock Against Drug generated ridicule and criticism. Comedian Sam Kinison commented, "Rock Against Drugs. What a name. Somebody was high when they came up with that title. It's like Christians Against Christ." But no one was more withering than  contemporary Texas comedian Bill Hicks. All those great albums you loved were made by musicians who were "re-a-a-a-a-al high," he noted. "And these other musicians today who don't do drugs, in fact speak out against them, boy, do they suck!"