Sean Penn's repellent ode to El Chapo: Why his Rolling Stone interview was even worse than you've heard

Virtually nothing about Penn's Q&A with the drug kingpin passes the smell test. How on earth did it get published? 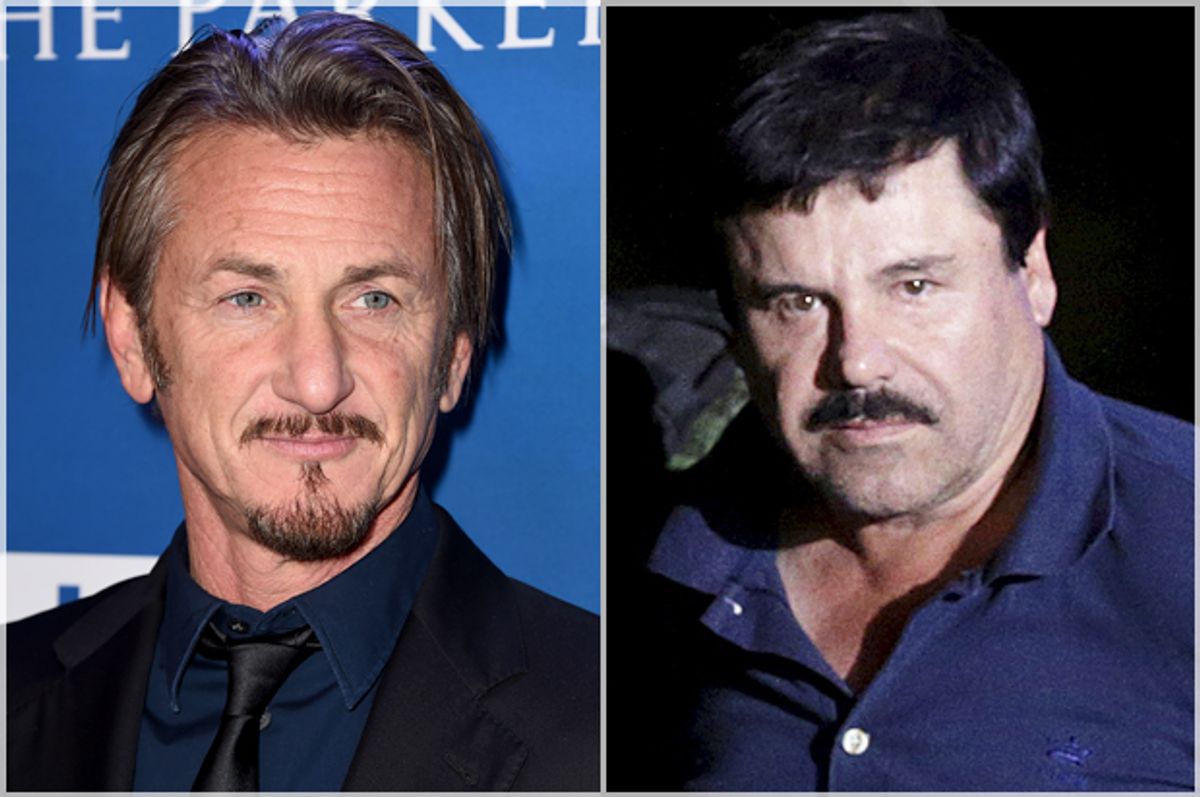 On Saturday, Rolling Stone published the kind of scoop that would be the envy of every news outlet in the world: an exclusive interview with notorious Mexican drug lord Joaquín "El Chapo" Guzmán. In a twist of timing seemingly granted from the heavens, the interview landed the day after El Chapo—who made a fantastical escape from his prison cell in July and had been on the lam ever since—was recaptured by Mexican forces. All of that would have been enough to capture the world's attention, but the magazine had an even more surreal ace up its sleeve. The interview was conducted by actor Sean Penn, who traveled—with, it turns out, the eyes of the Mexican government following him the entire way—to meet with El Chapo in a Mexican jungle last October. Penn is a...unique choice for a story like this, but El Chapo wanted to talk to him, and a scoop is a scoop. You could practically feel Rolling Stone's gloating emanating from the screen.

Unfortunately for Rolling Stone, virtually everything about the story it published reeks. Let's leave aside the very real ethical problems embedded in the article for a second. (They'll show up later, promise!) Even if every journalism professor in the world gave Penn's methods an A+ and taught them to their students, we'd still be left with the article itself, and that is a big enough problem.

First off, for a piece framed around an exclusive interview, it takes a stupefyingly long time, as Penn journeys to El Chapo, to get to that interview—roughly 8,900 words, by my unscientific count. The drug lord's actual statements take up a tiny portion of the piece. It quickly becomes clear that Penn, not El Chapo, is the real subject of the story.  "Self-indulgent" does not begin to describe what is going on. He introduces his own penis as a character four paragraphs before we even meet El Chapo.

Then, there is the actual writing. Penn is the kind of writer who would rather use the term "minor traveler's flatulence" than "fart." (The former is a real phrase from the article.) Most editors, spotting that level of linguistic decadence, would hastily move to stamp it out, but the team at Rolling Stone appears to have let Penn do approximately whatever he wanted. Here is one typically meandering passage:

I tell [El Chapo] that I understood that in the mainstream narrative of narcos, the undersung hypocrisy is in the complicity of buyers. I could not sell him on a bait-and-switch, and I knew that in the writing of any piece, my only genuine cards to play were to expose myself as one fascinated and willing to suspend judgment. I understood that whatever else might be said of him, it was clear to me he was not a tourist in our big world.

If anyone can give a good reason for any of the above to have ever been published in a prominent magazine, it would be nice to hear it.

But back to those ethical concerns. At the top of the article, we are told this:

[A]n understanding was brokered with the subject that this piece would be submitted for the subject’s approval before publication. The subject did not ask for any changes.

Not to get all j-school prissy or whatever, but seriously: Granting any subject—let alone an infamous drug trafficker—approval over your piece should be anathema to any journalist (or, in Penn's case, anyone indulging in journalism for a spell). It should certainly have given Rolling Stone pause. Here is how the magazine's impresario, Jann Wenner, handled the issue in an interview with the New York Times:

As for giving Mr. Guzmán final approval over the article, Mr. Wenner said: “I don’t think it was a meaningful thing in the first place. We have let people in the past approve their quotes in interviews.”

Mr. Guzmán, he said, did not speak English and seemed to have little interest in editing Mr. Penn’s work. “In this case, it was a small thing to do in exchange for what we got,” Mr. Wenner said.

The possibility that the world's most wanted drug kingpin may have an English speaker on staff seems not to have occurred to Wenner. The possibility that no changes were requested precisely because El Chapo liked what he read seems not to have crossed his mind either. It wouldn't be shocking if El Chapo did approve of what he found, though. That's because Penn, for all of his hard-bitten posturing, clearly buys into the romantic outlaw image of El Chapo. "El Chapo is a businessman first, and only resorts to violence when he deems it advantageous to himself or his business interests," he writes reassuringly, adding that the drug lord is "a simple man from a simple place."

Or maybe El Chapo took a look at Penn's prose and gave up. We'll never know.

It's a decidedly curious way for Rolling Stone to behave, given that this is the most prominent piece it has put into the world since the fiasco over its discredited story about rape at the University of Virginia. Clearly, the thought of getting such a scoop far outweighed the hit to the magazine's already-battered credibility. It's hard to decide which is worse, though: letting El Chapo hold your journalism hostage, or putting so much of Sean Penn's writing out into the world. Rolling Stone should be pretty embarrassed about both.