Anti-Clinton misogynists: If Bill's attackers are "defenders of women," why do they have a history of sexism?

For such self-appointed defenders of women, Bill Clinton's attackers have a serious and ugly history of misogyny 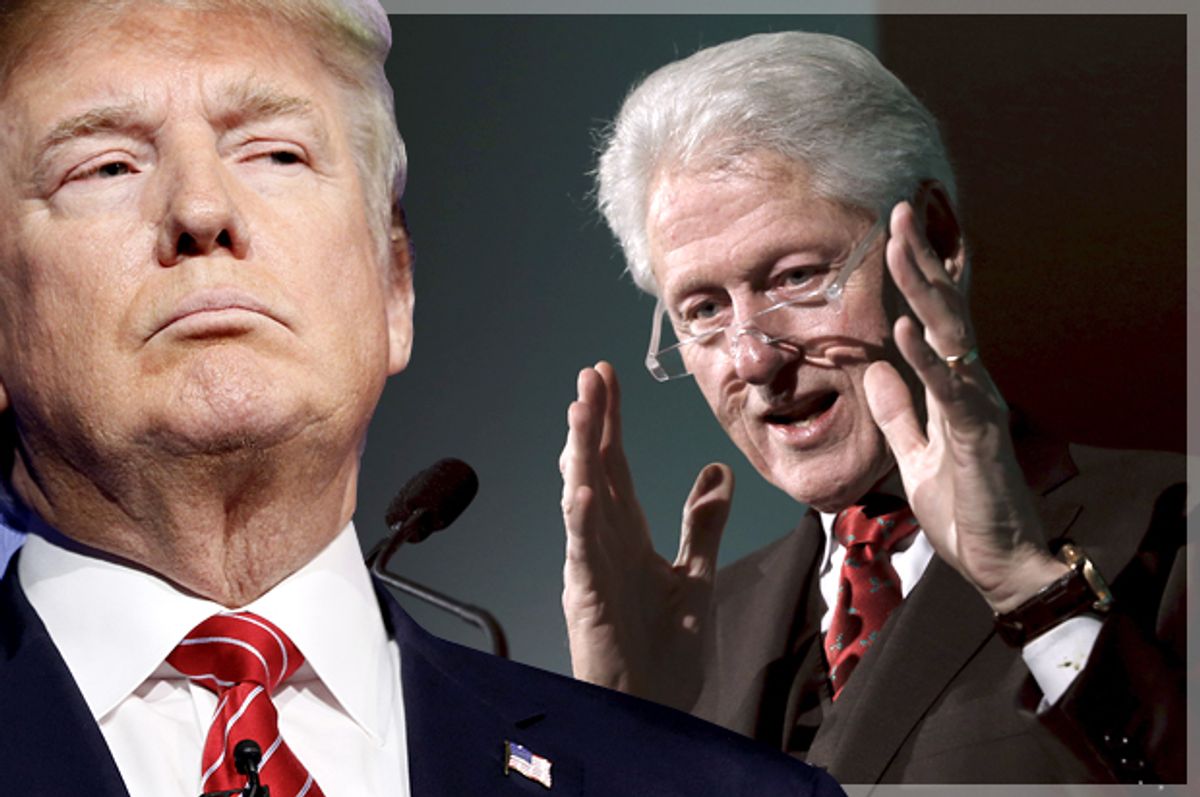 Donald Trump isn't the only rather unusual self-appointed champion of women these days, as he runs around flinging accusations that Bill Clinton is an "abuser" of women and that this somehow makes Hillary Clinton, by the transitive property of marriage, an "abuser" as well. Trump is being aided in his mission by Roger Stone, an old-school dirty trickster and spooler of right-wing bullshit, who has declared that he will be hounding Clinton with accusations of sexual abuse and harassment as long as she dares to run for president.

So who is this Roger Stone, who would like you to see him as a hero to women? Oliver Willis of Media Matters has put together a report and Stone's devout feminism and respect for womankind sure is exciting to behold:

During the 2008 election cycle, Stone created the group Citizens United Not Timid (C.U.N.T.) to attack Hillary Clinton. Stone promoted the false story that there was a video of Michelle Obama making racist remarks about white people.

Stone recently co-authored the book The Clinton's War on Women with Robert Morrow that purports to reveal how "Bill and Hillary Clinton systematically abused women and others — sexually, physically, and psychologically - in their scramble for power and wealth." Morrow has wished death on Hillary Clinton and written bizarre sexual writings about her, called Chelsea Clinton a "slut," and posted about "niggers" and "pro-faggot judicial activism" on social media. The book was dedicated to a holocaust denier who blames a "Jewish plot" for the 9/11 terror attacks.

And Willis is just focusing on the rhetorical attacks. It's worth remembering that this is all being done in service of the Republican war on women. One of the major reasons that these conservative activists want to keep Clinton out of office is they fear, with good reason, that she will protect reproductive rights, work for equal pay, and continue the Obama policy of fighting sexual assault on campus. Stopping a feminist from getting into the White House and reversing the progress women have made is the end goal of this campaign.

Stone's involvement with spreading the lie that Michelle Obama said nasty things about white people is an excellent indicator of the perverse conservative psychology behind these attacks on Bill Clinton. One of those truisms of the modern conservative movement is that racism basically ended in 1963, and therefore any modern accusations of racism amount to nothing more than liberals making stuff up in order to score political points. A corollary belief is that the only people who are victims of racial prejudice these days are white people, a belief that surfaces not just in the myth that there's a tape out there of Michelle Obama saying anti-white things (there isn't), but in high-profile Supreme Court cases where fears of this mythical "reverse racism" were used to undermine efforts, successfully in one case, toward racial integration in education.

Something similar is going on with these attacks on Bill Clinton, which are really attacks on his wife. As with claims of racism, there's a widespread tendency, especially on the right, to assume that accusations of sexual harassment or abuse are simply attempts by women to score political points or hurt men for the fun of it. So, as with crying "reverse racism!" there's a real me-too quality to Donald Trump and others in the pro-misogyny chorus pointing the finger at Bill Clinton. It's doubtful that any of them give a rat's ass whether any of the accusations are true. All that matters is scoring the political point.

What we're seeing with Stone, Trump and company is the classic "swift boating" technique, which was named after a 2004 campaign to discredit John Kerry by falsely accusing him of not earning the Purple Heart and Silver Star that he got for service in Vietnam. There was a real me-too quality to the entire campaign, as there is with any efforts to argue that liberals are the "real" racists or the "real" sexists. Kerry was up against George W. Bush, who had come under fire for not just being a warmonger, but doing so while having a history of evading service himself by joining the National Guard instead of going to Vietnam to fight in a war that he and his family supported. Conservatives were mad. They wanted a military service controversy of their own. Unable to come by one honestly, they just made one up.

You see a similar pattern with the Bill Clinton controversies. It's important to remember that conservatives spent the '90s bitter over the fact that Anita Hill dared come forward and testify against Clarence Thomas, alleging that he had sexually harassed her when she was working under him at the EEOC. Even though Hill's testimony did not prevent the Senate from confirming Thomas' seat on the Supreme Court, later journalistic investigations made it clear that Hill was almost certainly telling the truth. The embarrassment of the whole situation haunted the conservative movement, and there was almost a tit-for-tat quality to the immediate efforts to find someone who would point the same finger at Bill Clinton.

A similar thing is happening with conservatives re-floating these old accusations, even though they were quite thoroughly investigated by Ken Starr — who had the level of prosecutorial discretion and funding that is completely impossible to imagine for any other sexual abuse or harassment accusation ever made under any other circumstances — all turning up nothing of substance. Bill Cosby's name comes up frequently, and you get that same weird tit-for-tat sense, as if conservatives are saying, "OK, you liberals got one, now it's our turn."

Except, of course, there's no actual reason to believe that liberals wanted Cosby to be a rapist, in the same way that conservatives clearly want Bill Clinton to be one. Sure, a lot of liberals didn't like Cosby because he is a moral scold who feeds blame-the-victim narratives about racism, but there really was zero desire on the left to "take out" Cosby. Most liberals — myself included — were really upset at realizing that the evidence against Cosby was both substantive and substantial. But this notion that there are people out there who are actually interested in justice and not just in scoring points against political opponents is clearly more than right-wing operatives can wrap their heads around.

There's something bone-chilling about seeing open misogynists like Stone and Trump pose on TV and use words they picked up from feminist Twitter accounts, like "abuser," words they don't really understand and don't really care to understand. It's clear that they don't really see these issues as serious issues, but as nothing more than empty charges you can float to score political points.

That, in turn, creates a very real danger that their phony posturing will undermine the discourse that serious people are having about these serious issues. Trump is a fabulist, of course. He has a history of implying that Barack Obama's not a natural born citizen and now he is doing the same thing to Ted Cruz. Hell, he kicked off his campaign with a bona fide false rape accusation, accusing Mexico of exporting rapists to our country, which is absolutely not true. He's a known bullshitter who will say anything to score a political point.

His voice in the discourse about sexual abuse only serves to bolster the claim that people who make these kinds of accusations are doing so not because they are true, but because they are sleazy people who will say anything in order to undermine and hurt others. Trump's crusade against Clinton has the chance of casting doubts on allegations made by people who, unlike Trump, are actually interested in the truth.

Of course, making it harder for honest people to speak the truth about their experiences may not be the main reason for all this, but for the misogynists who are pushing this line, it's clearly a welcome side benefit.