Bowie's Live Aid magic: An unforgettable show, from the spine-tingling "Heroes" to his audacious "Dancing in the Street" duet

Even in the legendary Live Aid line-up, Bowie's set stood out for its power, energy, empathy and charm 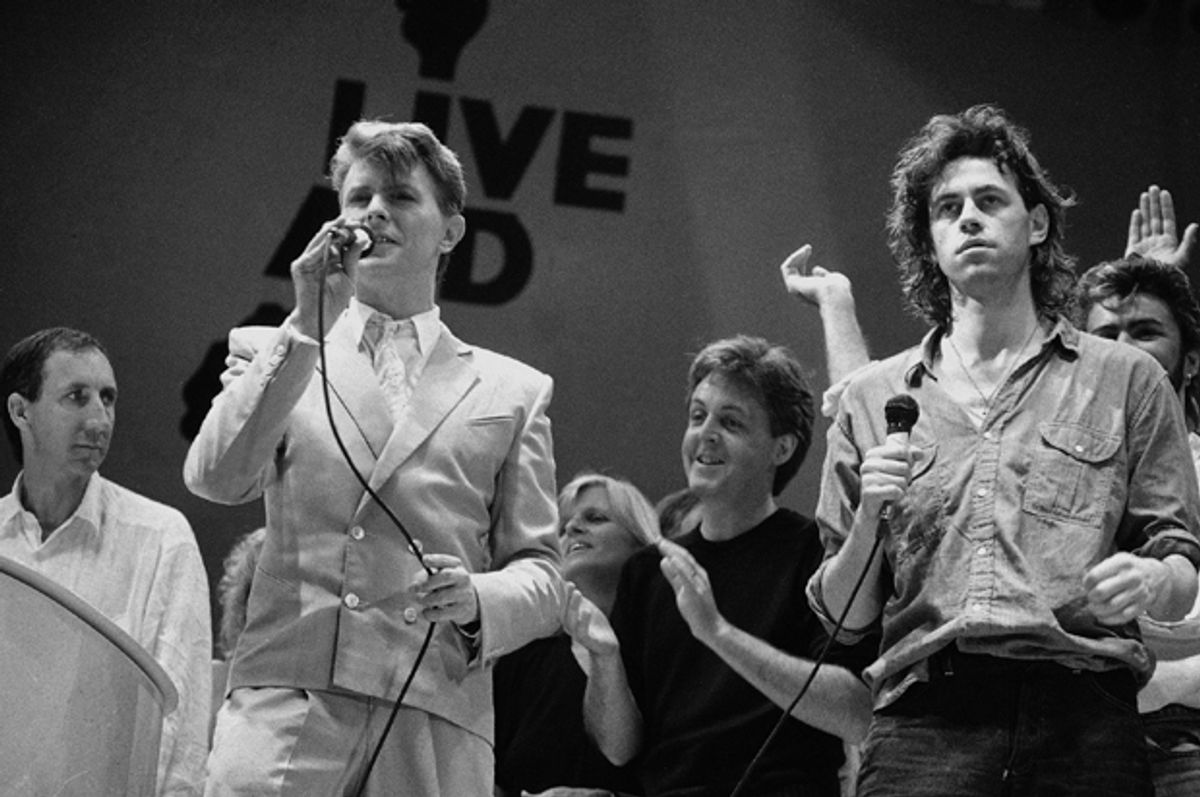 “It's twelve noon in London, seven AM in Philadelphia, and around the world it's time for: Live Aid ...."

But you’d never know it from the way the man casually strode onto the stage, his light gray suit not even displaying the tiniest wrinkle despite being out and about in it all day, topped by a formidable blond pompadour that would defy heat, humidity, and the earth’s gravitational pull. As his band hit the intro to “TVC-15,” Bowie went to the front of the stage and with a giant smile, acknowledged the crowd. Crisply and exactly on cue, he grabbed the mic and dove head first into the song. He would swagger and smirk and sway his hips from side to side. Not letting Bono be the only one to get away with stalking the stage, Bowie would hop down onto the platform below the monitors and work the crowd from end to end, heading stage left specifically to acknowledge a flag adorned with the lightning bolt Aladdin Sane image.

This wasn’t a band Bowie had ever played live with before (more on this below), and while some fans longed for the understatement of an Eno or a Fripp, or the practiced precision of long-time Bowie collaborators such as Carlos Alomar and Earl Slick, it was the energy of this band of newcomers that sold the material this day. This wasn’t an established artist rolling out the parade of hits with nothing to lose. Everyone on that stage was at the top of their A game. It was a mix of excitement, energy, and sheer terror that combined for a bright, crisp performance that invigorated the crowd at this point in a very long day.

The unmistakeable guitar riff of “Rebel Rebel” was up next, and the Wembley crowd began singing the melody back as soon as the band had gone through one refrain. Bowie would hold his mic out for the crowd to answer on the “Hot tramp/I love you so” chorus, and the grin on his face from the response tells you everything you need to know. In his exuberance, Bowie would grab one of the backing singers to engage in a quick pas de deux (and from the look on her face, it wasn’t rehearsed) while the band vamped on the bridge.

More than anything, the crowd’s roar of recognition at the intro to “Modern Love” reminded them, and television, and Bowie himself, that just a few years earlier he had been at the top of the charts around the globe. On the Serious Moonlight tour, “Modern Love” was a gently rollicking good time; at Live Aid it was a rolling freight train, full speed ahead.

A hush would fall over the massive crowd as the intro to “'Heroes'” started. Over the musicians, Bowie would tell the crowd, “I’d like to thank and introduce my band, who got together so quickly to do this show for me. I am forever in their debt.” It was then that he introduced Kevin Armstrong on guitar, Matthew Seligman on bass, Pedro Ortiz on percussion, Neil Conti on drums, Clare Hurst on saxophone, Tessa Niles and Helena Springs on backing vocals, and Thomas Dolby on keyboards and backing vocals.

He went on to dedicate the song “To my son, to all our children, and to the children of the world.” With that, the crowd fell quiet once again for the opening verse. “'Heroes'” is a song that has transcended its original meaning many times over at this point, and at Live Aid it soared into anthem status: it was about life, and birth, and it made you feel like we were part of changing the entire damn world at that moment. Out of all of the memorable moments that came out of July 13, this version of “'Heroes'” would be close to the top of that list.

Bowie was supposed to play five songs, but agreed to leave “Five Years” out of the set so that his time could be used to show documentary footage of the famine in Ethiopia instead. Bob Geldof said, “Bowie was sobbing…he says, I want to drop a song and introduce this.” As the band left the stage, David announced, “Let us not forget why we are here. People are still starving.” More money would be pledged after this segment than at any other time during the concert.

The musicians who performed onstage with Bowie at Live Aid came together three months earlier, in a case of “right place, right time.” Bowie was in the UK filming "Labyrinth," and also working on his contribution to the "Absolute Beginners" soundtrack. A group of session musicians working with Thomas Dolby would receive an invitation from a “Mr. X” to participate in a session at Abbey Road. Mr. X was Mr. Bowie, and the group of musicians gelled quickly.

In the band were Kevin Armstrong on guitar (Prefab Sprout), Neil Conti (drums), and Matthew Seligman on bass (Soft Boys, Thompson Twins). They would be joined by Clare Hurst (sax) and Thomas Dolby (keyboards), Dolby there on the recommendation of Seligman, who had played with Dolby and Armstrong in a well-regarded London band called Local Heroes SW9. Bowie’s participation in the benefit concert had been eagerly pursued by organizer Bob Geldof, and (according to "The Complete David Bowie") one day he asked the band if they would be willing to join him: “I’ve got this little gig—can you do it?”

The band prepared a possible list of seven songs, showing up on Sundays three weeks in a row to rehearse. As Bowie was in the middle of filming, time was at a premium. He didn’t settle on the final setlist until the night before the show, and the band had never played those songs back to back. They recorded the final rehearsal, gave everyone in the band a tape of the show, and hoped for the best—and the best is how it worked out to be.

Bowie’s Live Aid duties wouldn’t end with his set, however. He would end up as part of the all-star chorus helping Paul McCartney through “Let It Be,” and he would sing the opening lines of “Do They Know It’s Christmas?” during the London finale.

But Bowie’s Live Aid story would be incomplete without the saga of his duet on “Dancing In The Street” with Mick Jagger. With Bowie in the UK and Jagger in the U.S., the original idea was for them to sing some kind of intercontinental duet via satellite, but there was no way it would work from a technical perspective. Instead, the two decided to film a video that would, instead, be broadcast simultaneously on the big screens at Wembley Stadium and JFK Stadium, and on television for those watching at home.

Basically, what we ended up with was watching two friends get sloppy drunk and go out for karaoke. Except the two friends are famous rock stars and can actually sing. And there is definitely some professional singing going on, but that seems to be an accident of talent, and not any actual intent behind either Jagger or Bowie. The song they choose is all right, but then it’s made a mockery of by a clumsy, ham-fisted rearrangement (that, to be honest, isn’t that far from a karaoke track).

It all started out well enough; the vocals and rhythm tracks were recorded in London, by the backing band that was working with Bowie on the "Absolute Beginners" soundtrack. But then, Jagger—who, let’s remember, had just released the eminently forgettable "She’s The Boss" and was working on the Stones’ "Dirty Work"—took the tapes back to New York where he mucked up what could have been a good thing with synthetic-sounding horns, brassy backing singers, and way too much '80s G.E. Smith guitar.

And then we come to the video.

Being a David Bowie fan in high school was a tough thing, the kind of situation where you’d get shoved into the lockers with extra oomph and with a mumbled f-word (the pejorative term used to describe homosexuals). To be honest, it wasn’t much easier being a fan of the Stones in the late '70s either, because the people who cared about that also pretty much thought the same thing about Mick Jagger.

This video did not help in that regard.

Of course, on the other hand, there was much that was scandalous and lovely and ridiculous and the stuff of many people’s (both male and female) fantasies. But all of that was largely ruined by hijinx, by that ridiculous duster Bowie is wearing, by Jagger’s hideous aquamarine shirt, by the dance moves that are…not dance, but rather like a couple of spazzy teenage boys practicing in front of their mirrors. And the negative production values don’t help, like a line of parked cars with headlights on to give atmosphere, and zero attempt to hide or obscure the beer can Jagger chugs in the middle of the song.

(A friend once sat behind the stage for a Stones concert, and had a pair of binoculars with him. He decided he would use the binoculars to read Jagger’s teleprompter. He learned that the prompter didn’t just offer lyrics, but also stage directions, like “Extra spazz!!” That is an apt description of what the only choreographical direction could have been for this video.)

All of the above, of course, also describes the video’s charm. Those who had been paying attention all these years felt like we were part of some inside circle, because we got the jokes, while the rest of the world sent the single into the top 10 in the US and #1 in the UK. (It would end up being Bowie’s last recording to chart so highly.)

Let us not remember “Dancing In The Street” for that, but rather for the high ham offered by Bowie on the lyric, “On the streets of Brazil,” when he shimmies a hip wiggle that undoubtedly caused preteens everywhere to go into early puberty, while simultaneously caressing himself (see above). It’s as Bowiesque as anything else that happened that day.