Kissinger met regularly with Secretary Clinton, and applauded her hawkish foreign policy in a handwritten message 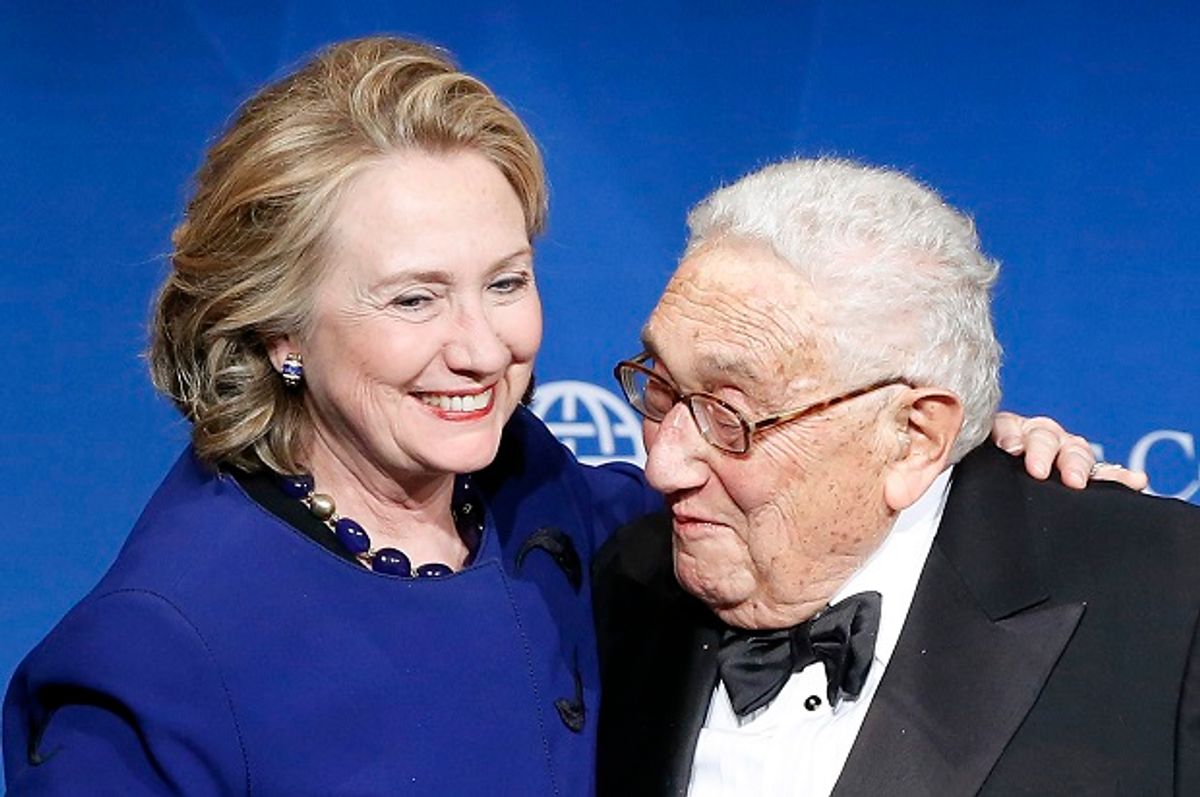 "I greatly admire the skill and aplomb with which you conduct our foreign policy," wrote Henry Kissinger in a 2012 letter to "the Honorable Hillary Rodham Clinton." The compliment was included as a handwritten postscript added to the printed letter.

The Feb. 7 letter, which was released in a batch of emails from former Secretary of State Hillary Clinton, is a request that she help declassify documents from Kissinger's time as secretary of state, which he says constitute "a unique record of a critical period in American foreign policy."

Critics say Kissinger helped carry out egregious war crimes in this critical period, during which he served as secretary of state under presidents Richard Nixon and Gerald Ford. (A scanned copy of Kissinger's printed message to Clinton)[/caption]

The late journalist Christopher Hitchens devoted an entire book to detailing the war crimes overseen by Kissinger, who infamously declared "The illegal we do immediately; the unconstitutional takes a little longer."

In "The Trial of Henry Kissinger," Hitchens argues the former secretary of state should be tried "for war crimes, for crimes against humanity, and for offenses against common or customary or international law, including conspiracy to commit murder, kidnap and torture."

Despite the alleged crimes he oversaw, Kissinger was awarded a Nobel Peace Prize, leading critics like dissident scholar Michael Parenti to condemn what he said should be more accurately referred to as the "Nobel Peace Prize for War."

Yet Kissinger's intimate handwritten note is just one sign of the close ties between the accused war criminal and Clinton, who is herself notorious for advocating a similarly aggressive, hawkish foreign policy.

In her glowing review of Kissinger's new book "World Order" in The Washington Post in September 2014, Clinton returned the favor, expressing admiration for Kissinger. She proclaimed that Kissinger's foreign policy analysis and approach "largely fits with the broad strategy behind the Obama administration's effort." Adopting Kissingerian language, the bellicose secretary of state said she yearns for "sustaining America's leadership in the world."

"Kissinger is a friend, and I relied on his counsel when I served as secretary of state," Clinton revealed in the review. "He checked in with me regularly, sharing astute observations about foreign leaders and sending me written reports on his travels."

Several emails provide more insight into the cozy relationship between Clinton and Kissinger.

In a June 2009 email titled "Startegy memo," Clinton mentions an upcoming dinner she will be having with Kissinger — along with Cold War-era statesman and National Security Advisor Zbigniew Brzezinski, who pushed for the U.S. to arm Islamic extremist mujahideen militants in Afghanistan in order to fight the Soviet Union, giving rise to al-Qaeda and the Taliban. In a July 2011 email, Clinton asks her aid Huma Abedin to get her "a copy of Kissinger's report on his China visit." "Everyone seems to have one except me," she lamented. (An email in which Clinton requests a report by Kissinger)[/caption]

An October 2009 email reveals that Kissinger even personally spoke with foreign heads of state, presumably to discuss U.S. foreign policy. In a message from Jeffrey Feltman, assistant secretary for the State Department's Bureau of Near Eastern Affairs, an upcoming phone call between Kissinger and Israeli Prime Minister Benjamin Netanyahu is discussed. Clinton is not the only U.S. leader with continued ties to Kissinger, nevertheless. Her successor as secretary of state, John Kerry, himself has frequently revealed small hints about his own friendship with the accused war criminal, who once proclaimed "It is an act of insanity and national humiliation to have a law prohibiting the president from ordering assassination."

In remarks at a UNESCO luncheon in October 2015, Kerry said "I had lunch the other day with Henry Kissinger and he obviously continues to amaze all of us."

Less than two weeks later, in a speech at the Carnegie Endowment for International Peace, Sec. Kerry again noted that he had just recently "had the privilege of having lunch with" Kissinger, whose books Kerry said influenced him.

Even before he became secretary of state,  Kerry applauded Kissinger. In his testimony before the Senate Committee on Foreign Relations as a nominee for the position, Kerry cited Kissinger and "his superb book on diplomacy."

Nor are Clinton and Kerry alone. Samantha Power, who worked in the Obama administration's State Department and now serves as the U.S. ambassador to the U.N., has even gone to baseball games with Kissinger.

At age 92, Kissinger is one of the longest-serving statesmen in U.S. history. Since 1969, the accused war criminal has played an important role as a foreign policy advisor in most, if not all U.S. presidential administrations. Still today, Kissinger works with the Obama administration.

Thanks to the work of historians, however, we now know much more about the atrocities Kissinger oversaw while in office.

As just some of the myriad examples of his crimes, in "The Trial of Henry Kissinger," Hitchens documented Kissinger's implications in the following:

1. The deliberate mass killing of civilian populations in Indochina.
2. Deliberate collusion in mass murder, and later in assassination, in Bangladesh.
3. The personal suborning and planning of murder, of a senior constitutional officer in a democratic nation -- Chile -- with which the United States was not at war.
4. Personal involvement in a plan to murder the head of state in the democratic nation of Cyprus.
5. The incitement and enabling of genocide in East Timor
6. Personal involvement in a plan to kidnap and murder a journalist living in Washington, D.C.

This only scratches the surface.

It is now known that, in the 1970s, Kissinger met with Nazis to give advice on how to overthrow the left-leaning West German government.

While the Khmer Rouge was carrying out a campaign of genocide in Cambodia, Kissinger backed it, in an effort to crush the Vietnamese Communists. "You should tell the Cambodians that we will be friends with them. They are murderous thugs, but we won't let that stand in the way," Kissinger remarked in 1975. "We are prepared to improve relations with them."

Moreover, Kissinger assured far-right, authoritarian Latin American governments that the U.S. would support them, helping them "to succeed" in Operation Condor, their systematic campaign of state terrorism against left-wing movements.

And when Cuba assisted Angola in its fight for independence from colonial Portugal in 1975, Kissinger wanted to "clobber Cuba" and "smash Castro."

Kissinger and  Nixon ordered the U.S. government to "make the economy scream" in Chile, when the country democratically elected a socialist government. "The issues are much too important for the Chilean voters to be left to decide for themselves," Kissinger declared, while overseeing the violent overthrow of Chilean democracy.

On the 40th anniversary of the Sep. 11, 1973 CIA-backed coup that installed far-right dictator Augusto Pinochet, Kissinger met with Secretary of State John Kerry to advise him on U.S. policy in Syria.

Because of these crimes, there are countries to which Kissinger avoids traveling, for fear of being arrested.

In many ways, Clinton is a disciple of Kissinger and his aggressive, so-called "realist" school of foreign policy. Just as Clinton has overseen destructive wars and continuously pushed for military-heavy positions on Syria, Ukraine and more, Kissinger promoted a "madman" strategy in Vietnam, trying to make enemies believe the U.S. "might be crazy" enough to use a nuclear bomb.

One email, in fact, suggests that, as secretary of state, Clinton saw Kissinger as her role model. In a December 2009 message, Clinton speaks of the Nixon-Kissinger partnership as the ideal, mourning the fact that her partnership as secretary of state with President Obama was not as close. "In thinking about the Kissinger interview, the only issue I think that might be raised is that I see POTUS at least once a week while K saw Nixon everyday," Clinton wrote. "Do you see this as a problem?"

Jared Flanery is an historian and writer. He is a graduate student at Columbia University and the London School of Economics. He can be contacted at jmf2235@columbia.edu and found on Twitter at @Flaneury.