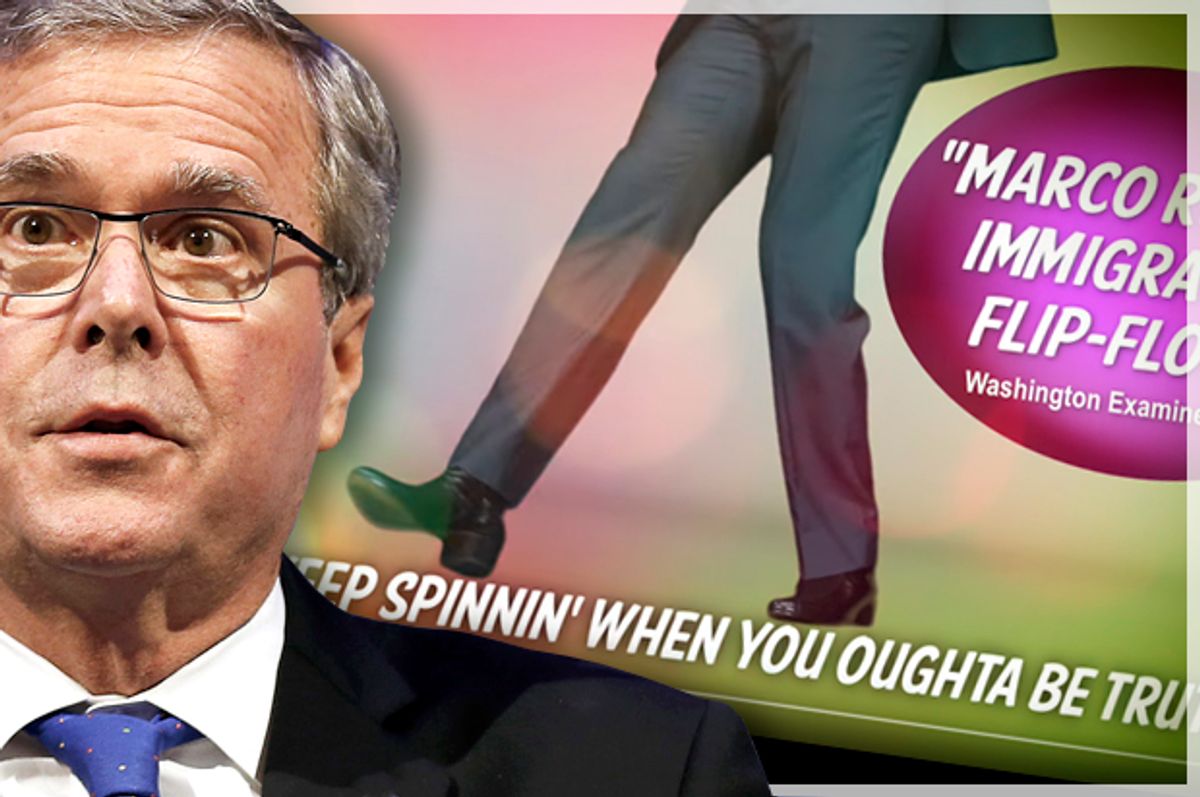 There’s nothing wrong with Nancy Sinatra, and a song she made famous, “These Boots Are Made for Walkin',” is a popcult landmark. But Lee Hazelwood, the genius who wrote the tune, is rolling over in his grave after a new campaign ad called Marco’s Flip-Flop Dance.” It was put together by Right to Rise USA, the SuperPAC that supports Jeb Bush, and whatever they spent on this one was a waste of money: This season has seen some bad campaign ads, but this may be the worst yet.

Jeb Bush has defined himself as a different kind of candidate than Donald Trump, and indeed “Marco’s Flip-Flop Dance” has a slightly different tone than Trump’s recent apocalyptic campaign commercial. The Jeb/Marco ad is… lighter, more fun, almost entertaining. The problem is, the point of a campaign ad isn’t to riff on pop culture from decades past or work clever puns, but to win votes. And this one, unless it’s aimed at over-60 Quentin Tarantino fans deciding between Jeb Bush and Marco Rubio, just seems weirdly misfired.

First of all is the musical choice. Musically, much of the campaign has been fought with hip hop – Bernie Sanders and Ben Carson even have rap-musician supporters. Rubio, who knows Pit Bull personally, has declared himself a partisan of West Coast hip hop. But pulling a song from the early ‘60s whose most prominent use over the last few decades was in “Pulp Fiction” – that’s 1994 – just makes Jeb supporters look nostalgic. Again, it’s a great song, but what were they thinking?

The other problem is the ad itself – was it designed by a grade-schooler? And the parodic lines “These boots are made for flippin’/ and that’s just what they’ll do” doesn’t exactly stir the blood. The GOP race right now is definitely about rage. It’s also about big money, and the ad, it’s hard to avoid saying, looks cheap.

The other weird angle here is the way the Bush campaign is taking the old George W. Bush approach to John Kerry. This might be great if Kerry were running and if it was 2004. But it’s 2016 now, and Rubio is a different kind of candidate. His appeal is in part his youth – he’d called “young Marco” in the song – and his flexibility, ease, ability to listen. How many swing voters are really worried about him, at this point, as being too pragmatic? And if there are a lot of voters out there like that, why are two of the ads quoted in the Marco commercial from 2013? We’re getting warmer here, but Bush still seems like he’s playing catch-up. At least we get to see snazzy Rubio-like boots and not someone waving flip-flops.

Now one possibility is that the ad is meta, which seems to be Jonathan Chait’s take. Chait is a smart guy, but can he be right here? Here's how Chait breaks it down:

The message is that Rubio is a lightweight and a fake, and every element of the ad drives it home.

The chorus line — “one of these days young Marco’s gonna flip-flop flip on you” — ties together all of these strands.

Okay, maybe. Maybe Jeb’s SuperPAC has chosen to zag where everyone else is zigging, by being cute and nostalgic and meta instead of hostile and paranoid. But unless they can do better the next time, the Bush campaign may be ready to move to the sidelines. Until then, see you at Jack Rabbit Slim’s.