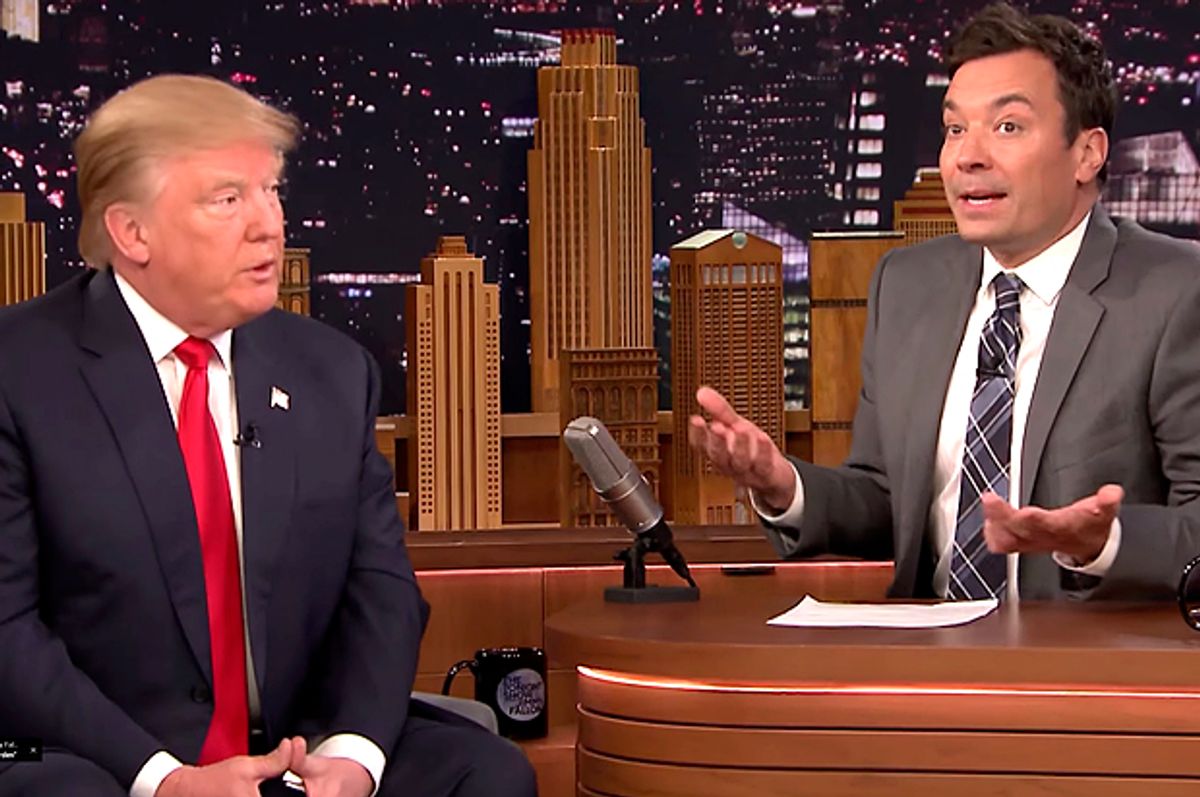 There’s a certain kind of logic to the forced, awkward dance between late-night TV shows and front-running presidential candidates. It’s theatrical handshaking, between the people who make jokes and the people who are the butt of jokes—often somewhere between ceremonial kissing-the-ring and informally declared truce, depending on the relative asperity of the parties involved. Candidates are there to demonstrate a modicum of unselfconsciousness, but not too much; comedians are there to try to seem broadly appealing and invested in the future of the country, but only insofar as it is funny and upbeat.

As with so many things about Republican frontrunner Donald Trump’s odious campaign for presidency, logic ceases to function once he enters the equation. This careful tango between the establishment’s politics and the mainstream media breaks down in a way that at first must seem like progress; out with the old structures, in with the new regime. It is not progress, though. It is just what happens when an individual enters an ecosystem trading on bad faith. Donald Trump’s not-so-self-funded run for presidency is a towering monument to Know-Nothing politics, as John Cassidy wrote in the New Yorker. And though that in and of itself is breathtaking, seeing it interact with a broadcast network that theoretically has an interest in the public—albeit one as routinely patronizing as NBC—is to watch whatever fabric holds America together unravel.

Last night Donald Trump made his second appearance on “The Tonight Show With Jimmy Fallon." It’s one time too many; Hillary Clinton and Bernie Sanders have each made the rounds once in this election cycle, following the foretold tradition of presidential candidates on television in the short time that TV has been a medium. Worse, Trump has been notably unchallenged on NBC, whereas Jimmy Kimmel and Stephen Colbert both tried to throw a barb in his direction. (Kimmel’s questioning of Trump might be the most rigorous the candidate faced in late-night, and he directed that rigor to Clinton and Sanders as well.) First, Jimmy Fallon appeared to mostly want to bring Trump onto his show so that he could play his own well-worn Trump impression opposite him; then Lorne Michaels called Trump onto “Saturday Night Live,” where the obviously uncomfortable cast tried to interact humorously with a man who wants to have over 11 million people deported. In the act of not taking Trump seriously, NBC is taking Trump more seriously than anyone; treating him like a regular presidential candidate gives him credibility that belies how serious the threat of him becoming president is.

Hence the cognitive dissonance of Fallon referring to Trump’s plan to ban Muslim immigration—“the Muslim thing,” as Fallon put it—as nothing more than “a little controversial.” Or the bizarrely innocuous job interview Fallon directed at Trump, that asked him mildly if he’d be comfortable relocating. Or the worryingly cushiony juxtaposition between Fallon’s vague, upbeat questions and Trump’s vague, upbeat answers. His explanation for banning Muslims was that “there’s hatred,” and “We’ve got to figure out what’s going on,” before descending into a long train of “other people” and “people” and “do something” that cried out for a proper noun or two. From a regular person, this might be forgivable. Donald Trump is not a regular person. And what’s so galling about Fallon calling him to “The Tonight Show” to once again stroke his ego is the frustrating charade that Trump is just another, ordinary candidate, and not an anti-immigrant, openly racist, casually misogynist opportunist with a billion dollars and counting.

But of course, NBC has other priorities. Why did Jimmy Fallon call Donald Trump back onto his show, so the billionaire could sit awkwardly close to the Roots and shrug his way through Fallon’s softballs? Ratings, naturally. Last time, Trump’s appearance gave Fallon an 18-month high; his hosting gig on “Saturday Night Live” got the variety show its highest ratings since 2012. But it leaves me wondering: What kind of ratings would a show get that actually asked Trump a hard question, and then waited for an answer?