"Look up, I'm in heaven": Bowie's haunting farewell "Blackstar" is a triumph

Bowie's death took us by surprise, but he laid out all the clues in his final release, waiting for us to catch on 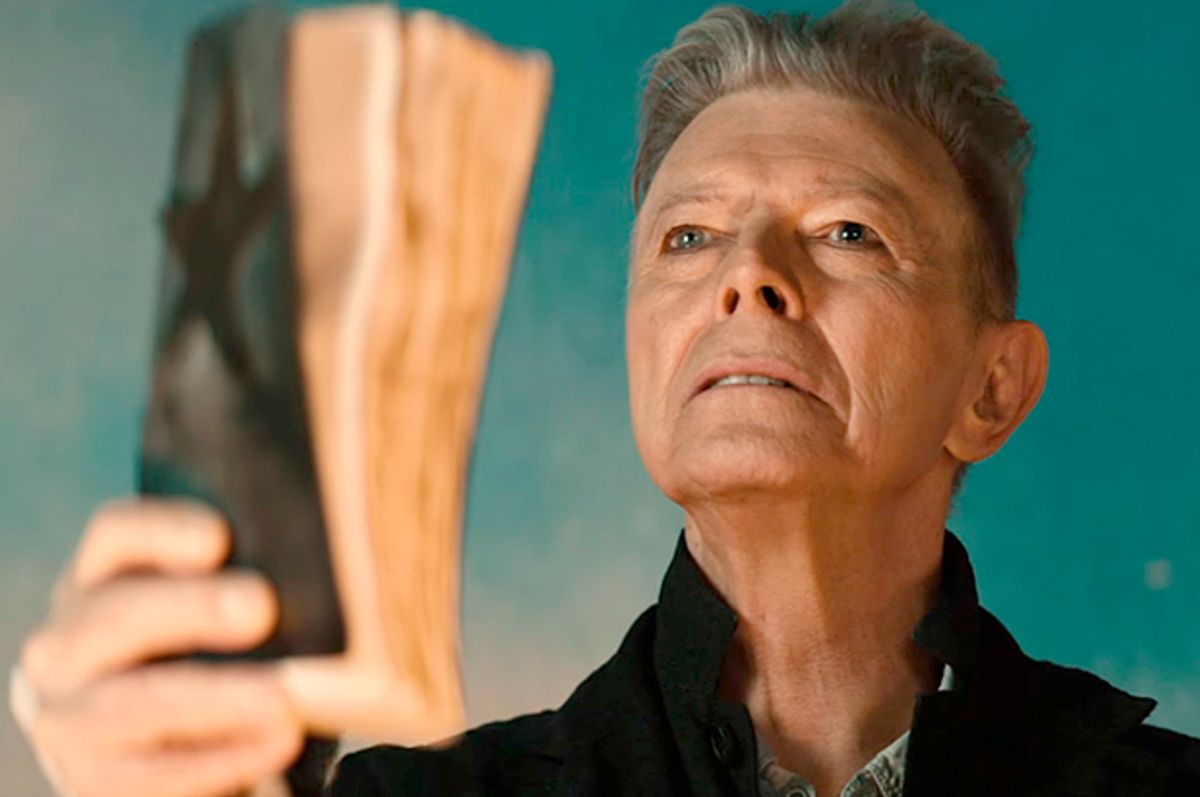 The title song wasn’t science fiction after all. It was a lamentation, it was a dispatch of departure. We were looking for clues to connect the character in the video with Major Tom, and ignoring the obvious messages: “Take your passport and shoes” and “How many times does an angel fall?” and “Something happened on the day he died.” It is a fever dream, it is hallucination, it is the pieces your brain puts together while ill and half asleep. (The other assertions out there, claiming that the song is about ISIS, seem mostly to be assertions based on an offhand comment that hasn’t been clarified or explored in sufficient detail.)

Then there is “Lazarus,” the only song written for the musical to make it out of the recording process. “Lazarus” is a great song--a tremendous song. It is uncomfortable and keening, it is ethereal and soaring. Yet, it has the most traditional rock form out of the seven songs on the record. And it opens:

“Look up here, I’m in heaven
I’ve got scars that can’t be seen
I’ve got drama can’t be stolen
Everybody knows me now”

Thinking about this now, after the first day of Bowie’s passing, the meaning is clearer. It’s Bowie imagining the aftermath of his death — free from his earth form, he no longer has to carefully guard his health status, and the world would be talking about him. (The international response has been quite astonishing, and Amazon has sold out of all physical copies of the man’s records.) Or it could be Bowie wanting to be free of the burden of his physical body after a year and a half of being under cancer.

The next verse takes us through the last two years: “Look up here, man, I’m in danger/I’ve got nothing left to lose/I’m so high it makes my brain whirl.” Whatever treatment he was undergoing for his cancer, it couldn’t have been fun; friends who have been through chemo talk about descending into “chemo fog” where they can’t manage to do anything but lie there and wait for it to be over.

And at the end, he tells us once again: “this way or no way/you know, I’ll be free/Just like that bluebird,” repeating the refrain twice before closing with “You know, I’ll be free," repeated three times, as the song comes to a close. Calling it “Lazarus” was a ruse to get us to focus on the title, on a man raised from the dead. And maybe Bowie also thought that he might beat his illness; maybe “Lazarus” was a hope for him to emerge from his sickness.

It’s convenient to see “Sue (In A Season Of Hope)” as a continuation of "’Tis a Pity She Was A Whore,” but if you remove that context, it could also be the point of view of a caretaker of someone with a terminal illness. Lyrically, the song is so matter-of-fact and conversational in a way that is not very much like Bowie, but he balances it against this manic, free-jazz composition which belies the calmness of the lyrics, and but accurately mirrors the franticness of someone trying to keep up, someone trying to stand up bravely against an unbeatable illness. There’s a world-weariness to the vocal delivery, an exhaustion, that tells the story of not being able to keep one step ahead of a deadly disease.

In “Dollar Days,” it gets bleaker: “If I never see the English evergreens I’m running to/It’s nothing to me, it’s nothing to see,” he insists. “I’m falling down/don’t believe for just one second I’m forgetting you/I’m trying to/I’m dying to.” “I’m dying to push their backs against the grain/and fool them all again and again,” the lyrics assert, coming from a man who spent the last year and a half with liver cancer while staging his first musical and writing, recording, and filming the videos to go along with it.

“I Can’t Give Everything Away” is an apology and a lament, he can’t give it all away, even though he’s trying to, he’s running out of time. That lyric reminds you that Bowie opened up his depth and breadth of his personal archive for the 2013 exhibit “David Bowie is here” at London's Victoria and Albert Museum; he literally placed zero constraints on the exhibit, except that he did not want to be involved. Otherwise, they could use anything they wanted. In “I Can’t Give Anything Away” he is feeling his impending death—“With skull designs upon my shoes/I can’t give everything away,” he laments, before ending the record with this:

The other two tracks on the record—“Tis a Pity She Was A Whore” and “Girl Loves Me” are tougher to interpret, and this in itself was an indicator: this was a seven-record, 40-minute release that didn’t have a lot of cohesion, rhyme or reason to it, with two songs that had been previously released, and yet "Blackstar"’s release was handled with as much staging and attention as any of Bowie’s previous, larger projects. The PR and marketing elements were controlled at every level, from the name, to the logo, to the logo-as-name element, to the staging of the videos—especially the first one, with an official release event, open to press and fans, to unveil “Blackstar.” (There were even “Blackstar” logo-ed popcorn boxes.)

While drafting what was initially meant to be a straightforward album review, one hanging question remained: Why did he go to all this trouble for what felt like an incomplete set of music? There are few artists who understood the internet as quickly and as well as David Bowie did; he knew that he could have created gorgeous digital releases around single or small groups of songs, avoiding the complications to produce physical media. Initially, the answer to that seemed simple enough—that Bowie still very much cared about his visual image and still took a great deal of satisfaction and pleasure in that side of the business.

But holding the physical media in your hand today answers that question again: he was preparing his own funeral card. The packaging is, as they say, “none more black,” but it’s not even that: when you first open the CD, the card on the right contains a formal portrait in a traditional pose; it could be an oil painting from the 1800s. And on the other side, is a photograph of the heavens. It is a striking sight, and undoubtedly meant to be.

“Look up, I’m in heaven” -- there’s no doubt that Bowie is there, or whatever he believed it to be, and we’re all looking up there and missing him tremendously. May we all be so lucky to be creating and innovating at the level of "Blackstar" until our last dying breath.