Paul Ryan is delusional: His dream of a compassionate GOP that's the party of "opportunity" is pure fantasy

Ryan may be earnest about transforming the GOP, but a party that allows Trump to exist cannot be an "ideas party." 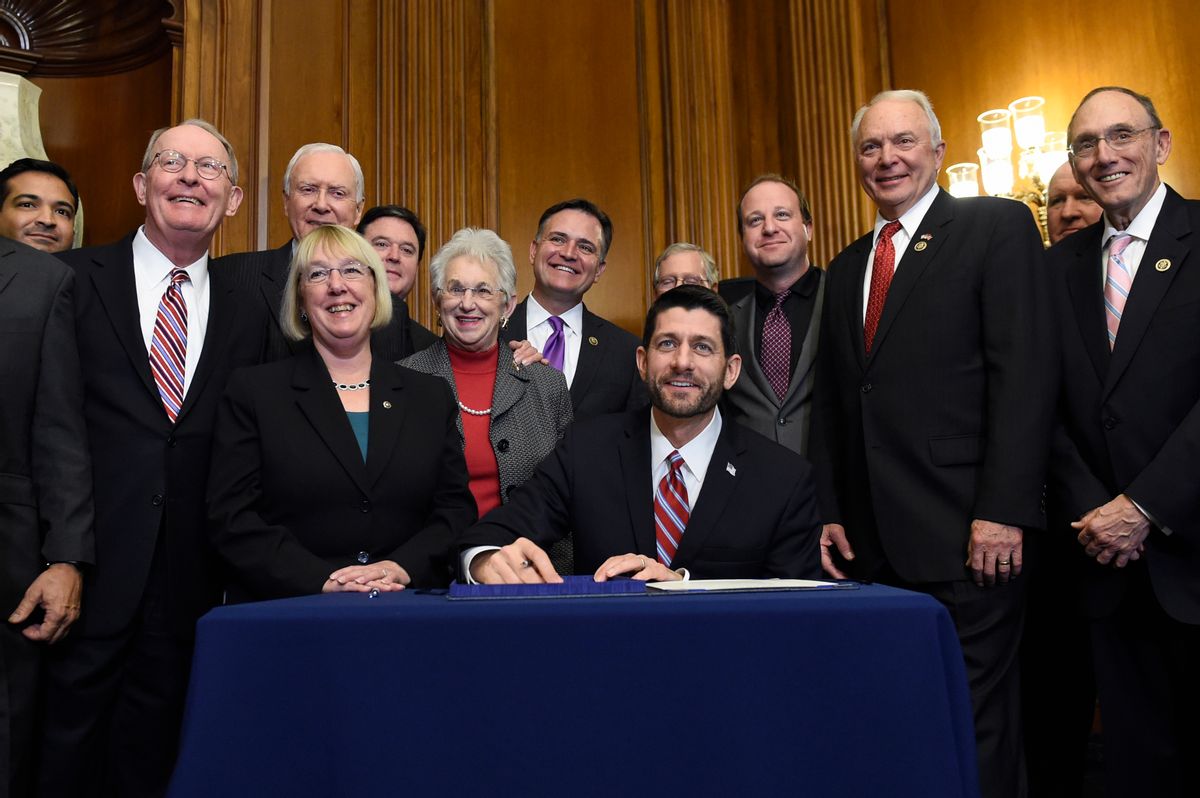 House Speaker Paul Ryan of Wis. prepares to sign legislation on Capitol Hill in Washington, Wednesday, Dec. 9, 2015, that changes how the nation's public schools are evaluated, rewriting the landmark No Child Left Behind education law of 2002. (AP Photo/Susan Walsh) (AP)
--

The Republican presidential race is amplifying everything wrong with the party. Led by self-promoting hucksters like Donald Trump and Ted Cruz, it's not exactly a showcase of the best and brightest the GOP has to offer. The serious candidates have been overwhelmed by the volume and gas of the “outsiders.” This plays well among the base, but it's damaging the GOP's national brand.

Paul Ryan, the Republican Speaker of the House, is aware of this problem, and he's trying to counteract it. Over the weekend, Ryan spoke with several GOP presidential hopefuls (excluding Trump and Cruz) at the Kemp Foundation poverty summit in Columbia, South Carolina. According to Politico, Ryan's message was clear: “He wants the Republican Party to be an 'agenda party, a solutions party, an ideas party, so that we can make our case, not based on personality, but based on ideas to the country. Because that's the kind of election we want to win.'”

The speaker also talked up the need for education reform. We have to bust up the “poverty-industrial complex,” Ryan insisted, and that requires something beyond rank obstructionism. “If we don't have a vibrant, inclusive, inspiring, exciting majority...the Republican Party, we will not be able to fix these problems...We are not just an opposition party, we are a proposition party.”

These are noble aspirations, but it's hard to take them seriously. The Republican Party Ryan envisions doesn't exist; it's a phantasm. At least since Obama took office, the GOP has done nothing but obstruct. As I wrote last week, Republicans have "pursued no real positive agenda, choosing instead to undermine the president and stage symbolic protests votes to appease a disillusioned base.”

It's also strange to hear Ryan talk about a kinder, more substantive GOP when he appears to have caved to the most recalcitrant elements of the party. In a recent statement, for instance, he announced his intention to “put an ObamaCare repeal bill on the floor and pass it and put it on the president's desk...We are going to keep working to give families relief from this law while we work to dismantle and replace it altogether.”

Republicans have already tried 56 times to repeal ObamaCare, despite not having the veto-proof majority they need to pass it. They proceeded anyway because it provided them a talking point, a bit of red meat for the anti-Obama extremists. Obama will undoubtedly veto this bill as well, but that only matters if the aim is to pass legislation.

Like Ryan's decision to resuscitate the failed attacks on Planned Parenthood in 2016, the goal here is to placate the base, not to achieve a tangible legislative outcome. I'm not sure how Ryan plans to lift people out of poverty, but depriving women – particularly low income women – of essential health care services seems counterproductive.

Ryan may be earnest in his desire to transform the Republican Party, but he doesn't have the power to do it. The GOP isn't a “proposition party,” because that's not what Republican voters want. Getting things done in Congress is impossible without compromise, and that's a heresy in today's GOP.

It's not surprising that neither Donald Trump nor Ted Cruz attended this event. These are the two frontrunners in the Republican race right now – they define the party. And what they stand for (to the extent that they stand for anything) bears no resemblance to the “agenda” proposed by Ryan at this summit. Ryan can preach to party elites every weekend if he likes, but that won't solve their demand-side problem. Republicans have cultivated a sense of outrage and persecution mania in their base for years, and it's resulted in a presidential race dominated by Trump, Cruz, and Carson, all of whom are unserious protest candidates.

A party that allows Donald Trump to exist cannot be an "ideas party." Until Ryan and the Republican establishment deals with this reality, nothing else matters.