Powerball is a national disgrace: The lottery exploits despair, and state governments should be ashamed 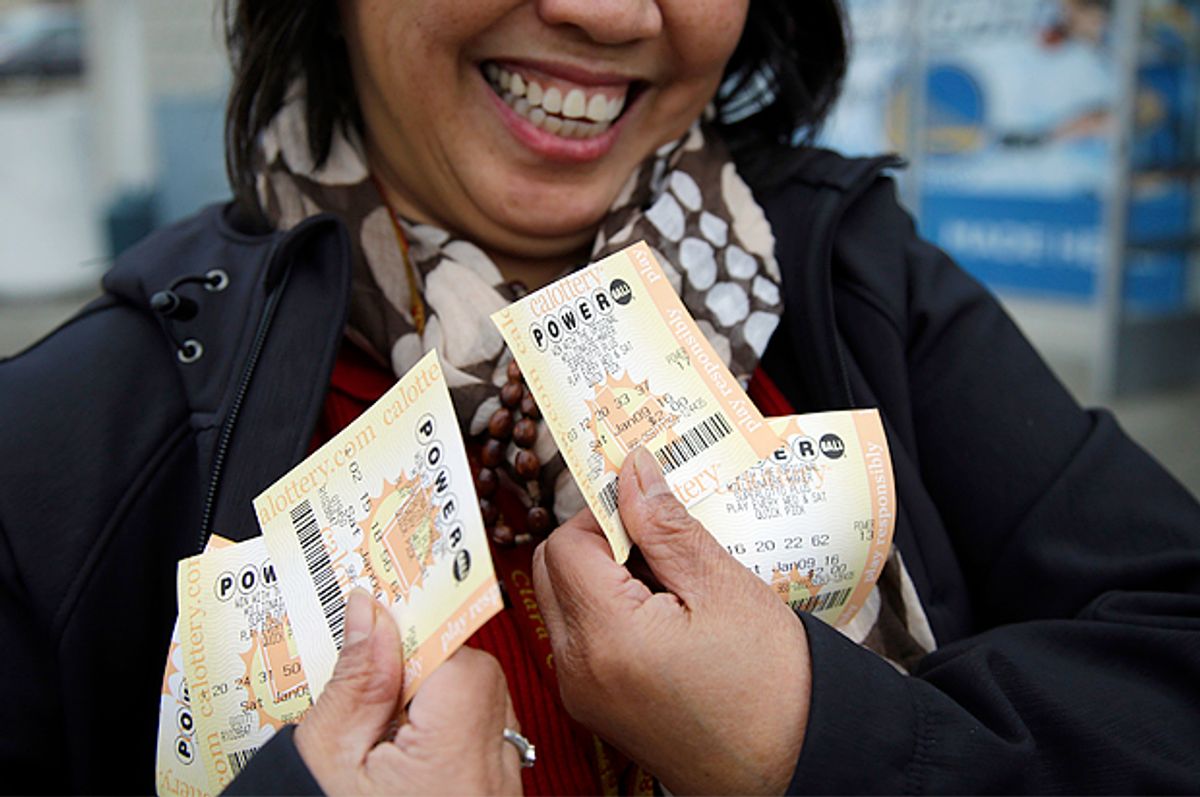 By now, you may have heard that the odds of a $2 Powerball ticket winning the grand prize, which is likely to be around $1.3 billion by the time of the next drawing on Wednesday, are 292.1 million-to-1.  State lotteries – 44 states participate in the Powerball game – generate revenue by exploiting various features of human psychology, especially the fact that we have trouble grasping the significance of extremely large numbers.

Here are a few examples of what the odds of winning Powerball actually represent:

Defenders of state lotteries like to claim that playing these games is merely a form of entertainment, rather than a rational investment strategy, and that $2 is a small price to pay in return for a chance to indulge in harmless fantasies of acquiring wealth uncountable. But the numbers tell a different story.

Americans spent $70 billion on lottery tickets in 2014, which works out to an average of $285 for every adult in the country. But that average is very deceptive. Nearly half of Americans never play the lottery, and of those who do, around 70 percent of the tickets are bought by 20 percent of the players. This latter group, which is made up of about one out of every eight American adults, spends an average of approximately $1,800 per year on lottery tickets. (By way of comparison, the average American spends $40 per year on movie tickets, and $50 on books).

More disturbing still, a startling number of genuinely poor people spend an astonishing percentage of their scarce discretionary income on the lottery. A recent study in Colorado found that people with a maximum household income of $15,000 – which means these households had an average income far lower than that – were almost as likely to play the lottery as the population as whole.

To some people such statistics are something to celebrate, since it means states have found a way to get people to “voluntarily” pay what is in effect a tax, which raises billions of dollars per year for government services of various kinds.

What this overlooks is that what drives much of the spending on lottery tickets, and especially the spending by poor people, is not some lighthearted search for a cheap thrill, but genuine despair. For tens of millions of Americans stuck pretty much permanently in various kinds of low-wage, no-benefit, dead-end employment, the infinitesimal chance of winning the lottery provides the only hope they have of changing their economic circumstances in a meaningful way.

Such widespread despair plays a key role in creating billion-dollar jackpots. And the eagerness with which almost every state government exploits the desperation of its most hopeless citizens is a national disgrace.