Sorry, David Brooks: In all his sadism, Ted Cruz is the true face of the Christian right 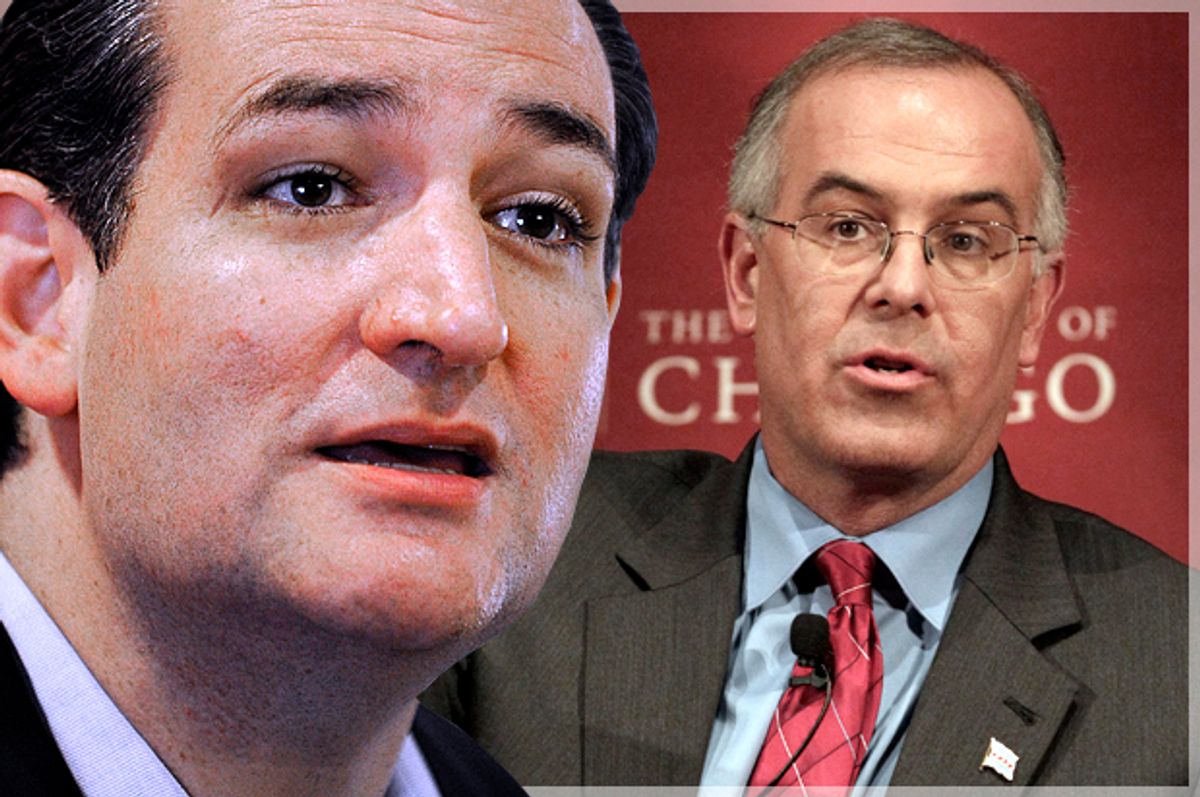 Sometimes David Brooks writes something so completely out of touch with reality that the reader's heart breaks at the pathos of it all, like you're watching a baby duck with a broken wing trying to fly. Then you remember that he's paid handsomely by The New York Times and given one of the largest platforms in the country to spout of his ill-informed opinions, and it's right back to be angry again.

So it is with Brooks' latest column, titled "The Brutalism of Ted Cruz," a piece that so hilariously misunderstands the motives of Christian conservatives that it leads one to wonder if Brooks has ever, in all his travels, met a single member of this tribe that his beloved Republican Party relies on for votes.

The piece starts off promisingly enough, with an anecdote about how Cruz, who Brooks correctly identifies as a scummy person whose main motivating emotion appears to be sadism, was so intent on keeping a man in prison for 16 years for stealing a calculator that he, in his position as the solicitor general of Texas, took the case to the Supreme Court. The man, Michael Haley, had been wrongly sentenced — the correct sentence was two years, which really still should be too much for shoplifting — but Cruz, in his eagerness to keep this man in prison as long as possible, fought until the bitter end to keep the state from rectifying the error.

"Cruz’s behavior in the Haley case is almost the dictionary definition of pharisaism," Brooks writes, "an overzealous application of the letter of the law in a way that violates the spirit of the law, as well as fairness and mercy."

This much is true. But the wheels fall off the argument almost immediately, as Brooks assumes that Cruz's levels of sadism, which are certainly high enough that I would hesitate to leave him alone with a beloved pet, is somehow a betrayal of Christian conservatism.

"Traditionally, candidates who have attracted strong evangelical support have in part emphasized the need to lend a helping hand to the economically stressed and the least fortunate among us," he writes. "Such candidates include George W. Bush, Mike Huckabee and Rick Santorum."

Oh man, just read those two sentences again. After you're done wiping the tears of laughter, from your eyes, just go back and savor those sentences. Is David Brooks for real? Or has his entire career up until now been an Andy Kaufman-esque put-on, a dry satire highlighting the absurdity of condescending Beltway conservative romanticization of their Bible-thumping brethren? Can anyone actually believe that these three men share a single bone of actual human compassion between them?

Perhaps. If so, it's time to face reality. "Compassionate conservatism" was never a real thing. It was always a feint, a beautiful sheep costume layered over the flea-bitten hide of the zealotry-driven wolves of Christian conservatism. The "compassionate" posturing has never been sincere, but an act meant to bamboozle soft-headed irreligious Republicans and well-meaning liberals seeking "common ground" with conservatives.

If you ever took even the slightest peek under the hood, this became immediately obvious. The last thing you want is some conservative claiming to feel "compassion" for you, because that's just a code word for the target they're painting on your back. Ask the women who've had their reproductive health care access stripped from them, because "compassionate conservatism" teaches that women are too foolish to decide for themselves if they should be having babies right now. Or ask the folks who, under the leadership of the supposedly "compassionate" Bushes, have seen access to medical care and other necessary services evaporate. Ask the people who were injured or had family members die unnecessarily because of government neglect after Hurricane Katrina. Or ask the thousands of Iraqi families who have lost family members because Bush oh-so-compassionately invaded their country because he really wanted to win something.

The reality is that Ted Cruz is what these folks have always been: Mean-spirited people who use religion as a cover for their desire to control and punish. Brooks isn't wrong that Christianity is supposed to espouse "humility, mercy, compassion and grace," but for the Christian right, that's always just been a handy disguise to wear while working on the true mission, which is control, punishment, deprivation, and abuse.

Brooks would have you believe that this turn towards the sadistic is a new one for the Christian right, "because in the wake of the Obergefell v. Hodges court decision on same-sex marriage, many evangelicals feel they are being turned into pariahs in their own nation." The problem with that argument should be self-evident. The only reason to oppose Obergefell in the first place is a desire to force your anti-gay views on strangers whose desire to get married has nothing to do with you. They aren't mad because they feel like "pariahs." They're mad because they are sadistic control freaks who are throwing a temper tantrum because they can't cruelly deny the right to marry to strangers. They want to hurt people, they were told they can't hurt people, and they're throwing a fit over it.

The mask has been slipping for years now. Witness Huckabee, who used to be able to hoodwink the rubes into thinking he's a jovial guy who just happens to love fetuses and stuff, but who has recently made it clear that he's just a mean-spirited dick who has a particular dislike of women. Remember his 2014 speech accusing the 99 percent of women who will use contraception at some point in their lives of being unable to "control their libido" and "helpless without Uncle Sugar coming in and providing or them a prescription each month for birth control"? That's the true face of the Christian right, a face that believes that the only reason a woman might choose non-procreative sex is she's "helpless" and out of control.

Cruz doesn't represent a shift in Christian right thinking. He just represents a shift in Christian right self-presentation. As with Trump supporters, conservatives of all stripes just seem to be done with pretending they are nicer than they are. They're sick of pretending they have compassion. They're exhausted with having to front like they're less bigoted than they actually are. All that pretending to care is just "political correctness", and the right is done with it all. They're stripping off the costumes and the masks and letting their true selves hang out for all to see.

And that true self is one that wants a man to go to prison for 16 years for stealing a calculator. And that's why Ted Cruz's star is rising right alongside Donald Trump's.