Throughout his film career, Bowie's dangerous sensuality had a uniquely destabilizing effect 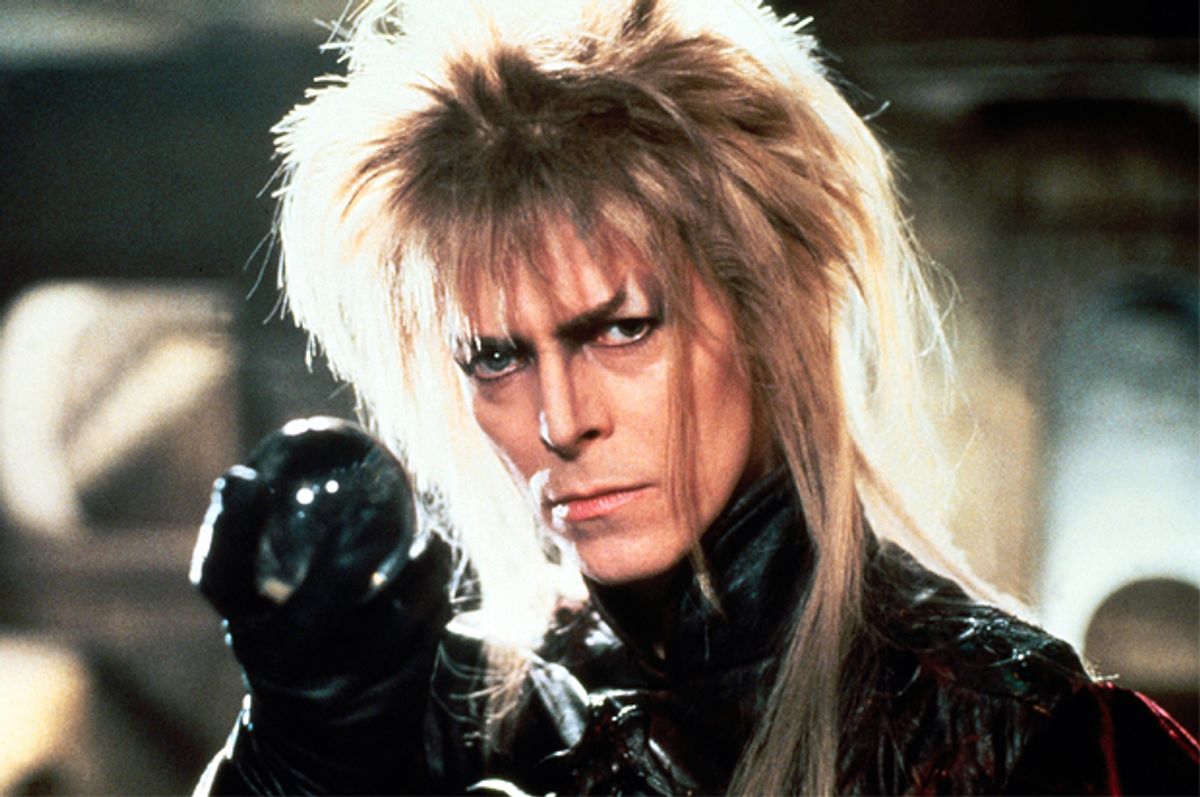 David Bowie famously didn’t allow Todd Haynes to use any of his music in his 1998 film "Velvet Goldmine," with the result that the film’s soundtrack and its imaging of an impossibly beautiful, alien (and yet all-too human) creature emerging from working-class England constantly refers to Bowie without us ever hearing his voice. The film both is and isn’t about him, and its references are at once pastiche, performance, evocation, reworking and homage. In this shimmering effect of not-quite Bowie-ness, "Velvet Goldmine" captures Bowie better than perhaps anyone else. What Haynes’ film emphasizes — the play with gender and sexual rules, the power of costume and personae, the sheer sexiness of alterity — is of course central to Bowie’s music, but it’s visible too across his acting career.

Bowie’s screen performances are always doubled: He’s always David Bowie at the same time as he inhabits a character. He can’t help this, of course. He’s David freaking Bowie and he’s never going to blend. But that doubling effect also describes his mode of queer performance, in which his gender, sexuality or, indeed, species is never taken for granted. In "The Hunger" (1983), he makes a convincing 200-year old vampire. Of course, Tony Scott’s film is a lesbian cult classic for its sex scene between Catherine Deneuve and Susan Sarandon. But even though Bowie’s character has been unceremoniously boxed in the attic by that point, the eroticism of the Bowie-Deneuve-Sarandon triangle imbues both the film and its production history with a potent cocktail of iconic stardom and bisexual potential.

His films are not always about issues of identity, gender or desire, yet on-screen he inevitably unsettles us in ways that are visceral and corporeal rather than didactic or deterministic. In "Labyrinth" (1986) he brings a thrillingly dangerous sensuality to the role of the goblin king, reveling in spiky, back-combed hair, strong eye makeup, and a series of New Romantic costumes whose plentiful ruffles never entirely distracted the eye from the tight pants. According to the film’s designer, he was costumed to be “a young girl’s dream of a pop star,” and Bowie as much as the costume department understood that dream to be vividly sexual. Reclining on a chair, tapping a riding crop against his boots, Bowie’s Jareth changed the dynamic of Jim Henson’s family adventure completely, and turned a new generation of young viewers onto his charms. Bowie dislodges normative ways of being and that’s a powerful thing for a filmmaker to work with. Throughout his career, he chose to collaborate with filmmakers who understood this and who made good use of his uniquely destabilizing effect.

Nic Roeg certainly understood the sublime potential of Bowie’s otherness, casting him as the alienated alien in "The Man Who Fell to Earth" (1976). Following "Performance" (1970), Roeg knew a bit about working with rock stars, but this is a different kind of film altogether. Bowie’s long, thin (yes, cocaine-fueled) body is never more exquisitely angular than in Roeg’s chilly compositions. The film deploys his bright orange hair and starkly pale skin in distorted mirror reflections and dramatic graphic compositions to construct a compelling physical strangeness that contrasts with the conformity characteristic of the film’s unforgiving modern world. As his sometime lover Mary-Lou says, “You’re really a freak,” adding, “I don’t mean that unkindly. I like freaks.” The film is also a kind of queer love story, about a woman who falls for a creature so different that she wets herself in shock when she sees his real face. Bowie is on record as having drawn from his alien persona, but the film equally used his stardom: The trailer trumpets him as “David Bowie: phenomenon of our time.” Bowie uses this seepage from art to life and back in his performance, combining the outsider style and androgyny of his rock star persona with the unassimilable difference of the fictional alien. Does he attract crowds because he is a star or a star man? He is both at once and despite his desire to go home, we want him to stay with us on earth.

Many commentators have written movingly about what David Bowie meant to them as young queers in the 1970s; how he radically changed what and how it was possible to be. I was a little younger, a teenager in the 1980s, but through the time-honored conduit of my friends’ older siblings, I was listening obsessively to "Hunky Dory" and "Ziggy Stardust" alongside Lou Reed, the Buzzcocks and the Undertones. The "Ashes to Ashes" video may have opened up a fledgling sense of the utter beauty of being weird, but as a wannabe cinephile, it was Bowie’s movies of the period that ended up playing a transformative role in my life. In the 1980s, British television’s film programming was radical by today’s standards, and I watched "Merry Christmas Mr. Lawrence" (1983) with my parents when I was about 13.

Nagisa Oshima’s film is complex and resonant, a rare assemblage of talents from Ryuichi Sakamoto to Takeshi Kitano and Tom Conti. But what seduced me utterly was the perfect meshing of Oshima and Bowie’s perverse coolness. The scene in which Bowie, playing New Zealand prisoner of war Major Jack Celliers, kisses Sakamoto’s Japanese Captain Yonoi is surely burned into the memories of many a young pervert, and the film is not only homoerotic. The high-stakes power dynamic in this forbidden attraction crackles throughout, and Bowie manages to look at once rebellious and louche while shackled by the wrists and more so when finally buried in the ground and bound with rope around his chest. There’s a lot else going on in the film but I hope it’s no disservice to Oshima to say that as a young viewer, I experienced "Merry Christmas Mr. Lawrence" as at once a sexual and a cinematic revelation.

A couple of years later, my local arthouse cinema played "In the Realm of the Senses" (1976), Oshima’s disturbing and pornographic art film, which had the equivalent of an NC-17 rating. I had only heard of it because of David Bowie and that was more than enough to get me to the cinema. I sought out Nic Roeg’s other films too, and Catherine Deneuve’s. My love of cinema and its transgressive potential was prompted in no small measure by Bowie’s performances, and his presence in a film has always signaled something unpredictable and mesmerizing. In David Lynch’s "Twin Peaks: Fire Walk With Me" (1992), his mere appearance in a security video throws even Lynch’s already surreal world off balance. His charismatic performance as Nikola Tesla in Christopher Nolan’s "The Prestige" (2006) brought a sense of real magic to a film intimately concerned with performance, trickery and doubling. And in a beautiful video, he returned to the kind of gender ambiguity with which he began his career in 2013’s "The Stars (Are Out Tonight)," swapping bodies with Tilda Swinton, and singing opposite Andreja Pejic as the echo of a younger Bowie. The platform may have changed but my excitement to see Swinton becoming Bowie becoming Pejic, as boundaries of gender and age disappear, surely echoes the feelings of those first viewers amazed by Bowie’s physical presence. His film performances are rightfully overshadowed by his music, but watching David Bowie on-screen taught me something crucial about the potential of cinema to rewrite social rules and to imagine radically new forms of being.

Rosalind Galt is a professor of film studies and author of "The New European Cinema: Redrawing the Map" and "Pretty: Film and the Decorative Image," as well as editor, with Karl Schoonover, of "Global Art Cinema: New Theories and Histories."