Denial, paranoia and bigotry: Obama warns against Republican ugliness and they immediately prove him right 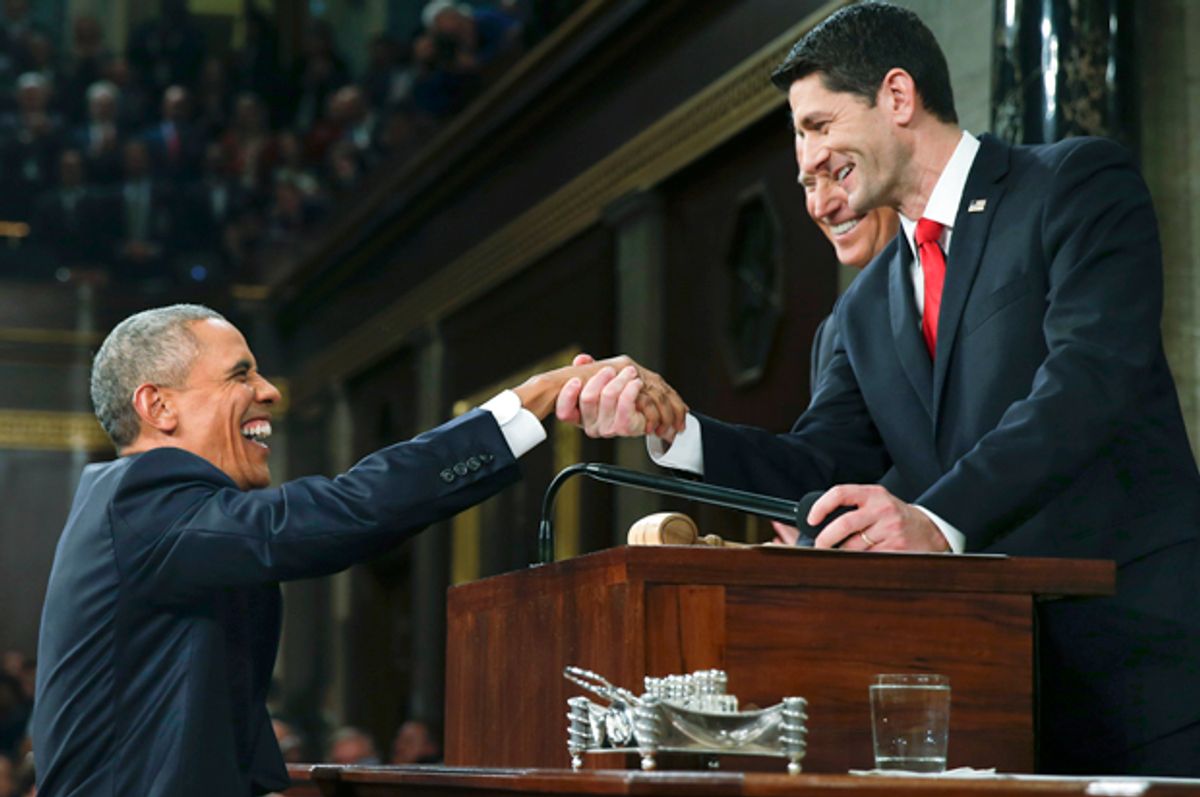 Barack Obama is welcomed by Paul Ryan and Joe Biden prior to delivering his final State of the Union address, January 12, 2016. (Reuters/Evan Vucci)
--

In the days and hours before President Obama's final State of the Union address, the White House was sending signals that he planned to go out in style, releasing a dramatic movie trailer-style video, complete with a sly reference to the smash Broadway hit "Hamilton." And sure enough, the song "One Last Time," about Washington's farewell address to the nation, seemed to have its influence, with its themes about blowing off critics who say you are weak and the wariness of partisan divisiveness.

Obama hit all the requisite marks for a State of the Union address: Cataloging past successes, describing current obstacles, outlining bold plans for the future. But, at its heart, the speech was ultimately a lengthy rebuttal to — and a warning about — the metastasizing ugliness and hatred that is pouring out of the conservative movement and the Republican Party that relies on this increasingly vitriolic, hateful conservative base.

No matter what he was talking about, Obama would bring the topic back around again to this issue. Without naming names, he made his point very clear: Conservatives, and the Republicans who pander to them to get their voters, have reached frightening levels of science-denial, hysteria, paranoia, and bigotry, and if they don't turn back now, things could get very bad.

On climate change denialism: "Sixty years ago, when the Russians beat us into space, we didn’t deny Sputnik was up there."

On Republicans who lie and claim Obama kowtows to Islamic terrorists: "If you doubt America’s commitment – or mine – to see that justice is done, ask Osama bin Laden."

On pandering to bigotry: "As frustration grows, there will be voices urging us to fall back into tribes, to scapegoat fellow citizens who don’t look like us, or pray like us, or vote like we do, or share the same background."

This is just a sample, but over and over, Obama would hit this point, that the toxic, irrational politics of the right have stopped being a mere nuisance, but have become a real threat to this country.

This speech will no doubt be read as a lengthy subtweet aimed right at Donald Trump. And obviously, Obama was thinking of Trump when crafting this speech. How could he not be?

But really, this speech was about a lot more than Donald Trump. After all, the rhetoric he calls out, from the science denialism to the racism to the homophobia to the anti-Muslim bigotry, has become standard issue in Republican circles.

And, as if to prove his point, Obama had the benefit of Speaker of the House Paul Ryan, sitting right there over his left shoulder, trying with all his might to radiate utter contempt for every word coming out of the president's mouth.

It really does not seem that @SpeakerRyan is happy with this year's #SOTU. pic.twitter.com/JZIVI4iGGB

You get the feeling he practiced his sourpuss face in the mirror before heading out, and his resolve to convey disdain quickly became comical as he refused to clap for anything, even the president saying we ought to find a cure for cancer. (He caved and gave a few hand flaps for veterans.)

The reason for this strategy is obvious enough. Ryan compromised with the president on a budget deal late last year and was immediately denounced widely in conservative circles as a traitor to the cause, because he wasn't willing to keep pushing their failed strategy of using the threat of a government shutdown as blackmail. At the top of the speech, Obama told Ryan that he appreciates "the constructive approach you and the other leaders took at the end of last year to pass a budget" and Ryan visibly squirmed, no doubt knowing that any praise from a man conservatives consider the great Satan will just hurt his brand further.

In other words, Obama's point was made. Obama kept tossing out easy lines for Republicans to applaud to show that they aren't bigots---stuff like denouncing mosque burnings or saying that we are all American first---but it has gotten to the point where even banal denunciations of bigotry appear to create real fear of turning off the conservative base.

And if the ugly vibe coming off Republicans in the House chambers wasn't enough, Nikki Haley's official rebuttal speech really made Obama's point for him. Yes, Haley was clearly using the speech to campaign against Trump on behalf of, well, anyone else in the race.

However, her speech made it clear that the objection to Trump is almost entirely aesthetic, with her jab about "the loudest voice in the room". But on the substantive issues, Haley made sure the conservative base knew that the Republican Party fully supports this vortex of bigotry and paranoia they've been sucked into. And in doing so, she proved Obama right.

For instance, Obama's point about how it's irresponsible to exaggerate the dangers of terrorism or to imply that he's secretly working for the other side? Haley did just that: "Even worse, we are facing the most dangerous terrorist threat our nation has seen since 9/11, and this president appears either unwilling or unable to deal with it."

Or Obama's warning about exploiting anti-Muslim bigotry to pander to bigots? Oh yeah, Haley did that, too: "And in this age of terrorism, we must not let in refugees whose intentions cannot be determined." (Her implication that we do so is a flat-out lie. Refugees have a lengthy process, of an average of 18-24 months, of vetting to get into this country.)

Perhaps the worst part of her speech, however, was when Haley exploited the hate crime committed in her state — a mass shooting at a black church that took the lives of nine people — to pander to racists who want to believe the Black Lives Matter movement is deliberately instigating riots: "We didn’t have violence, we had vigils. We didn’t have riots, we had hugs."

“We didn’t have riots, we had hugs” is such a slap in the face to communities that had real and deep seated problems.

Haley is praised for her conciliatory rhetoric but that line reveals how much she’s also perfected the use of dog whistles.

In his speech, Obama warned about those who promise "to restore past glory if we just got some group or idea that was threatening America under control."

It's not just Donald Trump. The woman the Republicans flagged to offer their official rebuttal used her speech to do just that. Haley used her speech to take swipes at refugees, at immigrants, and at protesters who are trying to reduce police violence. She  went about as low as you can go, weaponizing the loss of innocent lives to chastise people who are trying to stop the loss of more innocent lives. She was exactly the threat to "rational, constructive debates" that Obama warned about.

It may seem strange to see a president use his last State of the Union address to focus so much on the ugly, divisive rhetoric of the right. But at least he had his Republican colleagues on hand to prove how right he was to do so.