“I believe in change, because I believe in you”: Obama brings his Jed Bartlet game to his final State of the Union 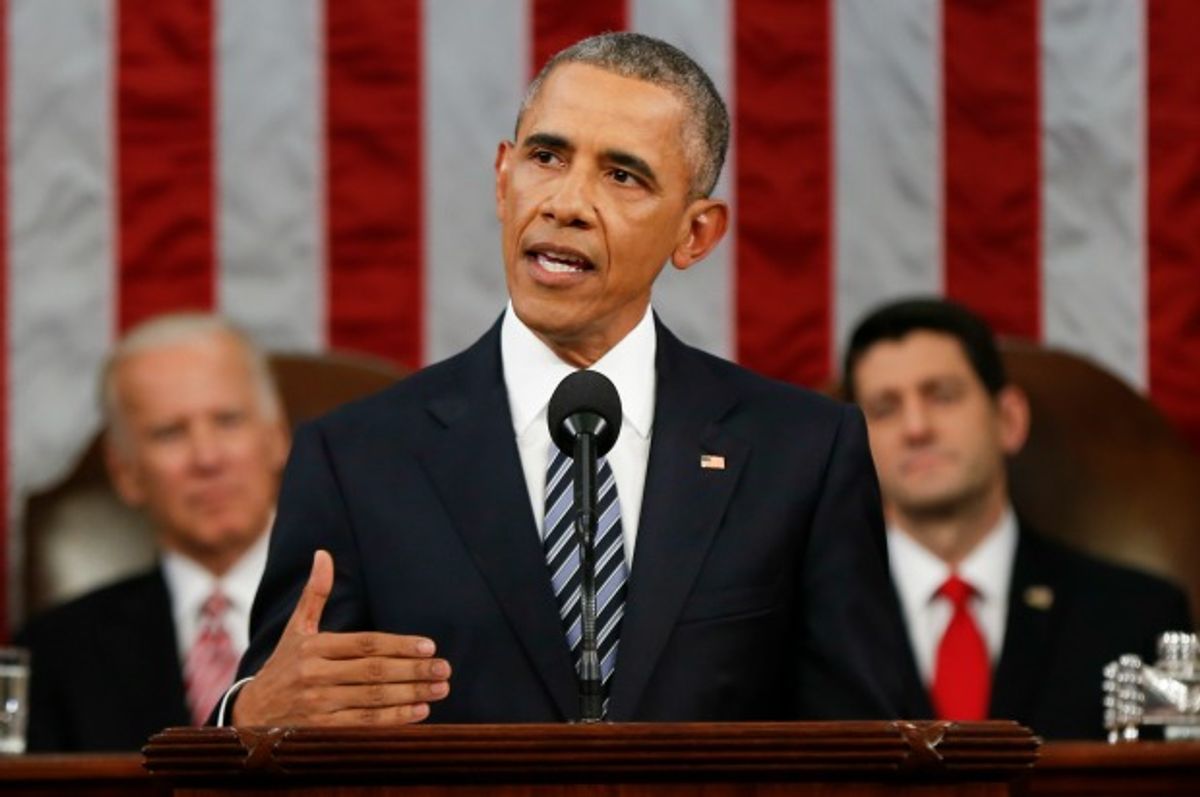 President Barack Obama has a commanding presence over most proceedings, and last night’s State of the Union—his final—was no exception. But as he carried on, detailing policy and ideals in such a reasonable, calm, and well-meaning manner that it induced me into a lull of comfort, I found that my eye kept drifting over Obama’s left shoulder, past his gestures, to where Speaker Paul Ryan sat with studied petulance.

I grant that it is not easy being on the right side of a television screen while the president of the United States is speaking. Your job, as a face on the right side of the screen, is to emote appropriately—because an entire nation, theoretically, is watching—and, failing that, to at least not fall asleep, as Marco Rubio appeared to do. But Paul Ryan managed to make it look like rocket science, evoking Andy (Paul Rudd)’s over-the-top, pained inability to pick up his plate in “Wet Hot American Summer.” In her term as Speaker, Nancy Pelosi was radiant and unruffled; John Boehner, meanwhile, emoted so fiercely that he changed colors. Ryan looked bored, engaging in the odd habit of conversing with Vice President Joe Biden while the president was speaking, looking nothing more like a kid sneaking in a conversation at the back of the class.

Most of President Obama’s State of the Union addresses have not particularly memorable. The State of the Union has had to incorporate all manner of policy, which never quite has the same sticking power as an impassioned call for reason. Fortunately, Obama has done that in other arenas—during his campaign, when he addressed the Jeremiah Wright controversy, and in Charleston, South Carolina, when he addressed the mourners of Clementa Pinckney at Mother Emanuel A.M.E. He did it just last week, when he spoke on gun control and Sandy Hook. This State of the Union didn’t have quite the same fire and brimstone that we now know Barack Obama to be capable of. But as far as speeches made to a joint session of Congress go, it was a worthy installment.

And over his shoulder, floating on the right side of the screen, Ryan became the president’s doppelganger. Obama spoke; Ryan was silent. Obama routinely waited for applause; Ryan pointedly did not stand up or clap until after the midway point. Obama was unafraid to point to their bipartisan work, or to crack a smile, or laugh, when necessary, along with his audience. Ryan seemed petrified of any possible connection to the president and even manfully stifled a joke so as not to appear too jovial. And where Obama was engaged, thorough, and hopeful, Ryan looked checked out; bored, cynical, and superficial. Obama was trading on his ideals for the speech; Ryan was focused on the political expedience of selective bursts of applause.

The contrast between the two served as a lodestone for the rest of the evening and a marker of things to come, as the Obama presidency officially begins its last year running the country. The president’s speech was marked by an idealism that even as far back as 2008 has been compared to Aaron Sorkin’s “The West Wing,” an NBC drama with a fictional liberal administration and an awful lot of fast-talking high-mindedness. Last night, a whole mission statement from President Bartlet (Martin Sheen)’s 2002 State of the Union made it into President Obama’s, too: The promise to eradicate cancer, a glorious pipe dream if there ever was one. The address was somewhere between high-school lecture and Sunday school—a patient, detailed attempt to explain what is right and good about America, to an audience that would have much rather been elsewhere.

It’s a faith in humanity—and specifically, in America—that is unique to Obama, and has already become part of his legacy. The candidates from both parties for this November’s election are not nearly so hopeful about a bipartisan mission and the nationwide identity of America. The president’s closing lines—“I believe in change, because I believe in you”—is an expression of idealism that eight years with a deeply entrenched Congress should have rendered impossible. Certainly, Obama cannot possibly believe in elected Republican officials. And yet here he is, trying to break down American values, the fundamentals of the economy, and the benefits of increased access to healthcare in just a few short minutes, as if the problem is that Republicans just don’t understand how to fix America, but once they do, everything will be rosy. The other possible reality—the reality of a party too obsessed with selfish defense of privilege to practice actual public service—just isn’t in Obama’s equation.

President Obama’s speech seemed to exist in a different universe entirely from the CNN commentators discussing it immediately afterwards, who tore it apart for its campaign implications and came up short. (Obama acknowledged the election cycle, but refused to name any names, in either endorsement or condemnation.) In that sense, they existed in the same plane as Paul Ryan To Ryan, there is only the reality of his reputation as a Republican and a web of rhetoric that keeps him in office. And the GOP knows just how badly a civil relationship with Obama can hurt them in the polls; after all, the president was the albatross that sunk Charlie Crist, down in Florida. (Crist hugged Obama in public. It proved to be too much for the Republicans in the state.) It’s a sad story, really. . Obama put his heart into a speech about ideals and identity and the future, and Ryan sat just a few feet away from and didn’t understand or absorb a word of it.