Inside the right wing's epic Obama meltdown: How their SOTU response showed the bankruptcy of their ideas

The GOP's right flank was beside itself last night, finding impressive new ways to throw a temper tantrum 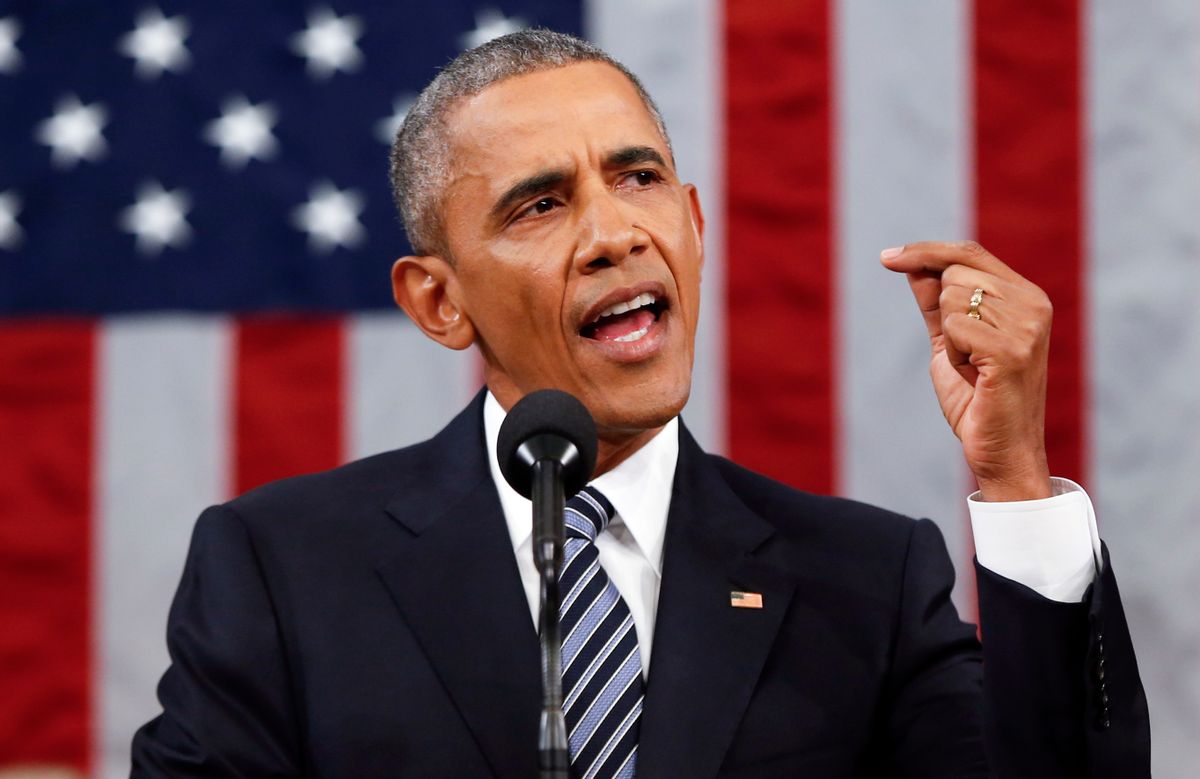 President Barack Obama delivers his State of the Union address before a joint session of Congress on Capitol Hill in Washington, Tuesday, Jan. 12, 2016. (AP)
--

It was kind of sad last night watching the final Obama State of the Union address and noting the difference between the progressive euphoria that accompanied his speeches in the early days and the rather blasé response this one evoked. He's still a wonderful speaker and the speech was filled with the kind of sentiment that has always melted the hearts of Democrats everywhere. But they've been there and done that and the lame duck blues are upon them.

It was, as always, interesting to watch the response of the Republicans, both in the audience and online. Needless to say, they were not impressed. The elected representatives in the hall managed to hold themselves back from screaming "you lie!" or blatantly rolling their eyes, but they managed to convey their disgust nonetheless. The online right didn't hold back.

For instance, when President Obama said the U.S. was still the most powerful nation in the world, commenters at Fox News anchor Megyn Kelly's Facebook page let fly. This pithy comment is representative:

"Has he been in another world for the last 7 years? America has declined every day under his failed weak ideological disjointed illogical politically motivated attempt at leadership."

It wasn't long ago that Republicans would have considered such a reaction to be fighting words. Recall Jimmy Carter's so-called "malaise speech" which made conservative heads explode for decades. For many years, anyone who even whispered that America was less than perfect in any way was called a member of the "blame America first crowd." During the Bush administration those who questioned the war were asked, "Why do you hate America so much?"

Times have certainly changed. Today the campaign book of the GOP's presidential frontrunner is called "Crippled America." It is an article of faith that our military is so degraded we cannot possibly defend ourselves. It is assumed that everyone around the world once loved us and now loathes everything we stand for and the patriotic right, which once lived by the mantra "love it or leave it," now blithely asserts to anyone who'll listen that the United States is no longer the best country in the world. Who would have ever thought that was possible?

As is so often the case, the reality is very different from Republican perceptions. According to a recent Pew Poll on global attitudes about America, nearly 70 percent of the world's nations approve of the U.S. and President Obama and support his policies against ISIS. Half think of the U.S. as the world's greatest economic power. What they don't care for are GOP policies, like torture. (We happen to be one of the few developed countries in the world in which a majority of the people support the practice.)

But Luntz's focus group was interesting in other ways that are somewhat surprising considering the polarized political system and the tenor of the GOP presidential campaign. Yes, the Republicans in the group were most upset at Obama's proposal to close Guantanamo. (One, who was clearly misinformed, said she was angry because all the prisoners were joining ISIS.) And they disagreed strongly with his stand on immigration. But there were some surprising meeting of the minds as well.

Members of both parties agreed that Social Security and Medicare had to be preserved and that college should be affordable and make students job-ready. And Republicans even conceded that the two parties should cooperate. But all that is fairly predictable. The big surprise of the night was the Republican reaction to Governor Nikki Haley's rebuttal speech. Luntz's group gave it the best rating one of those speeches has ever gotten and rated it higher than the President's speech before it. And the part they all liked best was this, with Republicans surprisingly agreeing in higher numbers than Democrats:

"We need to be honest with each other, and with ourselves: While Democrats in Washington bear much responsibility for the problems facing America today, they do not bear it alone. There is more than enough blame to go around.

“We as Republicans need to own that truth. We need to recognize our contributions to the erosion of the public trust in America’s leadership. We need to accept that we’ve played a role in how and why our government is broken."

She went on to make a case for the country to be welcoming toward immigrants and religious minorities and she did it in a way that was clearly challenge to the front runner, Donald Trump. Luntz's group liked what she said about all of that.

But the right-wing media immediately became hysterical. Breitbart columnist John Nolte was livid at the RNC for allowing Trump to be even slightly criticized. He wrote:

"To the glee of our corrupt media, Nikki Haley is attacking our own frontrunner. The GOP Establishment is garbage."

Ann Coulter let loose with a flurry of screeching tweets best summed up by this one:

(To be fair, she also criticized Paul Ryan for politely applauding once when President Obama said something decent about immigrants.)

It's possible that Frank Luntz's focus group (which isn't really a focus group at all) does not reflect the views of any substantial number of Republicans. These "dial" demonstrations are as much parlor game as they are legitimate research. But wouldn't it be nice if it really did reveal that the rank and file GOP are willing to listen to someone who says that the party has to take some responsibility for the state of our politics today? That a Republican leader could still say that welcoming immigrants is still an American value?

The angry right-wing media will have none of that, obviously. That would go against their business model. But for all the misplaced anger at President Obama and the mountains of misinformation that motivate the right these days, it is optimistic in some small way that the GOP leadership put Haley out there, with this message, at this moment. Maybe there's hope for the Republican Party after all.