Pretending it's not a gay takedown: Pat Roberts, the GOP and the bigotry driving the stalled nomination of Eric Fanning

Eric Fanning, who is openly gay, steps down as acting army secretary after the GOP put his confirmation on hold. 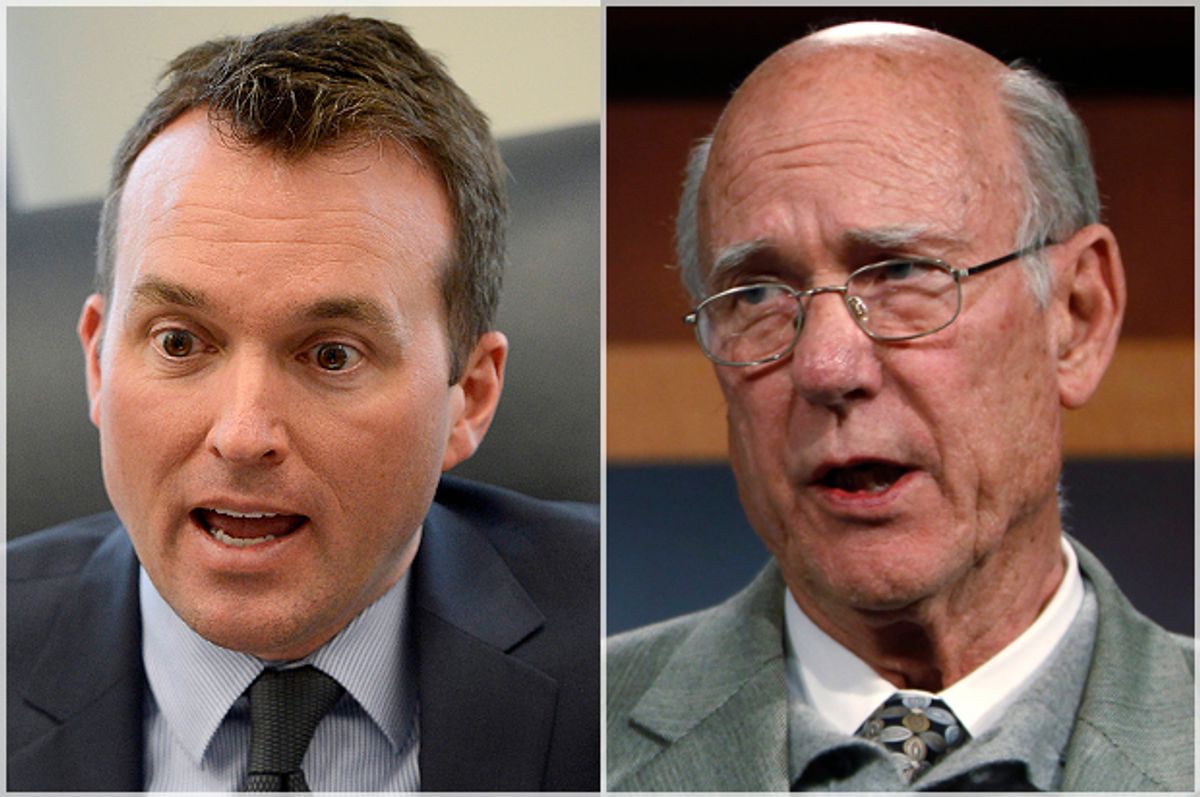 Last fall, President Obama drew criticism from leading cultural conservatives, including former presidential candidate Mike Huckabee, for nominating Eric Fanning for the post of secretary of the Army. The nomination was a historic first because Fanning is openly gay, and no openly gay person has ever led a branch of the military. Huckabee and others claimed that the Fanning nomination was a presidential pander and “appeasing America’s homosexuals.”

Sen. Pat Roberts, who has a decidedly anti-gay record, has put a “hold” on Fanning’s confirmation in the Senate. Roberts, a Kansas Republican, says he put the hold in place as a protest of Obama’s potential executive action to close the detention facility at Guantanamo Bay, Cuba. Of course, there are dozens of other ways to protest, block and/or slow that process, but blocking Fanning’s confirmation kills two birds with one stone. He can voice his opposition to closing Guantanamo Bay, and continue to build upon his unblemished anti-gay record. The truth is, if Gitmo was the primary motivation for holding up holding up Department of Defense appointments, then Roberts would have also put a hold on Under Secretary of the Army Patrick Murphy, who was confirmed as the number two civilian in the Army earlier this month. Murphy isn’t gay.

What’s at play here isn’t anything new from the GOP. It’s what I call the “any reason except that they’re gay takedown.” I wrote about it my book, No Hope: Why I Left the GOP (and You Should Too). You see, discrimination against gays because they are gay is unacceptable in America today, so the anti-gay crowd searches for another reason to point to as their reason to “take down” and discriminate against gay people.

In 2011, after over two years of fighting protests and boycotts from conservatives because the organization for gay conservatives I co-founded, GOProud, was a sponsor of the Conservative Political Action Conference (CPAC), GOProud was finally banned from CPAC, but “not because we were gay.” The organizers of CPAC, the American Conservative Union, pointed to a statement from another of our co-founders about a prominent conservative in which he called her a “nasty bigot” as the reason they banned the group. They said reason was “incivility,” not that we were gay. So after two years of fighting  attacks because we were gay, they found one thing to point to as the “reason” to ban the gay group from sponsorship.

In 2012, Republican presidential nominee Mitt Romney hired the former United States Spokesman at the United Nations, Ric Grenell, to be his campaign’s foreign policy spokesman. Grenell was eminently qualified for the job, but prominent cultural conservatives raised objection because he's openly gay. They charged that he would secretly lobby Romney to support gay marriage. Grenell was sidelined on the campaign after some of his opponents found controversial tweets he had posted. For most in politics, an edgy Twitter feed is a badge of honor, but not for the gay. Tweets were the “reason” Grenell eventually left the campaign, but “not because he was gay.”

This is nothing new in America, and I know that it’s not just anti-gay Republicans who do it, but it’s become commonplace among anti-gay conservatives in politics. It’s part of their strategy now. They are fighting cultural evolution and they reject the reality that openly gay people are part of modern life America today.

This week, Eric Fanning stepped aside as acting army secretary pledging to return to the job if he is confirmed by the Senate. If I were Eric, I wouldn’t hold my breath for that. Roberts is doing what the anti-gay crowd in the GOP does. Roberts isn’t going to allow a gay person to come up for a vote for such a big job, but it won’t be because he is gay. In this case they will point to Guantanamo Bay in their any reason except that they’re gay takedown.